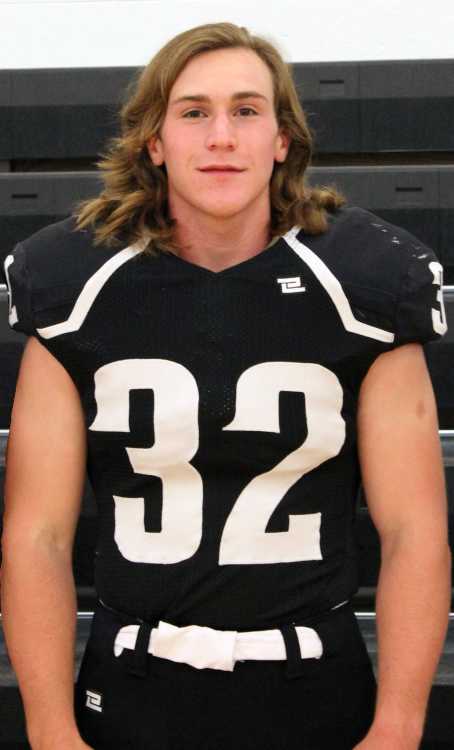 Friday Night Lights football Heroes. Wish they had this when I played. So many deserving players back in my day. I may have to do a retro version of this in the near future, but for now…………...Part 3………...2018

*Christian Timm - Eustis-Farnam - Better be sitting for this one. This dude has to be one of 6-Man football’s best players...period. A week ago, the 5-10, 190 pound senior opened the season by rushing for 382 yards and 9 TDs and six PAT kicks (2 points each) and 62 total points in Eustis-Farnum’s 69-39 win over Creek Valley. Last week things got a little tighter for the Knights in their 72-61 victory over South Platte, so Coach Bryan Fangmeyer had to “lean” on Christian a bit more. And the result….

Last season, Eustis-Farnam won only two games all season, losing 6. Despite that fact, Timm rushed for 1,346 yards (15 TDs), caught 9 passes for 231 yards and 2 TDs, compiled 546 yards on kick returns (2 TDs), and another 32 on punt returns. On defense, the Eustis-Farnam star made 86 tackles (47 solos), intercepted 7 passes, recovered 4 fumbles, returned one fumble for a TD and scored another on a Pick 6.

Christian also averaged 40 yards on 6 punts, averaged 39 yards each on 3 kick-offs. He ended the year with 2,323 total yards and 21 TDs and I’m not going to tell you he drove the bus, laundered the team jerseys and provided the food after away games, but the bottom line…...Christian Timm is an amazing football player and will be a 1000 yard rusher after just 3 games.

Down 20-0 with 10:03 left in the 2nd quarter, the Stormdogs fought back to take a 28-20 in the 3rd frame and kept using their depth to finally wear down a determined Fullerton squad, 44-32. It was four straight Keaton Van Housen touchdown runs, buoyed by some serious Osceola/High Plains blocking that gave the Stormdogs the lead…..temporarily.

Fullerton fought until the end, but Van Housen and friends finally prevailed. The 5-10, 180 pound junior concluded the evening with 281 yards on 24 carries and 6 TDs. Keaton’s scoring runs came from 15, 2, 49, 53, 37 and 2 yards out. We cannot end things here because every coach, player and serious fan knows that Keaton Van Housen could not have racked up those stats without some sweet blocking…..and let me tell you, those boys from Osceola/High Plains know how to run and pass block. Big Time.

There were more, but time does not permit. Big thing about Keaton Van Housen and this TJ Nielsen/Greg Wood coached football team is they have depth, know how to block and tackle, and are beginning to know they have talent. Currently rated #8 in Class D-1.

*Josh Bailey - Johnson County Central - Escaped for 175 yards on 18 carries and 3 touchdowns in the Thunderbirds 48-13 route of Louisville. That gives Bailey 541 yards and 6 TDs after just two outings this season.

*Carter Terry - Grand Island Northwest - Record setting senior sharpshooter has hit the ground running for the 1-1 and 7th rated (Class B) Vikings. Terry has ben on target with 65% of his 49 pass attempts, good for 459 yards, 6 TDs and only one INT. That’s awful good for a quarterback that lost two 1000 yard receivers from last season.

The 6-0, 185 pound rifle-armed Viking QB, one of the most prolific passers in Class B history, has completed 385 of his 675 career passes for 5,489 yards and 63 touchdowns. Carter has averaged 203 aerial yards a game in his 27 career starts for head coach Kevin Stein. All-State Class B quarterback a year ago.

*Wyatt Cast - Centennial - All-State quarterback was close to passing perfection in the Broncos 33-14 win over Malcolm. Cast was true on 14 of his 15 aerial attempts for 177 yards and four touchdowns. Jackson Hirschfeld, Ryan Payne, Max Tomes and Ian Schlueter all were recipients of Wyatt Cast scoring passes in the game.

*Jacob Herbek, Dietrick Stolz - Grand Island Central Catholic - Herbek, the 6-6, 210 pound TE/DE, has been a terror from his defensive end position through two games for Tim Dvorak’s Crusaders. The hulking Herbek, who already has a Division One football offer from South Dakota State, has made 22 tackles, 16 of which were solo crunches. The DE also has 9 tackles for losses, 3 quarterback sacks, 2 recovered fumbles and a defensive touchdown in just 2 games.

GICC place kicker Dietrick Stolz has been rock solid with his early season PATs and field goals. The junior has hit 10 of 11 extra point attempts and is also 3 for 3 on FGs, one coming from 42 yards away, another from 47 yards out.

The Class C-2 Crusaders are currently 2-0 in 2018 after going winless against a brutal Class C-1 schedule a year ago. Head Coach Tim Dvorak, a former standout GICC football player himself, has this program on the right track in just his 2nd year at the helm.

*Jack Wiebelhaus, Jaylon Walker - Omaha Bryan - Omaha Bryan quarterback Jack Wiebelhaus was brilliant (again) in the Bears 28-42 loss to Omaha South. The 3 year starter completed 24 of 43 passes for 327 yards and 3 TDs in the loss. The senior gunslinger has now hit 41 of his 70 pass attempts for 694 yards and 9 TDs with only 1 INT in his first two games of 2018.

Big 190 junior RB Jaylon Walker also had a good night for Bryan, rushing for 168 yards on 17 carries. Walker has rushed only 29 times in two games, but has still gained 345 yards, an average of 11.9 yards a tote. That’s pretty nasty in Class A.

*Kade Hegemann - Howells-Dodge - A lean/mean tackling machine for head coach Mike Speirs at Howells-Dodge. A head hunting, rock solid hitter at 5-10, and hundred fifty pounds, Kade Hegemann has already 33 tackles in the Jags first two games. Out of those 33 stops, 17 are solos, 9 are for losses and 2 are QB sacks.

*Mason Schleis - Shelby/Rising City - 5-11, 165 pound QB was a never ending nightmare for Sandy Creek last week. In the Huskies 48-0 win over the Cougars, Schleis completed 11 of 15 passes for 150 yards and 3 touchdowns and ran the ball 10 times for 129 yards and two more scores.