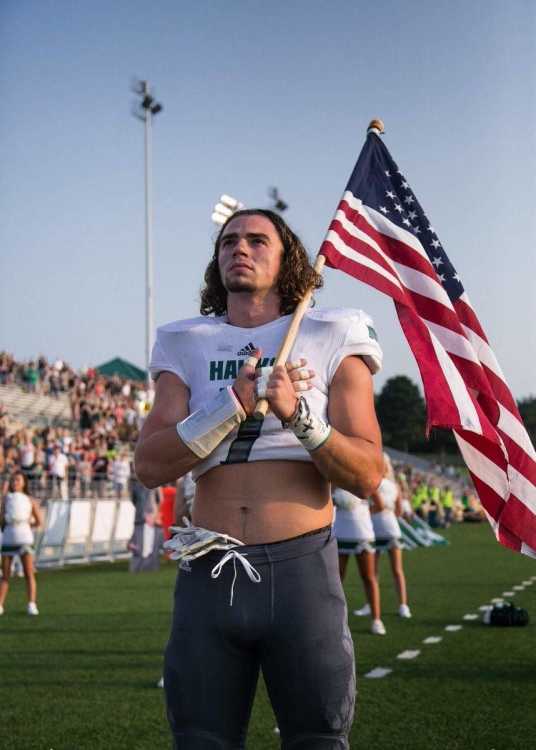 Onward and upward we go with Part Two of our Friday Night Lights football Heroes. I recognize these athletes in no particular order by the way, so a salute in Part 2 or 3 is just as important as Part 1.

*Caden McCormack - Lincoln Southwest - 6-2, 217 pound Division One prospect was very effective in the Silverhawks 43-0 blanking over Lincoln North Star. McCormack carried the ball only 9 times on offense, but turned those touches into 100 yards and TD runs of 60 and 9 yards.

On the 60 yarder, the senior physical specimen took the handoff, ran straight off tackle, then quickly planted and cut to the outside, easily outracing the Gator secondary to the end zone. And his moves were so fluid, not one defender laid a hand on him the entire play. On the 9 yard score, McCormack drug 4 North Star defenders into the end zone with him..

Caden was also a standout on defense, making 10 tackles from his LB position. Number 7 also tipped a pass that was promptly intercepted by teammate, Taylor Boutmahavong.

By the way, I saw an elderly lady at the State Fair tonight with a sign that read “Free hugs”, and I thought to myself, Caden McCormack was giving out free hugs last Friday night on defense too, but they were of the “bear hug” variety that ended with a deposit on the Seacrest Field turf.

*Cedric Case - Lincoln High - Well, you can’t win ‘em all, but you can certainly look as if you did when you put up the kind of numbers Cedric Case produced in the 49-43 overtime loss to Bellevue West last week.

Case, last year’s Super-State QB, filled the Bellevue West air with 49 passes, completing 33 of those for an incredible 434 yards and 2 TDs. Cedric, who engineered a furious second half Links comeback, also ran in a score from a yard out to aid the cause.

His favorite targets in the heartbreaking loss were CJ Jones, who caught 9 Case aerials for 155 yards and a 73 yard TD reception thrown in there. Morgan Perry hauled in 8 passes for 66 yards with a 32 yard TD catch in the mix.

Cedric Case, the North Dakota State commit, now has completed 68% of his 489 career passes for 5,129 yards, 54 TDs with only 9 INTs. And, the sharpshooting Lincoln High product looks much bigger than a year ago to boot. What a player!

*Ashton Hausmann - Norris - Last season Ashton blocked for two-time 1000 yard rusher Austin Schultz and was a 41 tackles beast on defense for the Titans. This year Hausmann earned his shot to assume the featured back with Schutz graduating last May.

The fleet, powerful runner, who has sprinted a :10.6 hundred meters, didn’t wait to show the state he was ready. Last Friday in the Titans 39-17 win over Beatrice, Hausmann ran over, around and through the Orangemen to the tune of 228 yards on 20 carries and two touchdowns.

The rock solid 6-0, 200 pound Hausmann scored on runs of 29 and 11 yards, but had several other impressive carries that would make college scouts drool. He had runs of 22, 31, 20, and 14 yards during the game and punished defenders along the way on every run, it seemed.

The 14 yard blast was a sight to behold as Ashton ended up breaking 3 tackles, then dragging three more defenders down to the one yard line. On a 22 yard sprint around the Norris right side, 4 Beatrice defenders had shot before someone finally pushed Hausmann out of bounds.

Here’s a young junior that can squat 405 pounds, has blazing speed, just loves to run over people and is a beast on defense hits like a runaway freight train. ‘Bout as good as it gets, eh?

*Tyler Chadwick, James Burks, Nick Henrich -Omaha Burke - Just another day at the office for the masterful Bulldog quarterback, Tyler Chadwick. In Burke’s 49-28 thumping of Lincoln SE, Chadwick hit 11 of 17 passes for 236 yards and 4 TDs. Nebraska football commit Xavier Watts caught 3 of Tyler’s tosses for 99 yards, with a 61 yard TD among them. Trevon Perk had a 24 yard scoring catch, and junior Tyreece Wynne had only one reception, but it was good enough for a 47 yard touchdown.

The electrifying James Burks rushed for 119 yards on 14 totes and hit paydirt on runs of 5, 1 and 39 yards.

Husker recruit Nick Henrich had 11 crunching tackles in the game, two were for losses, one being a QB sack. The Bulldog “D” recorded 8 tackles for losses in the game.

*Austin Endorf - North Bend Central - Talk about a Gunslinger, man! Endorf, a 6-2, 165 pound junior, ripped Johnson County Central’s pass defense to pieces in the Tigers 56-34 win Friday. Austin completed 31 of 47 passes for 497 yards and six TDs with no INTs. That’s good enough to lead the entire state in passing yards after Week One.

Endorf’s favorite target? John Emmanuel, who reeled in 10 receptions for 214 yards and a score. Emmanuel is already nearing his entire output for 2017 (24 catches/293 yards/3 TDs)

You may recall that Austin Endorf is no rookie to this passing thing. Last season, as as sophomore, he threw for 1,543 yards and 15 touchdowns (7 INTs) for a 2-7 North Bend squad. It is so good to see this program see some success on the gridiron too.

*Broc Douglass, Cole Evans, John Reilly, Sam Sims - Grand Island - This foursome was just a piece of an Islander Team effort that dominated Kearney 46-0 in the season opener. Douglass, a 6-0, 160 pound junior and son of highly skillful sports writer Terry Douglass, was all over the field for Grand Island last Friday. Broc not only caught a highlight reel 39 yard touchdown pass from Cole Evans (3 total receptions for 63 yards), but also made 2 stops on defense and returned 4 punts for 119 yards. One of the returns was a dazzling 70 yard skirt down the Islander sidelines that nearly went to the house.

Quarterback Cole Evans completed 8 of 11 passes for 115 yards and a pair of TDs, rushed 7 times for 30 yards, averaged 47.6 yards on 8 kick-offs, punted once for 38 yards and displayed great offensive leadership.

5-7, 150 pound senior John Reilly ran tough inside all night, gaining what seemed like a lot more than 58 grinding yards on 15 carries and 2 TDs.

And rough/tough Sam Sims seemed like he did so much more than his 4 tackles and 2 sacks. Slammin’ Sam is such a terror on special teams with his tackling and crunching downfield blocks.

This is a good football team who will find out how good they are this Friday at Lincoln High. Liking the way Jeff Tomlin’s troops were prepared for this season opener with Kearney.

*Baily Darnell - Auburn - D1 prospect started the 2018 season right where he left off before being suffering an injury a year ago. In a 35-0 win over Fairbury, the 6-1 190 pound Darnell was given the ball only 6 times, but the 2017 thousand yarder still gained 114 yards and managed to score on runs of 5 and 60 yards.

Jaguar junior QB Darrin Pokorny also completed 4 of 7 passes for 130 yards, two of those connecting for touchdowns. Senior John Brester caught one of those, a 36 yard scoring reception, while speedy Luke Rocheford hauled in a 54 yard touchdown pass and added another tally with a sparkling 70 yard kick return.

*Colten Storer - Arthur County - The 6-3, 180 pound senior did everything he could in the Wolves 71-55 Six-Man football loss to Hyannis. Storer completed 21 of 41 passes for 446 yards and 6 TDs, rushed 11 times for 114 yards, caught a 16 yard scoring pass, made 5 tackles defensively, and ran in a one point PAT conversion. All in all, Colten Storer amassed 576 total yards in the loss.

On the receiving end of Storer’s touchdown passes were Rayford Turner (4 catches-140 yards/3 TDs), sophomore Alex Worthing (4 receptions/110 yards/1 TD plus 93 rushing yards), and another sophomore, Colter McCashland had 6 catches for 110 yards and a touchdown.

Lauby and Moore will be of the most lethal one-two backfield punches in Class D-1, 8-Man football this season, friends.

Meanwhile, Bears QB Jack Wiebelhaus (5-10, 165, Senior) had a career night throwing the football. Wiebelhaus hit 17 of 27 passes for 367 yards and 6 TDs. His favorite target was senior Antione Curtis, who caught 8 passes for 239 yards and 3 TDs.

In his previous two seasons combined, Mister Wiebelhaus completed only 12 of 31 passes for 345 yards for 2 TDs and 5 INTs. Ya think Jack Wiebelhaus might be one happy Bryan Bear camper after last Friday night?

Two rushing TDs, 1 receiving score, and a Pick Six. Not a bad night’s work, and the cool thing about this entire Hunter Hain performance? The dude missed all of his junior season because of injuries and gained only 108 yards as a sophomore but is now back full speed ahead and producing big time.