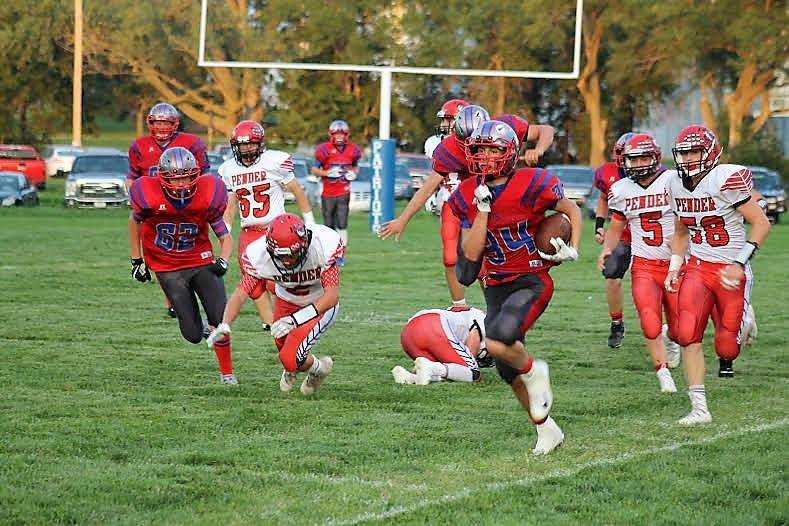 Clarkson/Leigh RB Tommy McEvoy (#34/red)is off on another TD jaunt. McEvoy is one of 8-Man football's Top 2018 Prospects. *(photo courtesy of Bob McEvoy)

Today we spotlight the 8-Man players around the state that made an immediate impact as freshman and now have set the stage to be sensational sophomores.

In so many instances in the 8-Man game, freshman are called upon to play due to lack of players out for football. By the time some of these 9th grade starters are seniors in high school, they are seasoned veterans and in many cases, help their teams advance deep into the playoffs and end of All-State football players.

The 8-Man game is one of the greatest forms of prep football in the country and Nebraska boasts more teams playing that 8-Man game than any other state in the US. So many small communities around this great state of ours define the toughness of their town based on how good their football team was during a given era, and because of that very reason, Friday Night Lights is about as good as it gets in those towns.

That is precisely why I love the 8-Man game to pieces.

Here are those 2017 freshman set to make some noise this Fall as spectacular sophomores.

The stars are aligned for Tommy McEvoy and you could see it a year ago. Dad, Bob McEvoy is one of the Patriot coaches, and a good one at that. Head Coach Jim Clarkson is a 19 year vet up at Clarkson/Leigh, and knows the game inside and out.

Young Tommy McEvoy played like an experienced player as a freshman in 2017. Made 1st Team All-District despite playing in only 5 games. A dislocated elbow and subsequent surgery ended his season far too early, but this young man is a baller.

He wears #34 in honor of “Sweetness” Walter Payton and certainly has Walter’s drive. On offense Tommy was all over the place, gaining 263 yards rushing with 4 TDs, plus hauling in 15 passes for another 210 yards and 3 scores. He knows what to do when he gets the football too. Very good speed, outstanding vision, cuts well and just has a great flow when he runs. Tommy has my favorite long, 400 meter stride, is not afraid of contact…..and is a vicious blocker. A couple of McEvoy’s downfield blocks when his quarterback took off on keeper plays, just rattled this guy’s bones. Oh, those football coaching bloodlines.

On defense McEvoy is a safety that can really cover the pass routes, defend those enemy passes and is one of those players that has an inner radar for where the ball is located when he defends the run or the pass. His 45 tackles, an INT and a recovered fumble in just 5 games, are proof of that.

Could be a good year for the guys in the cool red unis up there in God’s country. Clarkson-Leigh has a very good shot at making the playoffs in 2018 and one of the reasons is Tommy McEvoy. Another guy I just might say a few for late at night so he might stay healthy this Fall. It’s Okay, I do that sometimes, you know.

Think about this one. Coaching Legend Doug Goltz stated that Del Casteel may be one of the best Freshman he’s coached in his 32 years at Sacred Heart. That statement right there would be enough for anyone who knows the game, to take that to the bank.

Coach Goltz said nobody works harder, nobody plays harder than Casteel. That’s enough to spook all of Class D-2 for sure.

What blows my mind is, despite playing LB for that Sacred Heart defense, Casteel will often set up in a down, lineman position, fight off a block, and get to the ball carrier in one quick burst. And you can tell this kid is pure football stock because he loves to play on special teams just to blow up ball carriers on kickoff and punt returns.

On offense this Fall, Casteel will take over the “featured RB” duties for the Irish. His QB will be All-Stater Drew Bippes, who can run and throw the football. That’s double-trouble for Class D-2.

Del Casteel runs hard, packs a painful punch at the point of contact and has terrific hands as a receiver out of the backfield.

You can figure the rest of this story out. Two-year All-State material for sure, maybe a three timer.

Arcadia/Loup City drops from C-2 to the 8-Man One ranks after nearly making it to Lincoln a year ago. Clayton Detlefs started on defense as a Freshman for that outstanding Rebel squad last season, and that was one of the most vicious hitting defenses I saw all last year, in any class.

The hard charging Detlefs logged 39 tackles last season, 5 for losses, had a sack and intercepted a pass against powerhouse Central City. In Arcadia/Loup City’s 21-12 Quarterfinal loss to Lincoln Lutheran, Clayton Detlefs had 10 tackles. That tells you something about this young man. Watch him excel in 2018.

Cargill is Jackson McIntyre’s road grader on offense at Central Valley, and the run stopper on defense. Big dude for a 9th grader. Mom just orders a quarter of beef a week for Trevor’s night time meals. Cargill had 44 stops on defense in 2017 and did all the kickoffs for the Cougars, averaging 42 yards a boot. Every 8-Man football team needs a Trevor Cargill to be a success……...and the kid is still growing.

Another terrific multi-sport athlete, young Kaden Glynn played some QB in games that starting quarterback Cole Fossenbarger had things well in control for Johnson-Brock. Matter of fact, Glynn fired a couple of TD passes. He also caught 12 passes for 209 yards/2 TDs, but Kaden’s strong position was at outside linebacker. Played in all 11 games, made 47 tackles and more importantly, picked off five passes. On the basketball floor, Glynn was one of Class D’s deadliest three point shooters, scoring 461 points for Johnson-Brock’s 24-6 3rd Place team. Already a standout two-sport athlete.

Monster pass receiver for the 3-6 Broncos with 503 receiving yards/4 TDs in just 8 games a year ago. Rushed for 235 more yards and was a fantastic, hard hitting LB with 80 tackles. 37 of those babies were solos to go long with his 2 INTs and 2 fumbles recovered.

Stuart is loaded this season with 7 starters returning on both sides of the ball, plus, Wade Paxton has his quarterback, Ethan Sattler (1,575 yards/22 TDs) back this Fall to hook up with him for more touchdowns passes. Keep a watchful eye on Wade Paxton, he’s just getting started folks.

Nobody plays for Sandhills-Thedford that isn’t tough…..nobody, and Reed McFadden is one of those tough guys. On offense, McFadden dished out more pancakes than The Cowpoke down there on Main Street-Thedford did on a Sunday morning. Twenty One to be exact. On defense, McFadden made a monster 80 tackles for the Knights and 46 were pain-inflicting solo stops. Sandhills-Thedford’s line was hit by injuries a year ago, but Reed McFadden was a mainstay the entire way. Future All-State prospect.

Anyone with he last name of Turek is bound to be good for Hemingford. Brian Turek played a lot of defense for 7-3 Hemingford last season, logging 57 tackles, 28 of which were solos. Young Turek will be battling for the starting QB job this Fall, but will fill in at an offensive skill position regardless of that outcome.

Christian will count on Elijah Boersen a ton this season because of lack of depth.. and because he was a pretty salty football player last season as a freshman. Boersen ran for 348 yards and 2 TDs, the bulk of that coming in a monster 239 yards on 15 carries/2 TD night against High Plains. Elijah is also a dangerous receiver out of the backfield, snagging 12 receptions for 234 yards and 3 scores in 2017.

The lad had a very impressive night receiving in a tough 36-28 loss to a good Henderson Heartland squad. Boersen caught 5 balls for 131 yards and 3 of the Eagles 4 TDs that night.

On defense, the 2017 freshman made 48 tackles, 33 coming on assists, as he roamed the Eagles secondary. Elijah also did the kickoffs for Nebraska Christian and was one of 8-Man football’s finest Punters, averaging 39 and a half yards boot.

All you need to know is this. #1) Cambridge produces top notch football teams year in and year out….and... #2) Ethan Sides played only six games last season and as a freshman, and still made 24 solo tackles, 31 assisted stops and 5 tackles for losses. This year new head coach Rodney Yates (St. Francis, Kansas/37-7 record) says Ethan Sides will play in the backfield. Yeah….stay tuned. Another future All-State player.