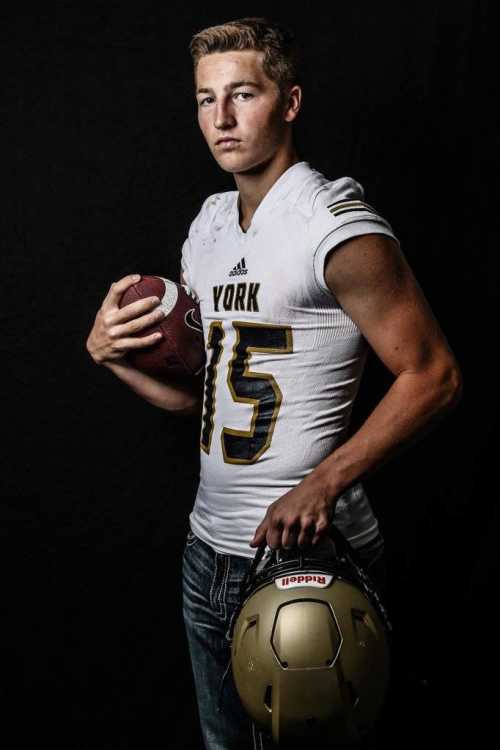 n my last blog, I concluded things with a QB/OL/WR trio from Centennial high school. The pass/catch combination of Wyatt Ehlers and Jackson Hirschfeld can flat out light up the scoreboard with the capable help of super lineman, Caleb Cast.

We will lead things off with one the finest two-sport athletes in the state, tell you about a pass/catch duo that will get your attention and introduce you to a junior LB that eats nails for breakfast and chases ‘em with hot sauce.

Brady Danielson is, without a doubt, one of the absolute finest two-sports athletes in the state, regardless of class. Great family athletic tradition, consistent big play threat both on the football field and on the hardwoods, and a player you want to have the ball when crunch time rolls around. Last year’s State Basketball Tournament proved that last point.

Brady seemed to come up big last year on the gridiron whenever the Dukes needed a 1st down, touchdown, or a stop on the defensive side of the ball. The junior sensation set a Single Season record for Receiving Yards in 2017 when he accumulated a monster 846 yards with 12 TDs. Danielson caught 37 passes to hit that 846 yard mark, an average of 22.9 yards a grab. How many wide receivers in this state come to mind in that average nearly 23 yards everytime they catch pass? And…..every 3rd catch went for a touchdown.

Number 15 is just not a great one on one matchup for any defender. Danielson’s, smooth, subtle moves get him open nearly every time he runs a pass route, and one particular move, the stop/go dandy against Seward, may have topped them all.

When Brady Danielson was roaming that York defensive secondary, opposing teams simply did not get much done if he was involved in the play. I honestly think that is a Danielson family thing. I recall Coach Snodgrass telling me very late in the football season, that Brady’s older brother Ty Danielson had not only not allowed a touchdown from his DB position, but had not been beaten on a pass route…...at all, not one.

Brady pirated 7 enemy passes in 2017, two of those coming in a road game against Seward. On one of those INTs, if the Bluejay receiver hadn’t made the tackle after Brady’s pick, Danielson may have gone the length of the Concordia University football field for a Pick 6.

How many adjectives are there to describe this young man? Clutch, Money, BigTime, Go-To Man, Old Reliable…….Brady is s very special athlete and an even better human being.

York will be favored to bag another Class B football crown this time around and players like Brady Danielson prepare for this long before Monday, August 6th rolls around. A summer on the basketball courts, football practice fields and weight room, plus a job.

So take a second look at the photo above. That is what a champion looks like.

You know what? These two guys are scary, real scary when they hook up for some pass/catch fun for the Thunderbolts, and what is really odd? Lincoln Pius X is a run first ball team. Always has been. Grind it out baby. Right, Coach Hansen?

Well, 6-2, 195 pound QB Austin Jablonski and 5-10, 180 pound WR Joe Dworak showed the Class A football world that the Bolts could air it out when they needed to get some yards in a hurry.

Jablonski didn’t put it up often, but when he did, it was pretty. Pretty scary that is.. The lanky Thunderbolt field general completed 50 of 87 throws a year ago for 773 yards and 9 TDs. Yes, he completed it to the opposing team 5 times, but that can be fixed, and two of those picks came in that 43-33 playoff loss to Omaha Westside anyway when the Bolts were in panic mode..

You do not want Austin Jablonski to run the ball either. Austin ripped off 669 yards and another 7 touchdowns running the football…..and the dude is slick. Jablonski has a sneaky style of running the QB option play. He takes the snap from center and casually slides down the line of scrimmage, convincing the defense he is going to pitch the ball. Then….Bang!...Jablonski plants and cuts up field for a large gain. And, Austin is also an awesome open field runner with shifty moves.

And how about this Joe Dworak? I can say right now that Joe Dworak has some of the slickest, craziest down field pass pattern moves I have seen in a long time, regardless of class...and remember he does plays in Class A. As far as pure, instinctive wide receiver moves, Dworak is the best in the state.

It certainly appears that Joe Dworak and Austin Jablonski work together in the off season. Some of the pass/catch hook-ups are astonishing. Dworak has glue-like hands and can make you look just plain silly after he catches the ball too.

There were times last season when Pius lured defenses into a tight, run-stop formation. That left Joe Dworak all alone, streaking down the field. Huh? Can’t be. Oh yeah. Happened more than once.

In 2017, Joe Dworak caught 41 passes for 792 yards and 11 TDs. That’’s 19.3 yards a catch and a touchdown every 4th reception. You think this young man isn’t dangerous. Dress Dworak out in a Bellevue West uniform and the kid has 1,200 receiving yards if they choose to throw the ball to him. Honestly, my head is still spinning from watching Dworak live and on film.

Joe is also a good pass defender on defense and is a nice run stopper as well. Last season, Dworak was in on 41 tackles and made a huge interception in the Bolts 21-14 loss to Grand Island. If Coach Ryan Kearney chooses to put Joe Dworak back to receive kickoffs, I can almost guarantee you he will bring one back to the house.

A final word on Austin Jablonski, Joe Dworak and Lincoln Pius X. The Thunderbolts are generally not a good matchup for anyone in Class A. That “They’re just a Class B program trying to cut in in Class A” stuff is a bunch of junk. Ask defending Class A Champion Omaha North how much fun it was to go to the Thunderbolts Vince Aldrich Field and get their rears tanned 28-14 two week before playoffs. Probably woke Omaha North up when you think about it.

Anyway, keep an eye on The Lightning and the Strike duo from Pius in 2018 and get out to see this pair if the chance arises. Well worth the price of admission.

Last season as a sophomore, Brett made an incredible 138 tackles for a 7-5 Pierce team. 11 of those were behind the line of scrimmage and 4 were sacks. Two of those four QB sacks came on Boone Central/NG two-time All-Stater, Dylan Gentrup and certainly weren’t in the sweet, little kiss category Tinker also ran down and wrapped up the likes of Norfolk Catholic three time 1000 yard rusher Dylan Kautz, broke several Aquinas tackles on two separate occasions and pulled off the same tackle shedding deal against Norfolk Catholic.

Tinker even broke through and blocked a Payton Love field goal attempt in that Norfolk Catholic game. For good measure, the amazing sophomore made an INT and recovered 3 fumbles in 2017.

On offense, Brett Tinker amassed 711 yards on just 85 touches (8.4/carry) and scored 4 TDs and made dozens of run springing blocks for 1,400 yard rusher Collin Tinker. Running with a low center of gravity and great pad level, Tinker is a tackle shedding machine, churning for yards after contact and is faster than you can imagine in the open field.

Tell you what, if with Brett Tinker and Dalton Freeman roaming that Pierce “D”, that alone is bad news for opponents. And you know who the Bluejays open the 2018 football season with? Norfolk Catholic…..in Pierce.

I’ll be there at noon.

All three of these young men are only Juniors, by the way. Adams Central brings back most of their offensive and defensive lines, so how good will these Patriots be in 2018?

First, there is 6-3, 190 pound Quarterback Evan Johnson. Try this on for size. Johnson was a freshman in 2016 with zero experience. Starting quarterback Dawson Eckhardt lasts one series before breaking his collarbone in the opener against powerhouse Kearney Catholic.

Johnson enters the game, never blinks an eye, and completes 12 of 22 passes for 212 yards and 2 TDs. Yes, Adams Central lost 53-21, but Evan Johnson has started every single game since that night and played with confidence and leadership.

Johnson finished his Freshman year completing 51% of his 224 aerials for 1,503 yards and 11 touchdowns (8 INTs). This was in 8 games due to the fact Evan’s season ended with an injury in that 8th game loss to Columbus Lakeview. Adams Central ended up with a 3-6 record that season.

Last year, Evan Johnson completed 53% of his 177 passes for 1,589 yards, 17 touchdowns with only 4 INTs. The Patriots improved their record to 4-5, but the C-1 playoffs eluded them once again.

Entering this 2018 campaign, Johnson is already a seasoned veteran with 17 games under his belt. 3,092 yards with 28 TDs isn’t too shabby either for a youngster entering his junior season in the rugged Class C-1 circles.

The second piece to this Terrific Trio is RB Gabe Conant. The 5-9, 165 pound runner scooted for 1,052 yards and 6 touchdowns a year go. The dual-threat Conant also caught 12 passes for 166 yards but four of those went for scores. And what makes this even more special is the fact Gabe was injured in the 4th game of the season, a 41-6 romp over Minden.

Prior to his injury in that Minden game, the elusive sophomore had already rambled for 262 yards and 3 TDs. The week before that, Conant had zipped for 211 big ones with a touchdown. The kid was on a serious roll when the injury occurred.

Anyway, Gabe Conant missed the next game after Minden, wasn’t at full speed for two games after that, but rebonded for 115 yard night against Lakeview, then exploded for 191 yards and 2 TDs in A/C’s 41-21 win over Scotus in the season finale.

And the third piece to this threesome...Leif Spady. Does that Spady name ring a bell? How about Cole Spady, who caught 82 passes for 1,342 yards and 18 TDs in just two years (2015/16) for Adams Central. Could the two-time All-Stater be any relation to Leif? It’s referred to as bloodlines, folks?

Last season, the 6-3, 175 pound Leif Spady caught 28 Evan Johnson aerials, good for 508 yards and 5 scores as a sophomore. And I can tell you right here and now, Leif Spady is of the best receivers I saw all last year.

Against GICC, Spady caught 6 passes for 161 yards and a score and was so wide open, so many times downfield during that game, Evan Johnson could have hit him 15 more times for 300 more yards. It was unbelievable. Spady looked like Cole Spady times 2 that night.

This kid has HANDS. Any pass near Leif Spady is a reception. The lad is that good. And the ability to get open….Good lord.

Okay. These three are just Juniors. Adams Central has a great football tradition. Shawn Mulligan is a good coach with a fine staff. The Patriots have not been in the playoffs since 2013…….that is about to change. Keep a close watch on this football team in 2018.