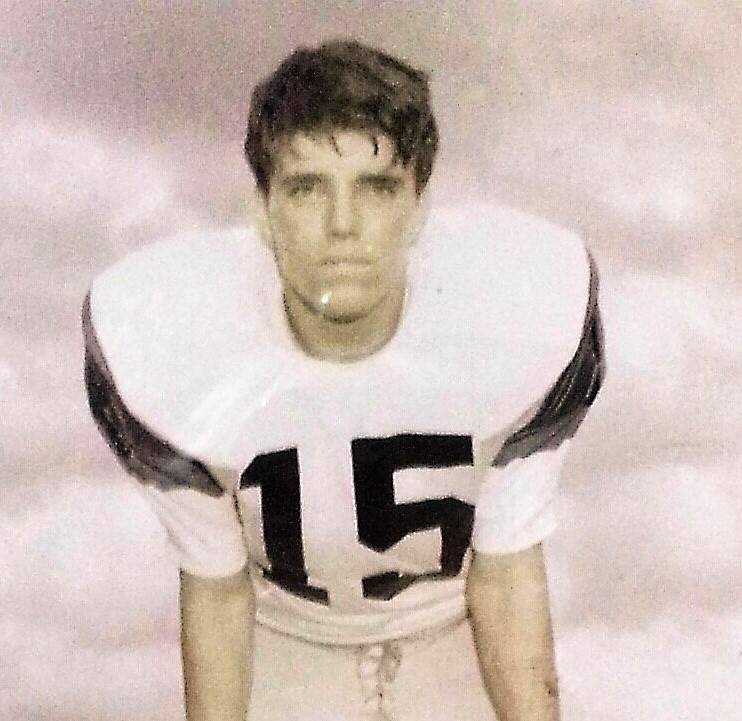 The image of a man who wishes he could turn the clock back to 1966 come next Monday morning.

Today we have a mixed bag of extraordinary Nebraska prep football talent. These are names you will be hearing and reading about in 2018 and something that rarely occurs...a salute to a trio of stars from one football team.

Good Lord! The guy had 21 tackles for losses last season despite playing in only eight games for the Thunderbirds. Powell was injured in a freak deal while playing on a kick-return team in Bell West’s crazy 73-62 loss to Omaha Westside. Sad.

Can you imagine what kind of vengeance Jalen Powell will have when Fall football practice begins next Monday? The man plays with a ton of fire as it is, which made him nearly impossible to block a year ago. Fifteen pounds of muscle have been added to Powell’s already sculptured frame this off-season, and now all we have to do is sit back and watch the fun as the 2018 season unfolds..

There were times in 2017 when the man assigned to block Jalen Powell never got the chance to do just that. Powell was so fast off the ball, so quick with his feet, he was past his blocker before the guy even raised up to see where #90 was located.

He’s already around you, dude.

When a DE makes 39 total tackles, despite being double-teamed part of the time, and still manages to have 21 stops behind the line of scrimmage, that defensive end must be special, very special.

And there were a few plays when Powell arrived in the backfield so rapidly, he nearly took the handoff before the running back had the opportunity to take the ball from the quarterback. And you know what transpired after that. Crunch!

Here is a lad that just loves the game, shows up to practice with an attitude every single day, and shines the brightest when the Friday Night Lights are fired up. You can trust me on this one, Jalen Powell is in line for a monster season in 2018.

I’m going to say a few before bedtime tonight so that this young man might enjoy good health all season long in 2018. I do that sometimes, you know. It’s only right.

McCormack was little bit of a sleeper going into the 2017 season…..not anymore. No, his stats will not jump off the sheet at you, but dig a little deeper and you will find a Division One football player. At least South Dakota State thinks so, and I have huge respect for those Jackrabbits up there in Brookings.

Caden McCormack made 43 stops from his outside LB position in 2017 and really displayed a “radar-like” sense of where the ball was located at all times. And his ability to fight off blockers was outstanding, his tackling form was good, but it was just that nose for the football thing impressed me.

I spoke earlier of digging deeper into what makes Caden McCormack a Division One prospect. How about…..4.53 forty, :11.32 hundred meters….now it gets good….35” vertical, 280 pound bench, 485 squat. Team those numbers up with his instincts for the football location and remarkable football IQ, and you have a potential D1 producer.

The Silverhawks had a nice football team a year ago. They went 6-3 during the regular season but ran into Bellevue West in the 1st round of the Class A playoffs (21-41 loss).

Here is another big plus about Lincoln SW’s Caden McCormack. The kid can flat out gain those yards on offense as a running back. Okay, only 231 yards a year ago, but Southwest distributed the ball throughout their entire backfield, and I can tell you from seeing McCormack live, that he can go for at least 700-800 yards if he gets the carries as a featured back.. A thousand yard season isn’t out of the question if Coach Sherman has an offensive line.

Keep a close eye on McCormack in 2018, especially on defense.

Renaissance man, baby. Plug Luke Reimers in at QB, RB, Flanker or wide receiver on offense or strong safety on defense and he will produce. That’s saying something for a guy who shines week in and week out for a 2-7 football team. He’s a Baller, my friends.

The North Star standout had offers from South Dakota, Buffalo, Northern Iowa and South Dakota State. Thirteen days ago, Luke Reimer committed to SDS to be a Jackrabbit, which was an intelligent choice. Dan Jackson, South Dakota State’s Cornerbacks Coach/Recruiting Coordinator, loves young men like Reimer, who will give 110 % every single practice, day in and day out.

Last season, Reimer rushed for 616 yards and 10 touchdowns for Lincoln North Star, caught at least a dozen passes, made 50 tackles on defense, intercepted a pass and returned punts and kickoffs. What made this lad so special in 2017 was his high IQ on the football field….at any position he played. A real natural.

Something maybe a handful of you didn’t know about Luke Reimer. The kid played 8-Man football his freshman and sophomore seasons for Ashland, Kansas, a town about 51 miles south of Dodge City, Kansas and only 16 miles from the northern border of Oklahoma.

A six foot one, 165 pound Luke Reimer labored for a 4-3 eight man football team his sophomore year in 2016, rushing for for 483 yards and 10 touchdowns. He also caught 10 passes for 316 yards/6 TDs and made 121 tackles on defense, made 3 interceptions and recovered two fumbles….all in 7 games.

Exactly one year later, the Kansas 8-Man kid was playing Class A 11-Man football in Nebraska, increasing his rushing yard numbers and getting Division One offers.

You can now add Reimer’s name to the list of players I have seen make the transition from 8-Man football to the rugged, 11-Man Class A game. However, nobody in my recent memory has accomplished what this youngster has pulled off….Truly Remarkable.

So, not only did Reimer have to make that big jump from 8-Man to the big boy, Class A ranks last season, but the kid had to move to the Quarterback position for Coach Mark Waller when North Star’s top two signal callers went down.

Luke took over the quarterbacking duties for one game on September 28th against Omaha Northwest. The result...a 35-21 win over the Huskies. Reimer completed 3 of 4 passes for 31 yards but...also rushed 21 times or 158 yards, scoring all 5 TDs from his Wildcat formation QB slot.

My take on Luke Reimers….The dude is fast, maybe 23 flat/200 meters fast, packs a punch at the point of contact, sheds tacklers, and is out of the chute in a heartbeat when he runs the football. Very good defensive cover man on passes, and plays defense with way above average football smarts.

I really, really love the way Luke Reimers plays the game of football. Stay tuned for 2018 and let’s hope he has some help.

Way overdue to talk about Wyatt, the most dangerous quarterback in Class C-2 the past two years. The heady field leader has twice earned All-State honors, leading the Broncos to a sparkling 21-2 record the last two seasons.

Ehlers has completed 53% of his 514 career passes for 3,941 yards, 42 touchdowns with 21 INTs. Yes, the interceptions may seem a bit high, but when you consider Wyatt ran for 503 yards/6 TDs and made 57 tackles on defense with 3 INTs and 2 recovered fumbles, one tends to forgive those ten picks in 2017. Plus, when you throw for 2,065 yards with 22 touchdowns and lead your team to a C-2 State Finals appearance, it eases those concerns even more.

Wyatt Ehlers does have a different type of delivery when he throws the football….almost no follow through with his passing arm. Many times, Ehlers will receive the ball in the “Gun”, take two short steps back, cock his arm and fire the football, finishing with that passing arm just a foot past his helmet.

The motion itself defies physics in a way. Experts tell you to follow through when hitting a baseball and follow through with your golf swing, but Wyatt has the passing numbers to dissolve any pending arguments before they even get started concerning those statements.

When you think about Ehlers’ arm motion as he launches the football, (with little follow through) one has to deduce the dude must to be able to easily curl a 50 lb weight with his right arm. Well anyway, different ball delivery or not, he gets the job done, Hercules right arm and all.

The trusty senior is also a feared runner when he decides to take off out of the pocket. Some of those runs are by design, but either way Wyatt Ehlers is usually going to get big chunks of yardage and punish some folks along the way. True Dual-Threat QB.

All Mr. Cast did a year ago for Centennial was log 115 painful tackles (54 solos). 20 were for losses, and 10 were sacks. In two seasons for the Broncos, Number 63 has recorded 174 total tackles.

On offense, Cast provided some nice openings for RB Gavin Avery (1,141 yards) and of course Wyatt Ehlers and his 503 yards as well.

Cast certainly has carried the tag as one of C-2’s finest lineman on both sides of the ball the past two seasons, and some of his head to head battles with Yutan’s All-State standout, Colton Feist, were absolute classics. The two banged heads four times the past 2 seasons by the way.

Oh, and did I mention that Caleb Cast is one of the top kickoff booters around? Big Caleb put his toe into 61 kickoffs, averaging 48.7 yards a kick. Seven were touchbacks. Kind of handy to have that kind of talent. Certainly erases the possibility of a long kick return doesn’t it?

Talk about a Renaissance man, jack-of-all, two-way football star! Jackson Hirschfeld is your Man. In 2017 alone, Hirschfeld caught 55 passes for 850 yards and 9 touchdowns. And did I mention he even threw a TD pass last year? You guessed it. One pass - one 36 yard touchdown strike…….to his QB Wyatt Ehlers. Pretty play.

When Centennial played defense, #3 was everywhere. Hirschfeld made 36 tackles (18 solos) and picked off 8 enemy passes. Yeah…..eight, and averaged 11 yards after each pick too.

Jackson’s finest games on offense came against Yutan last season. You’ve heard the phrase “big time players come up big time in big time games.” Hirschfeld did against Yutan in 2017. In the regular season meeting against the Chieftains, he had 6 receptions for 120 yards and two TDs…..Broncos won 28-25.

In the State Final 27-6 loss to the same Yutan squad, Jackson reeled in 8 passes for 143 yards and made 5 tackles.

This lad not only has amazing hands, but may also be the biggest nightmare to cover for any Class C-2 defender. Hirschfeld has smooth as silk moves on his pass routes with an uncanny knack of getting open most of the time.

Jackson also possesses great leaping ability and flat out performs some real magic after he pulls down one of Ehler’s passes. Outstanding open field runner as well.

Jackson uses that same athleticism, so evident on offense, on the defensive side of the ball too. Well rounded player for certain.

Jackson Hirschfeld is a certainly a player that could be a standout football athlete in Class B, especially at WR.

***And this footnote….Centennial returns 7 offensive starters and eight on defensive side, but must deal with Norfolk Catholic and Aquinas Catholic both dropping down to Class C-2 this Fall.

As I always say….stay tuned.