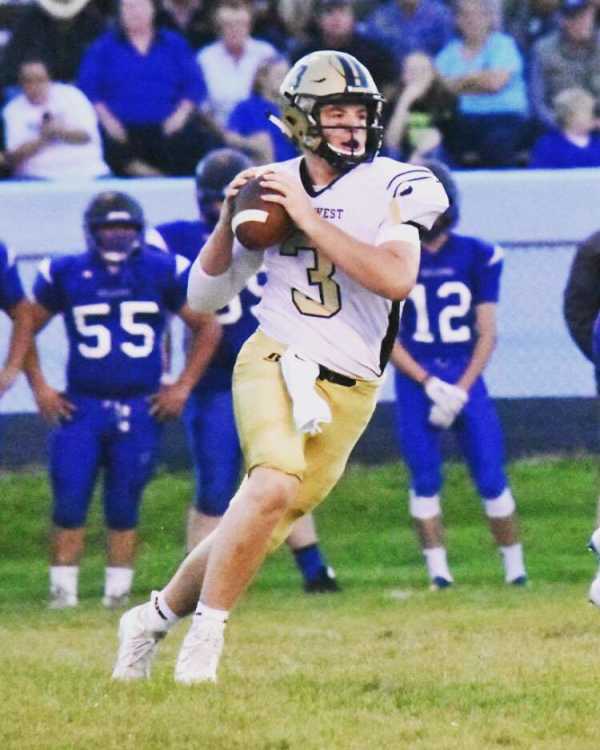 It’s high time we salute our first quartet of Nebraska high school Premer Quarterbacks set to pull the trigger in 2018. We fire up the spotlights to feature a pair of top notch Class A senior sharpshooters, a Class B record holder, and a quarterback whose team drops down to the C-1 ranks for the first time in history.

No time to waste here, raise that curtain Ari.

Man, has this guy ever breathed life into the football program at Lincoln High. Cedric Case did not even start the entire 2016 season as a sophomore, yet he led the Links to their first playoff appearance in 16 years.

Not only that, but under his leadership at QB, Case has piloted Lincoln High to 13 wins the past two years. That equals the number of wins that program has had the past 5 years combined.

Last season, the mobile junior completed 69% of his 292 passes for 3,249 yards, 35 TDs and only 4 INTs, while leading the Links to an 8-1 record. That elevated Cedric’s two year career passing total to 5,129 yards, 54 touchdowns with only 9 INTs and a lofty 68% completion percentage.

Stop and think about that for a moment. 200 completions - 35 TDs. That’s a touchdown every 5.7 passes. Cedric Case a Big Play guy? Oh yeah.

Cedric Case has shown improvement between his sophomore and junior seasons and if the Links can develop another receiver or two to compensate the loss of Zion Perry to graduation, his numbers could be scary in 2018.

This kid has a rifle arm with remarkable wrist strength and the ability, not only to pull the trigger in a hurry, but to scramble in the pocket, throw against his body and execute Houdini-like ball fakes. Case is also a wizard spotting secondary receivers anywhere in the pass pattern.

I think Cedric is one of finest in the state at throwing the ball to a predetermined spot on the field with razor sharp precision and timing. He is one of those guys that can fire the ball through a car wash and have it come out dry.

He did have decent pass protection a year ago, but still had to scramble when that blocking broke down. But….I saw him play twice last season and witnessed only two sacks, so the line must not have been doing too bad a job. And I do realize some of that scrambling was simply play called rollout passes.

Cedric Case is the returning Super-State QB, so expect big numbers from this kid again this Fall. Very exciting player to watch and one of the reasons is his ability to improvise. Case will have Lincoln High right in the Class A title mix this Fall.

Dude reminds me of Fran Tarkington back in the Minnesota Vikings heyday.

Tyler Chadwick has been the model of consistency the past two season for the Bulldogs. The Omaha Burke field general has thrown for average of 2,100 yards the past two seasons and fired the exact same 25 TDs and 7 INTs both his sophomore and junior campaigns.

Last season, Chadwick had Burke to within ONE point of the Class A title game before the ‘Dogs succumbed to eventual state champion Omaha North, 29-28. In fact, Tyler had the Bulldogs up 28-14 in the 4th quarter before North sent big Zander Gray over the goal line in the waning seconds of the game to clinch the 29-28 win.

Well, Tyler Chadwick is back in 2018 for his senior season at Omaha Burke and so are Division One prospects Nick Henrichs, Chris Hickman, and Xavier Watts, and many state sports scribes will dub the Bulldogs Class A’s number one team in the 2018 pre-season ratings. This senior football class is the one Burke as been waiting for.

Under Tyler Chadwick, Omaha Burke has gone 17-6 the past two years. The youngster is cool under pressure and really does not have to run the football with James Burks in the backfield. But, opposing defenses cannot sit back and relax, thinking Chadwick will not run.. Unlike Cedric Case, Tyler Chadwick can run the pigskin.

Early in the season, despite hitting 30 of 41 passes for 664 yards and 10 TDs the first three games, Chadwick ran the ball 5 times for 58 yards in Burke’s game two 35-17 win over Creighton Prep.

Opposing teams may have forgotten about this until Tyler rushed 10 times for 64 yards in Burke’s 43-37 quarterfinal win over Millard West. He added 70 yards on only 6 carries and a TD in that semifinal loss to Omaha North, so the dude can run.

Tyler Chadwick seems to favor a “4 step drop-pull the trigger and throw” game over anything else. Make no mistake about it, Chadwick, can and will scramble (see above). He can also throw the football 40 yards in the air standing in that pocket, or on the run. And that’s with regularity.

Above all, this young man has tremendous leadership skills and the ability to take Omaha Burke one more step in 2018. Stay tuned.

Northwest went from one Class B record setting quarterback in Christian Ellsworth to another in Carter Terry. The senior-to-be has already set two Class B passing records and tied another in just two years as a starter.

Last year, the strong throwing Viking junior completed 60% of his 289 passes for a Class B single season record 2,724 yards and another Class B single season record 33 touchdowns. In just two seasons (plus 18 freshman yards), Terry has rifled for 5,030 career passing yards, 57 TDs and 26 INTs. In just one season, the Northwest tough guy has improved his touchdown to INT rate dramatically.

Carter Terry, stepping into Christian Ellsworth’s shoes (not an easy task), threw 23 TD strikes, but suffered 13 picks as an learn-as-you-go sophomore. Six of those interceptions came at the hands of York, Aurora and McCook. Forgiven, Carter.

Last season in 2017, Terry not only fired 10 more touchdown passes, but cut his INTs down by one (13 to 12). With 50 years of watching high school football under my belt, I call this terrific progress. Nice job, man.

Carter Terry is a shotgun formation QB that sets up about 5 to 6 yards deep in the pocket. He likes to take a 3 step drop, occasionally 4, then pull the trigger. The man has legs, he can scramble and throw on the run. Terry is capable of airing it out 50 yards as he did against Columbus…..I was right there and gasped. Cartter Terry can also run, has decent speed and will punish a defender at the end…..and has.

This kid is a very passionate player who lives the game. No reason to believe he won’t crush the Class B career passing record if he stays healthy, and the dude is tough enough to avoid injury unless it’s a freak deal.

Northwest could be rated as high as #6 or even #5 in the Class B pre-season ratings. One concern that Carter Terry will have in 2018 is that 2,542 of his 2,775 passing yards have disappeared because of graduation. Riley Schliep and Brady Glause accounted for a whopping 2,000 of those yards. Not an easy task replacing those yards, but on the other hand, maybe the Northwest JV team had some top notch receivers. We’ll see.

All things aside, this should be a year to remember for Carter Terry. Smart player, accurate, rifle arm, and physically tough-as-nails football player.

Carry on the tradition, man and keep that scrap book accurate Mom.

Okay, most prep sports fans know about Baylor Scheierman the basketball player, but all of us found out last Fall that this guy could play football. Slender dude, but mobile as they come. A year ago, Scheierman was 6-2 and a buck 55. Sender wasn’t the word. Skinny fit the bill.

And the major question we all had…..is he tough enough to take the punishment? Didn’t have to worry about thanks to the Aurora “O” Line. Literally, Nobody breathed on this kid until the Northwest game late in the season. And I mean nobody. You just did not sack Baylor Scheierman. I recall Northwest sacked him 3 times, but Scheierman got up for more.

In his one and only season as a starting quarterback for Coach Peterson, Baylor scorched the airlanes for the Huskies. He aired it out an average of 33 times a night, and ended up completing 197 of 335 aerials for 2,424 yards, 28 touchdowns with 11 interceptions in 2017. And his uniform was the cleanest on the field after every Aurora contest with lofty stats to boot.

He led the Huskies to a 5-5 record and a playoff appearance last year following a season with huge graduation losses.

Well, this season Aurora drops to Class C-1 and not only does a 4 inch taller Baylor Scheierman return, but also back is his 1000 yard receiver, the amazing Cade Reichardt. Aurora just about has to be the pre-season favorite in Class C-1, don’t they?

Here is Scheierman’s deal. He sets up in the Shotgun, once in a while the Pistol, about 5 yards deep. The lad is very poised and extremely confident back here. Once he takes the snap it’s like Matt Masker of Kearney Catholic…...ball hits his hands and no later than 3 seconds it’s gone. Short passes across the middle, flares out of the backfield, but that ball is out of Baylor’s hand in a heartbeat and those short passes just kill and frustrate your defense. Reminds of Florida State years back.

Even the long pass routes take very little time to develop. Scheierman is that good, that quick, that crisp. He was not forced to scramble much during the season, but when he did, the kid usually avoided trouble and threw well on the run.

In the later games, against teams like York and Omaha Skutt, Scheierman made some hasty decisions which led to the southpaw’s interceptions, but the guy will not see the defenses in Class C-1 like he saw in Class B a year ago.

If Aurora can come up with another nice offensive line and get their usual 1000 yard RB in that mix, Baylor Scheierman and Kyle Reichardt are going to have some serious fun on Friday nights in 2018.

Do not underestimate this young man’s capabilities. Baylor Scheierman is the same baller on the gridiron as he is on the hardwoods.