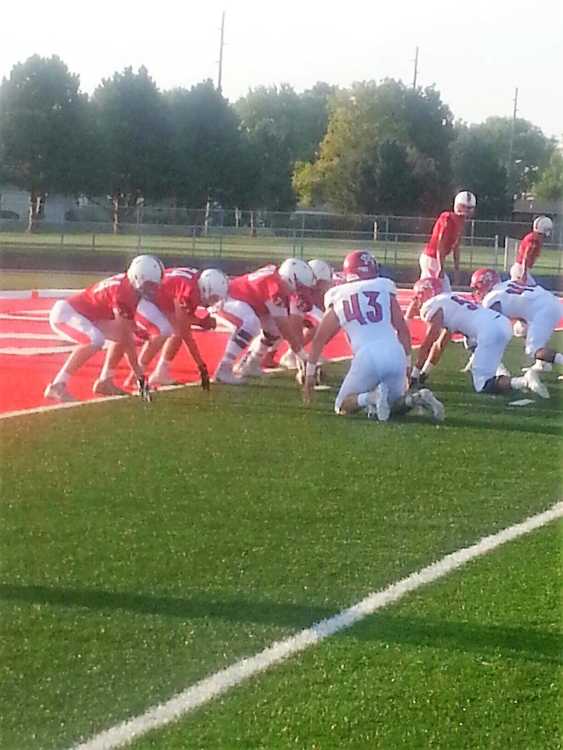 Pretty elite group of players year in and year out that fall into this category, especially those who were underclassmen. Catching a thousand yards worth of passes is a tough assignment for any high school receiver. And, of course, you must must also have a quarterback that falls into the “gunslinger” category to even think about being one of these 1000 yard receiver guys.

This Fall there are two returnees in the 8-Man ranks and a pair that play 11-Man football that are back for another season. There is one Junior in each class, so that means a couple of talented young sophomores had to haul in a ton of long passes in 2017.

Super Coach Michael Huffman has a jewel in Zavier Betts. As a sophomore, Betts caught 57 aerials, good for 1,035 yards, 15 TDs and a Super-State selection. His 18.2 yards per catch, among other things, caught the eye of several Division One schools. So much so that Nebraska, Iowa, Purdue, Minnesota and Iowa State have already offered…...and we’re just getting started in that department in my opinion.

Man, did I see flashes of all this when Zavier was a freshman. The smooth-as-silk Betts caught passes in seven games in his freshman year. There were 20 receptions for 254 yards and 2 scores in fact. Outstanding for a freshman a the Class A level where the speed of the game is played at a frenetic pace, especially with Bellevue West’s “basketball on grass” offense.

By the way, it was that Lincoln High game in 2016 that gave me the heads up on Zavier Betts when he caught 6 passes.

Anyway, I really like this young man. Zavier Betts appears to be 6-5 or 6-6 on the football field, especially in the white uniforms. And man is he is a pure nightmare matchup for defenses because of his ability to explode off the line of scrimmage and get open so quickly.

If there is a football anywhere near Betts, he’s gonna catch it. And the young man plays with such energy, such enthusiasm, and a genuine love for the game. What a gift that is for any football team at any level. And it rubs off on teammates, man….big time.

I realize Bellevue West’s gifted QB Jo Dolincheck has graduated. You just do not replace a man like Joe quickly, but Coach Huffman thinks either Jacob Coldanghise or basketball sensation Chucky Hepburn can be capable replacements and get the ball to Zavier Betts. Good enough for me. And the other good news here?

We have two more seasons to watch Mr. Betts perfect his skills at Bell West.

Stud….Pure Athlete. Those are just a couple of terms floating around describing this young man. Hahn was an All-State selection in both football and basketball a year ago and is just halfway through his varsity career at Johnson-Brock.

Last season, Ty Hahn caught 59 passes for 1,147 yards and 24 touchdowns for a Johnson-Brock team that made the Class D-2 playoffs despite sporting a 4-4 record. The Eagles won two games in the postseason before dropping a 54-42 decision to Howells-Dodge in the quarterfinals, despite leading 28-18 at halftime.

Ty Hahn just looks like the real deal. Long legs, big strides, great hands, fabulous football smarts, great vision and a very patient runner…...especially on punt and kick returns where he has already taken two of those babies to the house.

As we said before, in order to be a 1000 yard receiver, you must have a top notch QB pulling the trigger. It helps to consistently be on the same page and Ty will have his favorite gunslinger returning at quarterback for the 2018 season in Cole Fossenbarger (2,305 yards, 33 TDs, 58% accuracy).

Hahn probably could have sniffed All-State status on defense at the cornerback position last season too. The youngster made 119 tackles a year ago, pirated 5 passes (one being a Pick 6) and really had a nose for the ball.

Ty Hahn could flourish at the 11-Man level and possibly in a higher class IMO. Only room for improvement I can see is being more physical after catching the football, but his long legs are a great target for form tacklers at the 8-Man level…….and there are far more at this level of football than you think. “Wrap those legs together, slip down to the ankles and bring those babies together. Just like roping calf at the rodeo.”

All I needed to see from this kid was his performance on opening night 2017. I know, Aurora was dropped by McCook 38-8, but Cade Reichardt put on a clinic that night on Pass Receiving 101. I swear the kid caught 20 passes that night. Well, it wasn’t 20, but it came close.

Reichardt hauled in 16 Baylor Scheierman aerials for 155 yards and the Huskies only tally of the game. It was a sight to behold. Hauling in those passes with double and sometimes triple coverage. Amazing game.

The mobile Reichardt went on to catch 74 Scheierman passes for a whopping 1,043 yards and 14 touchdowns in 9 games. And when Cade wasn’t catching passes, he still drew enough attention to open up the run game for extraordinary Cal Narber.

Now, Cade Reichardt plays for a QB that gets rid of the football in a hurry. Baylor Scheierman drops back three of 4 steps and lets it fly. And the perfect fit for this style of offense is Mr. Reichardt.

One of Cade’s attributes are his great hands, but even more valuable is what he does after he catches the football. Many of Reichardt’s receptions come behind the line of scrimmage. That means #5 has to be as talented as a 1000 yard running back after he receives the pigskin. And he performs some real magic with his ability to find creases and avoid tackles with his slippery, sliding style of running. And yards after contact? Oh yeah.

Fasten your seat belts tight for the Aurora football ride in 2018, folks. Not only does Baylor Scheierman return at QB, but the Huskies drop down to Class C-1 for the first time in history. How can you not be tempted to pick this team pre-season #1 and expect record numbers from Cade Reichardt?

Stay tuned in for the journey.

*Andrew Wendland - Crawford - 5-9, 160, Senior (We now am informed that Andrew has transferred to Hot Springs, SD for his senior season)

The Rams Rambler teamed up with Quarterback Blaine Flack for some gaudy pass/catch totals in 2017. Flack threw for 2,236 yards and 31 TDs a year ago and Andrew Wendland caught nearly half of his completions, good for 1,067 yards and 18 of those 31 touchdown passes.

Andrew Wendland does not possess sprinter speed, does not have a particularly impressive vertical leap, doesn’t bench of bunch of pounds in the weight room, but has has a couple of assets that have carried wide receivers to state record nights…..great hands and the ability to get open.

This kid set a state record for receiving yards in an 86-46 loss to Mullen last season. During that four hour marathon, Wendland hauled in 17 passes for 365 yards and three TDs. QB Blaine Flack incidentally completed 32 of 62 throws for 516 yards in the game.

Wendland does have good football speed and comes to game with an attitude and plays with one. He also plays with a “cover me if you can” mindset and consistently pulls it off. The dude catches anything close to his reach and racks up yards after the catch, and even more yards after contact. Andrew is a fine defensive player as well and is a reliable place kicker, nailing 11 of 16 in 2017.

One worry for the talented number 25 this fall will be finding a replacement for Blaine Flack. Stay tuned on that issue, but that fact remains Andrew Wendland is an All-State receiver who is very difficult to cover.