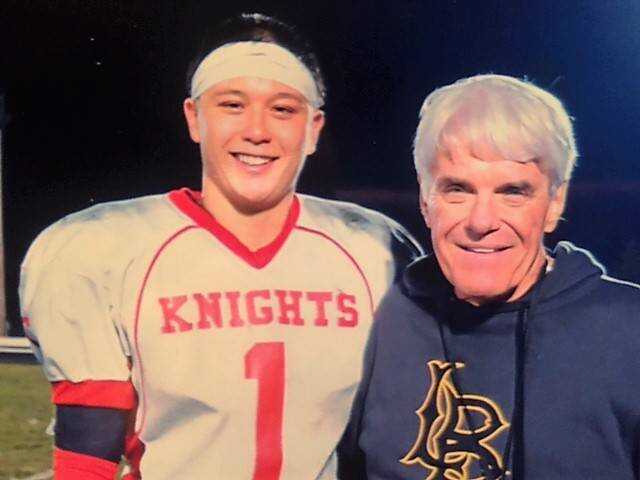 I now a present a little deeper look at some of the top high school backs who will be making some noise in 2018. Once again, Class A has some terrific talent at the skill positions and more importantly, in the trenches to pave the way for these talented runners. Wait a minute, can’t we consider Lineman skill players too?

And now to introduce the first quartet of running backs. Spotlights, please.

There is not a football or track fan in Nebraska that isn’t familiar this young man. Already a three time 1000 yard rusher, Kautz, considered the fastest prep athlete in the state, needs only 157 yards to eclipse the coveted 5,000 yard career rushing mark.

Dylan Kautz already has 36 games under his belt entering his senior season for Norfolk Catholic and has played in two Class C-1 championship games thus far, including Catholic’s 35-0 win over Boone Central/Newman a year ago.

He can also become only the 5th player in history to record four 1000 yard rushing seasons if he can log one more 1000 yard campaign this Fall.

The phenomenal Kautz, who has accumulated 6 State Track sprint titles in three years (100/200), has been electronically timed at :10.53 in the hundred,:4.38 in the forty yard dash, and has really increased his strength and power over the past couple of summers.

Dylan has bench pressed 290 pounds and squatted 340 in an effort to become a stronger force up the middle for those tougher yards. Kautz has also sharpened his cutting abilities and vision skills, making his combination of sizzling speed and elusiveness a deadlier lethal weapon on the gridiron in 2018.

This young man has gone from a being Freshman straight line, speed runner to a no-nonsense, nose-for-the goal line back. Kautz never, ever wastes a move and rarely displays the highlight reel flash many high school and college RBs crave. The lad simply looks for the shortest, straightest line to the end zone and runs like a gale force wind…….a coach’s dream.

Another asset Dylan Kautz possesses at the high school level, is the fact he knows his speed capabilities. Only once in a Nebraska blue moon have I ever seen Kautz cut back on a sideline run. He has the confidence that his superior speed will enable him to outrun a defender despite the angle the player has on him.

Very intelligent football player who will turn even more heads this Fall. This kid still reminds me of Danny Woodhead.

The “Dancing Bear” is the label I gave this youngster the night I saw him play his first game as a sophomore. After watching over 50 years of football in Nebraska, I just assume a 225 pound RB is not going to break any speed records or pull off any Barry Sanders moves.

But it was three feet in front of me at Buell Field in Millard that night in 2016 that I saw Gray tightrope the sidelines, sidestep a defender, then display some sweet footwork to gain a few more yards. I witnessed his future right then and there.

Zander Gray already has back-to-back thousand yard seasons (1,469/Soph, 1,707/Jr.), a state championship medal, plus something he has always had. The will to win.

The Viking senior has logged a :4.69 forty and can cover a hundred meters in :11.01. Combine that with a bench press of 315 big ones and incredibly strong legs, you have a RB no high school defender wants to meet head on.

And did I mention his stiff arm? On more than one occasion over the past two seasons, Gray has literally drilled a defender to the turf in full stride with a flick of his club-like right arm.

How good is this youngster? Zander Gray has played in 26 games the past two seasons, usually splitting time at I-Back, and still managed to rack up 15 hundred yard plus rushing games and 45 touchdowns.

In the Class A title game a year ago versus Kearney, It was Zander that literally carried his team to victory on that final drive after Milton Sargbah went out with an injury.

All things considered, Zander Gray must be right at or near the top when discussions arise about who is the best RB in the state of Nebraska.

On opening night a year ago against Papillion LV South, Jevyon Ducker flashed some fabulous lateral moves and field vision on a sparkling 63 yard TD jaunt. The newcomer also caught 8 passes for 133 yards and an additional score in the Thunderbirds 55-37 win. This was just the beginning of an extraordinary 2018 for the youngster.

Ducker ended up with only 111 yards rushing through the first two games for Bellevue West in 2018. But the next nine outings, Jevyon reeled off a string of nine straight hundred yard games totaling 1,596 yards and 25 touchdowns. Throw in his 486 receiving yards and 6 TDs and you have one of Nebraska’s most complete prep RBs…...and just a sophomore.

I think Jevyon Ducker is the most exciting RB in the state at this point in time. His lateral movement and vision speak for themselves, but the kid also hides the ball well and protects the pigskin extremely well for a sophomore.

Ducker excellerates out of the backfield quickly, can cut on a dime with either foot and has the ability to literally bend his body to avoid a tackler. He can be a slasher or a glider, depending on the situation and his cutback ability is absolutely superb to say the least.

Jeyvon is obviously a receiving threat out of that T-Bird backfield and seems to have a planned route after catching the ball, although we all know that is difficult to pull off without altering it during the course of any play. Nevertheless, that in itself shows the football intelligence this young man illustrated last season.

If Jevyon Ducker can bring his 40 time down a bit, he’ll have bushel basket full of Division One offers by the time he is a senior. South Dakota State and Purdue have already offered.

Also having Thunderhogs up front like Thomas Ault, TJ Griffin and Kaden Lind blowing open those holes can’t hurt either.

All Burks did a year ago was surpass Omaha Burke’s single season rushing record by 191 yards. His 1,981 yards in 2017 eclipsed Jordan Nelson’s 2012 total of 1,790 big ones. The Bulldogs, who came within a single point of advancing to the Class A finals the past season, have had some high calibur backs over the years too.

Names like Jimmie Forsythe, Victor Breakfield, Timmy Wurth, and Rob DeBoer are some of the names Burks passed in his initial year as a starter for Coach Paul Limongi.

Here’s a little secret about James Burks just in case you haven’t heard. He is a Three Time State Wrestling Champion for the Bulldogs. Less than two weeks back, James and his younger bro Jakason represented the United States at the Greco-Roman cadet world championships in Zagreb, Croatia. Impressed?

Yes, James is that good on the mats and often times, all that wrestling ability has a way of making its way to the football field in the form of superior strength and balance, just to name a few attributes.

Needless to say, Burks is a tough runner who can shed tacklers. He has a low center of gravity at the point of contact and can recover quickly after bowling over a defender. James is not the flashy, cutting style back like Jevyon Ducker. His cuts are more subtle and often times mirage-like, which makes it difficult for a defender to plant and tackle.

I cannot tell you what Burks 40 time would be, but the lad was fast enough to break a 91 yard TD run against Bellevue West, pulling away during the play.

When all is said and done, James Burks abilities can probably be summed up when viewing his game film and rushing yardage totals against Class A’s best…..Omaha Westside, Bellevue West, Millard West and state champion Omaha North.

Pretty amazing against that calibur of competition, and, the kid even intercepted a pass on defense against Lincoln North Star.

Next Up: Nebraska prep football returning 1000 yard Pass Receivers for 2018.

And in the coming days….. more Premier Running Backs.