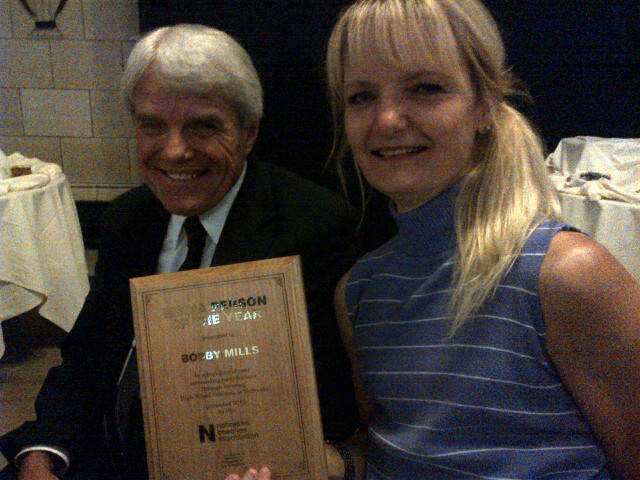 My little sister Sheri (right), the only sidelines partner I've ever had. We will walk them again Saturday Sher.

I had a dream last night. It was vivid, as real as a high school football game. I dream about those games often, you see, standing on the sidelines. But this one beats them all.

The place was majestic. There was a haze hovering above, dancing up, over and all around the four banks of lights. Four, I tell you. Never saw that before.

There were people everywhere, young and old. They came to see a game involving special players who came from all points in the state. Maybe they were All-Stars, these players, but some came to see something else as well.

There were MEN, special individuals, and all dressed alike. Eighteen of them, each and every single one with this magic hue about them. Perhaps I shouldn't be here, but each and every one of these MEN had story to tell, besides I’m not alone. My little sister, my old 8-Man sidelines partner Sweet Sheri is here by my side. We will stay.

I see Nolan Beyer, the Sidney St. Pats tough guy. He tells us about the time he quarterbacked his green and white clad Irish to a 35-15 win over Coleridge in the 1986 Class D-2 title game. Beyer said he rambled for 129 yards and scored on runs of 48, 2 yards and tossed a 33 yard TD pass to John Tedesco. St.Patricks had ‘em 21-0 after the first quarter and never looked back.

Okay, so Scott Gray had 150 yards that night for Coleridge. The Irish won, right?

And speaking of Scott Gray. Scott and his Coleridge buddies went right back out to Sidney and the next year and stole the D-2 State Title right back from St. Pats, minus the graduated Mr. Beyer. Beat up on ‘em 52-34 in that 1987 8-Man game for all the marbles. Gray zipped for 183 yards and scored a pair of first quarter scores.

Scott, you forgot to tell them about playing in three Class D-2 title games and rushing for 5,632 yards in our career for the Bulldogs. No problem, I just did.

Right next to Gray is his rival Brent Gatzemeyer from Bancroft-Rosalie. This guy was a sophomore standout for Bancroft-Rosalie’s 1985 Class D-2 State Championship team. Yeah, a sophomore! Coach Jon Cerney’s forces knocked off a previously undefeated Dunning-Sandhills crew 56-20 that night. Gatzemeyer ran all over John Bring field in Bancroft that night to the tune of 146 yards and 5 TDs. Gatz also piled up 5,348 yards in his career too. Not far off Scott Gray’s career rushing pace.

Always wondered if Coach Cerny lived up to his promise and had his gal barber cut all his locks off? I’ll bet he got away with a crewcut.

And I hear this sweet voice coming from the press box. Smooth as silk. Heard it many, many times. I swear it sounds just like Russ Batenhorst. Yeah, has to be. There is only one Russ Batenhorst and he’s speaking about the legendary Coach Bill Mimick.

Bill had to win over 230 games along the way right?

And look, alongside Coach Mimick are his two sons, Jeff and Tom Mimick! Bill’s Spencer-Naper teams were unstoppable. They won a D-1 championship in ‘88. Thumped Ansley 50-14, no less. And that Tom Mimick. Still holds the single season record of 2,168 yards at Spencer-Naper and will for all time. Heck, young Jeff Mimick came along 14 years after Tom and ran for 1,630 yards. The Mimick tradition.

Oh good lord, there’s Dean Steinkuhler, the Sterling Jet. Not too many stepping up to call that guy a nasty name then run. You’d have to be crazy. Steinkuhler won the Outland Trophy in 1983 while destroying opposing lineman in a Husker uniform. Spent 8 years in the NFL too. Yessir, Mister Steinkuhler.

Right next to Dean is another NFL guy named Randy Rasmussen. Played for tiny Elba, was a man among boys at Kearney State and not only played for the New York Jets, but started in Super Bowl III. Dude has a shiny Super Bowl ring to show for it..

Down the line is Beemer Coach Ron Peck and his star running back Craig Hass. That duo teamed up for an 8-Man title in 1978 when the purple clad Bobcats outlasted Dawson-Verdon 35-28 in 2 overtimes. Hass ran for 131 yards and went on to be a 3 time 1000 yard rusher. That Ron Peck could coach, couldn’t he?

Look…..that can’t be La Vane Johnson from Eagle can it? Honestly cannot tell, but I do know big 204 pound La Vane led his Golden Eagles team of Eagle to an undefeated and 9-0 season back in 1959. Man among little boys was La Vane Johnson. Rushed for 1,848 yards, 33 TDs and 218 points in ‘59 for Eagle. Earned a scholarship in 1961 while playing for Nebraska.

I also spot Jim Scott, Ken Mehlin and Terry Connealy. There’s a trio of former Huskers that played 8-Man football! I recall Scott being a standout for Ansley back in 1988 and then starting at center for Nebraska in 1991/1992. And how would you like to be across the line from rugged, 6-0, 285 pound Ken Mehlin from Humboldt? No thanks. The two time All-Stater for Coach John James and an All-Big Eight for the Cornhuskers in 1993 playing both Offensive center and guard!

Last, but not least, Terry Connealy of Hyannis, the youngest of 7 children. Big Terry played at 6-5, 235 for the Longhorns in 1988, eating opposing runnings backs for lunch and opening holes for his own RB Jay Herman, who rushed for 2,147 yards that season. At Nebraska, Connealy was a monster driving force for the 1994 National Champion Huskers. All Big Eight and every conceivable Academic award known to man was this bright young man.

And………..I just knew these two guys had to be here…...wherever we are. Holy Cow, it’s Dale Van Housen from Polk-Hordville and Marquette’s incomparable Lynn Menke. These dudes did anything they wanted in high school…….in any sport.

Van Housen bolted for 2,614 yards in 1989, and nearly out dueled Omaha Central’s Calvin Jones for the State Rushing title. He often ran out of bounds instead of scoring to give one of his younger teammates a chance to log a touchdown. Dale also won the All-Class Gold Medal in both the Long Jump and Triple Jump at the State Track Meet during his career.

Lynn Menke……...3-Time 1000 yard rusher for Marquette and phenomenal track man there. Lynn reminds us his :49.0 four hundred meters record stood for at least a gazillion years. No, maybe that’s what Uncle Brad said, but it wasn’t broken for years as I remember.

And who can forget when Marquette and their three 1000 yard rushers...yes THREE, blanked the mighty Odell 12-0 the 1983 Class D-2 State Title game. Right out the door of the old school on that Cubs turf. So cool.

So real, so lifelike. All these 8-Man Supermen gathered in one magical place.

“How I love when my thoughts run,

To the Land of Make Believe,

Where everything is fun

So, why am I here? Who was brainchild that lured all these shining stars to one place? So surreal, yet so right. And the matching blue shirts.

The thoughts that you

Have hidden in your heart.”

I will never forget this dream as long as I live. The faces of Nebraska 8-Man Football standing 10 yards from the promised land. All together as One. Why are they here?

Why am I here? Is that you Coach McEvoy?

“When you start a brand new day,

Let your heart show you the way,

And make a dream or two