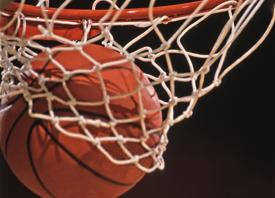 *In the Class D-2 final it was 6-6 Matt Freitag’s basket with just 5 seconds left that lifted CHB to a 50-48 win over Lindsay Holy Family. Brandon Fraley dropped the dime to Freitag, who responded with the winning shot.

It was an especially heartbreaking result for the Lindsay Holy Family duo of Tony Kurtenbach and Randy Preuss, who held CHB’s Matt Freitag to just 7 points until the winning basket, after the 6-6 senior had come off state tournament games of 24 and 30 points. But Freitag slipped away for a total of about two seconds, enough time to receive the assist from Fraley and drop in the winning basket.

Chester-Hubbell-Byron played incredibly clean basketball in the game, committing only 11 turnovers. Stocky, 5-11 CHB guard A.J. Gausman led the CHB co-op with 23 points, including 5 baskets from beyond the arc.

Gausman, playing with a severely sprained ankle, he suffered before districts and reinjured in the days leading up to the state tournament, came up big under the brights of the Bob Devaney Sports Center.

*The D-1 Tournament scoring title was a two-man race between Paxton’s Tanner Anderson and Lanon Meyer of Deshler. Anderson’s games of 25, 30 and 17 points elevated him to the scoring title with his 72 point total. Meyer was five points back with 67 for the three game state tourney set (30, 22, 15 points)

*The D-1 championship game…….Paxton coach Jody Rhodes came up with the perfect game plan to derail undefeated Deshler…..run the dickens out of the leg weary Dragons. It worked like a charm, but the Tigers still could not put away Deshler until the very end, eventually winning the D-1 title game 42-39.

Paxton, who lost to Falls City Sacred Heart in the 1999 Class D-1 finals, were ready for run in 2000. What made an even better storyline was that Tiger star Tanner Anderson, who missed the first 8 games of the basketball season with a broken wrist, came back with a vengeance the emainder of the season. Anderson, Paxton’s quarterback during the football season, was holding for a field goal attempt in the state football quarterfinals when the kick was blocked. Tanner ended up on the bottom of a pile and emerged with a broken wrist. Unphased by the setback, Anderson returned after the Tigers had struggled to a 6-2 record, leading them to 17 consecutive wins, averaging 24 ppg along the way.

Despite being heavily pressured in the title game, Tanner Anderson still pumped in 17 points to lead Paxton to the 42-39 win. Even bigger was the fact Paxton played the final 9 minutes with 3 starters on the floor with 4 fouls apiece.

Deshler, who shot only 13 of 50 field goals for the game, had two players accounting for 29 of their 39 total points during the loss, Landon Meyer, who led the Dragon scorers with 15 points, and Matt Schoof added 14.

It seemed as though Ponca dared Humboldt-TRS to beat them at the free throw line and the Cardinals obliged by going a perfect 8 for 8 during the final 1:19 of the game. In fact, the Cardinals were an amazing 22 of 25 from the charity stripe for the entire game. To be specific about this fouling thing by Ponca, Indians head coach Bob Hayes actually issued the order to begin fouling with 2:04 left in the game. Ponca trailed only 43-42 at the time.

If I can remember correctly, the Cardinals did not take another shot from the field after that order to foul was ordered by Hayes.

Humboldt-TRS senior Matt Mezger led the winners with 20 points, despite hitting only 6 of 20 from the field. Matt, however, drained 8 of 10 attempts from the charity stripe.

The Humboldt/TRS defense also withstood the 18 point/12 rebound performance of J.D.Roberts, the Ponca Indians 6-7 All-State inside star, who led the way for the losers.

The C-1 tournament scoring crown, as well as the All-Class scoring champion was GICC’s Jeremy Wissing, who was on a mission from minute one of the State Tournament. Wissing canned 80 points during his three games (31, 25, and 24) and single handedly kept the Crusaders ahead of Pierce in the 1st half of the C-1 championship game, scoring 18 of his team’s 22 points.

Pierce sophomore Matt Herian was way back with 55 points (25, 12 18 points), but had a bright future in store for him, as we all found out.

The C-1 championship game saw GICC’s 6-4 Wissing twins fashion a deadly 1-2 punch in the Class C-1 Championship game, each coming through when the Crusaders needed it most.

It was the red hot right-handed Jeremy Wissing, who scored 18 of the Crusaders 22 first half points, that led GICC to their slim 22-17 halftime lead over upstart Pierce. It was still a ball game after three quarters when Bill Gavers squad failed to stop Pierce sophomore Matt Herian, who scored 8 of his total 18 points in that stanza..

But it was the left-handed shooting Jay Wissing who gave the Crusaders the cushion they needed to win their 1st ever State Championship. Jay scored a couple of inside buckets late in that 3rd stanza when the Pierce defense started to crowding brother Jeremy. Jay then buried a three pointer to open the 4th quarter, giving GICC a 33-26 lead and it grew from there. In the meantime, Crusader guards Jamie Douglas and Matt Strand were holding the Bluejays talented guard Travis Test to a meager two points for the entire game after Test had dropped 18 on Wahoo in the semifinals the day before..

Central Catholic ended up outscoring Pierce 23-9 in the money quarter, enroute to their resounding 53-35 Class C-1 championship game victory. The Wissing brothers accounted for 37 of the Crusaders 53 points in the game.

*The Class B final was as close to a perfectly executed game plan as I’ve ever witnessed in high school basketball, especially at the State Tournament. Lincoln Pius coach Ray Forycki formulated a plan of attack that was carried out to near perfection, as the Thunderbolts massacred McCook 77-52 in front a crowd that numbered over 10,000 fans.

My friend Ken Hambleton reported that Pius X shot 64% form the field, hit 94% of it’s free throws, scored 40 points off of assists, pirated 12 McCook passes and won their 5th state title in history and the school’s first since 1992.

The deadly shooting of Thunderbolt guards Nick Heiser and Ben Bixenmann accounted for over half of the Pius X scoring (40 points), while the rotating quartet of Brandon McAllister, Ryan Wesolowski, Ryan Polak and Mitch Heiman dominated the boards, limiting the Bison to one shot possessions much of the time.

What really stood out to me was the fact Lincoln Pius had to rally from a 14 point deficit the night before just to send the Alliance game into overtime, let alone get the win, 72-68. One could have concluded, following that baby, that the Thunderbolts had exerted too much energy to route McCook the next day. Wrong.

Pius employed a 1-2-1 defense much of the game, a defense I rarely saw back then, or since, to frustrate the Bison offense. It wasn’t as if McCook shot that poorly during the game (50%), but the fact they were limited to only 40 shots the entire contest.

Nick Heiser of Lincoln Pius X led all scorers with 22 points, while McCook’s 6-7 Nate Bennett paced the Bison with 18 points, including two monstrous dunks. Yeah, you remember those things.

*Tournament scoring honors went to Omaha Burke’s fine Tola Dada, who racked up games of 28, 17 and 21 points to reach his total of 66 in three games. That was 10 big ones to the good of Bellevue West star Zach Fortune, who finished with 56.

*The Class A championship game saw Bellevue West not only finish 23-1, but avenge their only loss of the season, a 59-57 loss to Omaha Burke. It also erased the bitter memory of the lopsided loss to an 8th seeded Grand Island team the Thunderbirds suffered the year before.

Bellevue West may have taken a page out of Dave Oman’s defensive book while suffocating Omaha Burke, while forcing 17 Bulldog turnovers in the first half, as Doug Woodards team coasted to a comfortable 70-53 Class A championship win.

The Thunderbirds jumped out to a 10-1 first quarter lead and never looked back. So nasty was that Bellevue defense, it limited Omaha Burke to only 16 shots in the first half, while holding the ‘Dogs leading scorer, Tola Dada to zero points. Dada would catch fire in the 3rd frame and finish with 21 points, but it was too late by then.

The late Zach Fortune led the way for Bell. West with 21 points, despite the Thunderbirds 38% shooting from the field for the game. You may recall that Zach tragically lost his life in a car accident on slippery I-29 in November of 2003.

Players from 2000 who made the Career lists on the NSAA Records site: