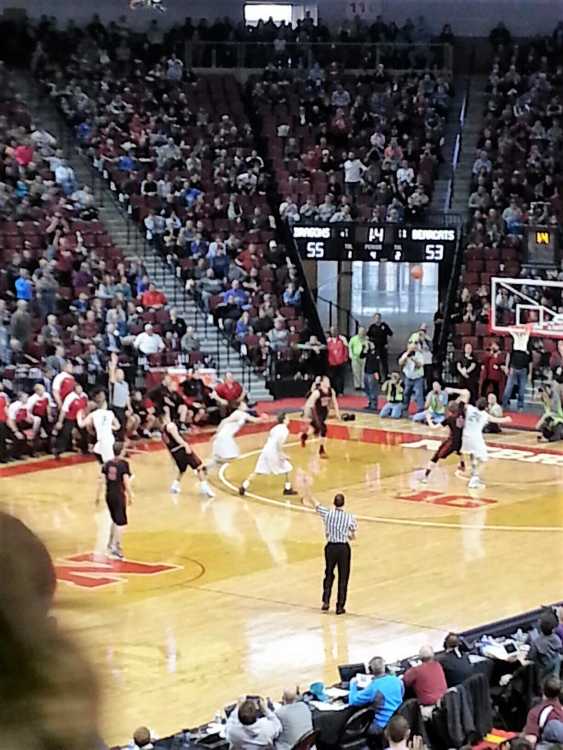 Anybody recall this moment last year in at Pinnacle Bank Arena? *(photo by Bobby Mills)

*This was the first year the Wild Card system was implemented in Nebraska basketball. Chadron took full advantage of the new format by claiming the Class B state championship as a wild card entry.

The Wild card system, although a different format now, is still used in determining what teams qualify for the State basketball tournament.

*The tournament scoring leader was Shickley’s Kevin Anderson with a 3 game total of just 46 points. Anderson had scoring outputs of 16, 11 and 19 points to reach that total. Cory Eikmeier, who smashed every conceivable 8-Man football record there was, was second with 43 points in three games. Defense was the rule in this Class D-2 State Tournament, with only one player able to score 20 points in a single game. Anderson’s teammate Kory Koch hit 20 in the Longhorn’s 46-36 semifinal win over Giltner.

*In the D-2 final, Shickley had to contend with a very physical Dodge basketball team that was coming off three straight 8-Man football championships. This Dodge team basically played “highly skilled” football on the hardwood and did it well. The Pirates had their way for 2 and a half quarters before Shickley cut off the physical Dodge team’s inside game.

Shickley’s offense also heated up in the second half, canning 9 of its first 11 shots, including 5 of 6 in their game clinching run. Kevin Anderson’s 19 tallies led the way for the Longhorns, while Matt Swartzendruber and Mitch Lichti added 13 apiece. Junior Nathan Spurling was a force at the charity stripe in the 4th quarter, hitting 6 of 8, as Shickley outscored Dodge 19-16 to take the 61-52 victory.

Cory Eikmeier and Brian Pieper each had 14 to lead Dodge.

“D-2 Tournament Tidbit” - Matt Swartzendruber, currently the head basketball coach at Sandy Creek, may remember this. If you recall, Shickley fell just short in 1996, losing to 26-0 Filley in the D-2 finals. So Longhorn head coach Dan Sorge made sure the Shickley fellas were happy the night before this year’s finals versus Dodge. He took the team to Misty’s in Lincoln that Friday night and fed them big cuts of prime rib, crab legs, plus $41 in cheese sticks, racking up a bill of $551.26.

Apparently that did the trick as the ‘Horns not only won the hardware, but finished a perfect 25-0.

*The D-1 Tournament scoring contest was a runaway for Pleasanton’s 6-8 Jason Brown, who ripped the cords for 80 points in three games (33, 19, 28 points). Clint Swanson of Johnson-Brock was a distant second, with 55 points in three outings.

*The D-1 championship game was a matter of earning respect for Johnson-Brock, who was unranked coming into the Tournament. The Eagles trailed Pleasanton 3 times early, but went on a 17-6 run in the first quarter to take a 22-13 lead after one quarter of play. The smothering Johnson-Brock full court pressure forced 21 Pleasanton turnovers, at least 5 in each quarter, as the much quicker Eagles swept to a 76-57 romp over the slower Bulldogs. Junior star Clint Swanson led the Eagles with 21 points, 16 rebounds, 6 steals and a blocked shot. I assume Swanson was the Player of the Game. Ya think?

*The C-2 All-Tournament Team had three players from State Champion Tecumseh and rightly so. Seniors Matt Davison (he had hair then), 6-2 Danny Theis and 6-3 junior Bart Sova were named, plus Chris Jewell of Doniphan (6-5, Sr.) and 5-8 Wahoo Neumann junior, Bil Johnson.

*Class C-2 Tournament scoring title went to Matt Davison, despite being held to just 9 points in the title game with Neumann. Davison had games of 22 and 31 and 9, to total 62 for the Tournament. Matt’s classmate Danny Theis, along with Bil Johnson of Wahoo Neumann each had 53 to tie for second most tournament points..

In the Class C-2 Championship game, the good news was that Wahoo Neumann pulled off a major defensive gem by shutting down Tecumseh star Matt Davison to NO field goals. Davison, who averaged 25.3 ppg coming into the contest, went 0 for 8 from the field, including misfiring on 6 shots from beyond the arc. The bad news was that Bart Sova (20 points) and Danny Theis combined for 36 points to pick up the Davison slack, enroute to Tecumseh’s 50-41 win over Neumann..

A 14-7 second quarter advantage helped the Indians to the victory, although Neumann closed the gap to 40-37 with 4:24 left in the game. The Cavs had a chance to edge even closer, but the All-State Matt Davison came up with a steal and score to help cement the win. Tecumseh forced 16 Cavalier turnovers in the game, 10 of which were steals. Bil Johnson was the only Neumann player in double figures with 12 tallies.

The C-1 tournament scoring crown was snared by St. Paul’s outstanding Neil Wardyn, who scored 66 points in three games. Neil’s 32 point outburst against Albion in the opening round, was the single game high in the C-2 Tournament. Aquinas big guy, Jason Campbell had a 3 game total of 53 to rank second in the C-2 carnival.

The C-1 championship game was all about Aquinas showing the state they were not only a football powerhouse, but a basketball force as well. The Monarchs quickness may have worn down St. Paul in the final quarter, but the Wildcats did not go down without a fight.

The two squads were all square at 32 after three quarters, but a driving layup plus an “and one” by Jason Campbell and a steal and score by Brian Samek, put Aquinas ahead to stay, 37-32 with 6:05 left in the contest.

Kevin Scheef’s Monarchs converted 10-14 free throws in the final minute and 45 seconds, to pull away from St. Paul and post a 53-41 victory and Aquinas first ever State basketball title. Campbell led the Monarchs with 15 points, while Brian Samek scored 14 on five of seven shooting from the field. St. Paul’s splendid Neil Wardyn was only able to get off 9 shots, making 5 of those, plus four free throws for 15 game total of points.

*The Tournament scoring title went to Jesse Wood of Chadron, who edged classmate Ben Smith 46-43 in their three games in Lincoln. No player hit the 20 point mark in the 1997 Class B state tournament.

*The Class B final was simply a continuance of the awesome defense Chadron displayed in the upset of #1 Hastings in the opening round of the Class B State Tournament. The Cardinals, who had split two games during the regular season with Gering, took a 19-16 first quarter lead and never relinquished it.

Chadron, who shot a modest 43% from the field in the championship game, managed to get 11 more shots from the field and 7 more free throws than Gering during the title game. Couple that with the Cardinals forcing 16 Gering turnovers, and it all added up to the Chadron 58-47 win over the 20-3 Bulldogs.

Ben Smith and Jesse Wood each scored 18 points to lead the Jim English coached Cardinals, while Joel Janecek paced Gering with 13 points. Brian Judy chipped in 12 points for the Bulldogs.

At the time, this game matched the farthest west teams ever in state tournament championship history.

*The Class A championship game was a story of too much Mike Hahn, Amon Helmstadter, and Tee Mason for Lincoln East. After the Spartans answered an opening basket by Hahn to tie the game at 2-2, Helmstadter and Hahn went to work, propelling Lincoln NE to a 16-1 run and a first quarter lead of 22-8.

The closest the Spartans could get was 54-40 with 4:22 left in the game, but it was junior Amon Helmstadter showcasing his many talents, as the Rick Collura’s Rockets swept to their 3rd straight Class A title in what would go down in history as a golden era in Lincoln NE hoops history.