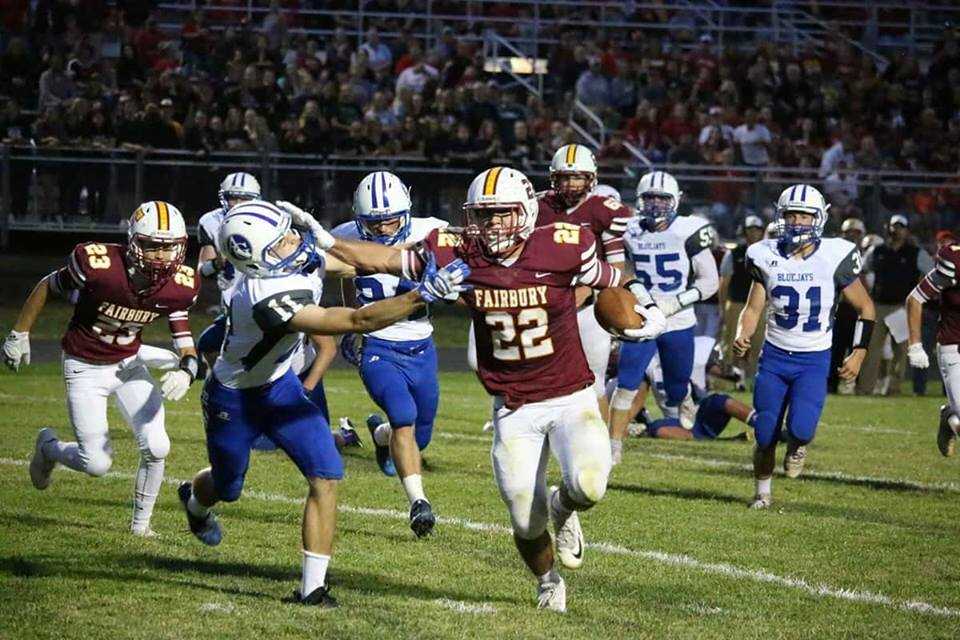 *Jacob Johnson (RB/LB) - Fairbury - “Play every game like it could be your last”. You never had to utter those words to Jacob Johnson. But just like those of us who have have been through the heartbreak, Fairbury’s once-in-a-lifetime running back never dreamed his 3rd carry of the game would be his last in a Jeffs uniform.

Three carries and 34 yards deep into the Jeffs opening round playoff game with Pierce, Jacob went down with what may turn out to be a torn ACL. The loss of Johnson was just too much for splendid quarterback Adam Wasserman and the Fairbury offense to overcome, as Pierce came away with a 36-32 victory.

As a man who who probably watched close to a 1000 Nebraska high school football games through the years, it still cuts deep to football soul to see this. Yes, it’s part of the game, and it teaches an important life lesson, but tell this to a senior in high school.

Defense: 180 solo tackles, 71 assists, 251 Total tackles with 6 INTs and 7 recovered fumbles. Jacob also returned a punt for a score and took a fumble back for a TD. All in all, 73 career TDs.

Thanks for the memories, Jacob Johnson. You were good, very good.

*Dylan Egr (RB/ATH), Warrior Defense - Wahoo - Another big time performance just when the Warriors needed it. It was time to avenge last season’s playoff loss to Kearney Catholic and Dylan Egr made sure that was the case.

The Do-It-All senior exploded for 319 yards on 36 carries and scored five touchdowns in the Warriors convincing 42-28 win over Kearney Catholic and All-State QB, Matt Masker.

Throw in junior All-State candidate, Sam Kolterman (6-0, 195), and you had one of the best defenses in Class C-1. Kolterman, by the way, had 113 tackles coming into this game.

The 9-1 Warriors take a trip to Wayne to meet the Blue Devils next Friday in the Class C-1 quarterfinals.

*Derek Wortman (QB/RB) - Creighton - Backup quarterback stepped in to replace injured two-time thousand yard rusher Bryce Zimmerer when Creighton faced McCool Junction in the opening round of the Class D-1 playoffs. He then stepped up with the game of his life in the Bulldogs 72-0 win over the Mustangs.

It’s not like Derek Wortman suddenly appeared out of Coach Gene Suhr’s basement though. Wortman has been through his coaching process. The dude already had 571 yards rushing and 17 TDs before the McCool explosion. The junior also had completed 19-32 passes for 391 yards and 12 TDs with only 2 picks.

On defense, Wortman has logged 35 tackles (26 solos), had 2 INTs, averaged nearly 10 yards every punt return and a whopping 32.4 yards per kick return. He has fielded only 6 kickoffs, yet has returned a pair of those to the house, one a 48 yarder versus Neligh-Oakdale, and the other being that 70 yard gem in this McCool affair.

*Milton Sargbah (RB/PK) - Omaha North - Hey, what’s the key to a 1st Round Playoff win on a cold and wickedly windy Friday night? Why, it’s Omaha North ground and pound football, of course. And if you be grounding and pounding for head coach Larry Martin, you must be either be Milton Sargbah or Zander “The Dancing Bear” Gray.

In last Friday’s 47-7 win over Fremont, it would have been Mr. Sargbah with the big chunk of Omaha North’s rushing yardage real-estate. The slippery as an eel Viking senior escaped for 237 yards on 22 carries and hit the end zone on runs of 1, 2, 56 and 63 yards.

That gives Sargbah 1,824 yards on just 156 touches and 22 TDs on the season. The guy is still averaging 11.7 yards every time he touches the football. 11.7 yards per carry in Class A football? Has my attention.

Ruff passed the test with flying colors in Gretna’s 45-0 shutout of the Blue Devils, rushing 5 times for 137 yards and 3 scores. Ruff also completed 3 of 4 passes for another 76 yards.

Cole grabbed Plattsmouth’s attention right out of the gate with 1st quarter touchdown scampers of 46 and 43 yards. The senior added an identical 43 yard touchdown run in the 3rd frame.

Gretna hits the road Friday in that much discussed #1 versus #9 road matchup in the Nebraska high school football playoff formats. The Dragons will face a GI Northwest team that topped Columbus, 48-41.

*Dylan Gentrup (QB/ATH) - Boone Central/Newman Grove - Stood out like a shining star in the Cardinals in their first round 40-3 playoff win over Auburn. The standout senior, a two-time 1000 yard rusher and passer, completed 10 of 14 passes for 184 yards and two TDs in the win over the 8-1 Bulldogs.

Gentrup also carried the pig 12 times for 125 yards and two more TDs in the victory. Dylan’s TD passes were caught by junior Will Frey (36 yards) and his classmate, Ethan Dotzler (13 yards).

You have to feel for Auburn, who has faced Fairbury and their talented RB Jacob Johnson, and QB Adam Wasserman duo. I’ll bet Dylan Gentrup felt like both of those dudes rolled up into one to Auburn.

Boone Central/NG takes their road show to Boys Town to meet the Cowboys in the famous Corral.

Johnson -Brock earns a home game this Wednesday, drawing a 4-5 Pender team that just knocked off Guardian Angels CC. No, Pender is much better than theri record may indicate, trust me.

Bellevue West actually trailed the SilverHawks 14-6 at the half. The Thunderbirds wrested the lead away in the 3rd stanza, but still nursed a 20-14 advantage heading into the money quarter before putting it away with that 3 touchdown final quarter.

Stone Kraft is just simply one of finest utility players in C-2. The 5-10, 160 pound senior has 24 pass receptions for 478 yards and 5 TDs on offense. Kraft has also logged 42 tackles on defense and just may lead C-2 in interceptions this fall with his eight interceptions.

Kraft has pirated an enemy aerial in 6 different games this season, including three against Central City, a team that just beat Hartington Cedar Catholic.

Stone has also piled up 98 yards on kick returns, 364 on bringing punts back, and another 134 yards on INT returns for an All-Purpose Yards total of 1,075 yards.

And the wicked thing about this Battle Creek defense is that they are so balanced, sharing the load and flowing to the ball in droves. One thing that really stands out is their incredible 70 tackles for losses.

One could safely surmise, the Braves just dearly love paying visits to the opponent’s backfield and it’s an educated guess that they are inquiring about the weather.

*Noah Mick (FB) - Millard North - Ran for 100 yards on 19 carries in the final game of his Millard North career. The Mustangs were defeated 43-21 in the opening round of the Class A playoffs last Friday.

The punishing Mick finished just short of a second 1000 yard season with his 961 yard total this fall. During his 3 years on the Millard North varsity, Noah Mick rambled for 2,509 yards and 27 TDs.

Daniel Libolt has now run for 1,271 yards and 22 TDs heading into the epic 2nd round battle Wednesday with Kenesaw. Game time in Kenesaw is set for 4:00.

*Jake Archer (RB), Jackson Gordon (CB) - Omaha Skutt - In Skutt’s 23-0 win over Aurora, Archer ran for 136 yards and a score (4 run), while Gordon not only hauled in a 31 yard touchdown pass from Ben Sievers, but the 6-1, 175 pound senior pirated two Baylor Scheierman passes, while playing cornerback on defense.