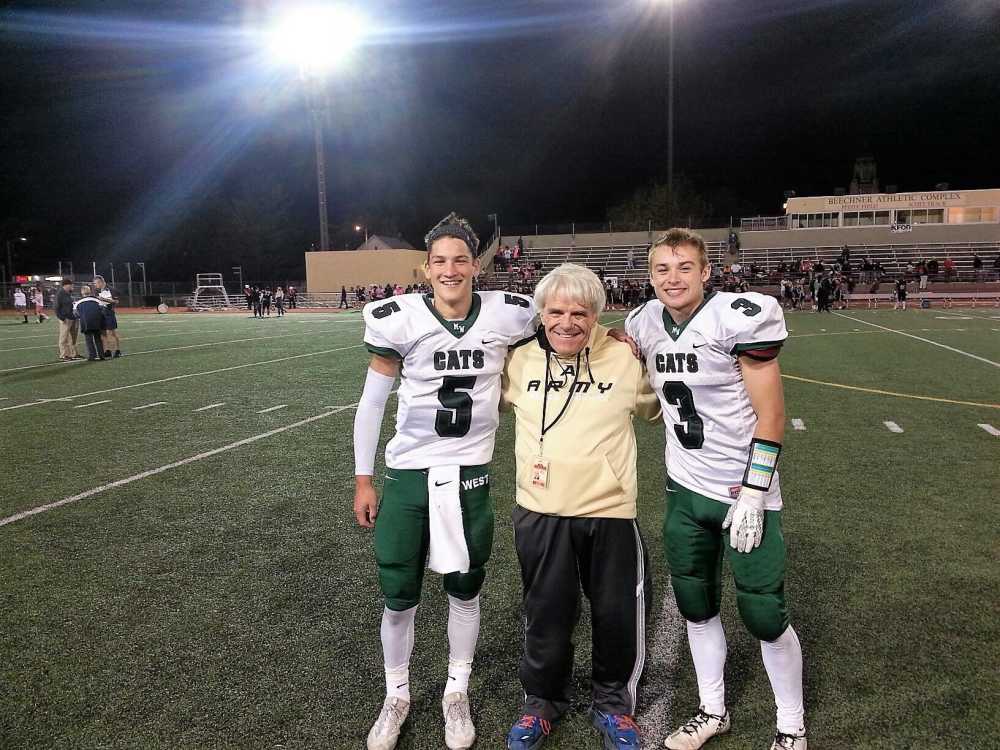 LINCOLN HIGH - There really was no loser in this windswept battle of Class A titans tonight at Beechner Field on the campus of Lincoln High. Millard West cranked up it’s passing game and Lincoln High found out they could play with the best in Nebraska’s big boy class.

The 8-0 and No. 5 rated Links put together a dream season coming into the regular season finale with the the No. 2 rated Wildcats and dropped a 28-17 decision to Kurt Peterson’s high flying Millard West forces, but served notice to the rest of Class A that they will be playa big role in the upcoming playoffs.

Millard West’s outstanding defense hounded Lincoln High’s superb quarterback Cedric Case all night, although his stats do not show it. Case, who led all of Nebraska with his 2,602 yards and 33 TDs coming in, actually hit 25 of 40 windy aerials for 301 yards, but only one of those completions resulted in a scoring pass.

Meanwhile, the Wildcats countered with sure-fire Super-State running back Brody Belt. No, not with Belt’s rushing yards, but his receiving yards…..all 150 of them on just three catches, two of which were long distance touchdown grabs.

Belt’s trigger man on those three lethal paydirt strikes was senior QB Giovanni Guido. The poised senior, whose bloodlines are as good as it gets, wasn’t that far off Cedric Case’s numbers.

Guido completed 9 of his 17 passes on the night, good for 244 yards and the two long scoring strikes to Belt, that covered 45 and 82 yards. The 45 yard TD toss broke a 7-7 deadlock and came on the opening play of the 2nd quarter.

Peterson’s Wildcat defense set the tone in the first stanza on Lincoln High’s opening possession of the contest. Russ Lasauskas (#41) pirated a Cedric Case aerial at the Links 26 yard line, setting up the short field for the ‘Cats offense. Millard West quickly turned that short field into a score, with Brody Belt doing the honors with a 1 yard run.

On the Links following possession, Case marched his team straight down the Beechner Field turf, but Millard West again thwarted the drive when Matt Sorich (No. 4) intercepted a Cedric Case pass.

The Wildcats took the ball all the way to the Links 4 yard line before Sam Fedde missed on a 21 yard field goal attempt.

Still running his offense into the teeth of the stiff 30 mph winds, Lincoln High’s magical junior QB Cedric Case, fashioned a 8 play, 80 yard drive that culminated with a 16 yard TD pass to Wynn. That squared the game at 7 and showed that the Links were not going away.

Then came the 45 yard Guido to Belt touchdown, that was actually a short pass. The shifty Belt did the rest with some crisp blocking aiding the cause.

The Wildcats tacked on another score before halftime when Guido fired a frozen rope dandy right into the wind, and right into the hands of a diving Hunter Schnuerle. The play covered 10 yards.

Lincoln High cut the lead to 21-10 when the Links offense lined up for a 54 yard field goal attempt amidst “watch the fake” warnings from the Millard West coaching staff. Well, it wasn’t a fake and Simon Joseph blasted a wind aided 54 yard field goal right through the uprights, breaking his own record of 48, which came the week before in a 37-10 win over Lincoln Southwest.

Once again, 3 plays and 50 seconds later, Millard West answered the Links when Giovanni Guido hooked up with buddy Brody Belt for a spectacular 82 yard touchdown pass. Sam Fedde added the PAT and the ‘Cats were up 28-10.

But not for long. 36 seconds long to be exact.

On the first play following the ensuing kickoff, Cedric Case hit quick-as-a-wink Zion Perry with an 18 yard pass, then ran the exact play that produced a 48 yard touchdown play.

It looked like the scoring floodgates were finally going to open up, ala Omaha Westside 73-62 over Bellevue West scoring barrage.

Millard West coach Kirk Peterson was impressed by this Lincoln High football team. The fairly obvious passing excellence of Cedric Case and his blinding speed receivers was mentioned, but the Links defense came to play in the second half and demonstrated this was a well-rounded football team. Peterson was quick to point that out after the game.

In the final analysis, the Millard West “D” was fantastic and Brady Belt was sensational, as usual. Yes, he was held to under a hundred yards rushing (68-16 carries), but the senior did serious damage with his 150 yards receiving a two scores.

Giovanni Guido took game rushing honors with his 78 yards on 16 carries, but the air stats also were superb, as mentioned before (9-17-244 yards/3 TDs). Big Jacob Harmdierks had a good night with his 4 receptions or 80 yard effort for the Wildcats.

Frazzie Wynn led the Lincoln High ground game with 61 yards on 13 touches, while the amazing Zion Perry was an absolute blinding speed standout, catching the football with his 142 receiving yards on 13 catches.

Now we await the playoff pairings to be announced by the NSAA later this morning. Millard West may well be seeded No. 2 in light of the Omaha North loss to Lincoln Pius. Kearney could be in line for that top seed in Class A.