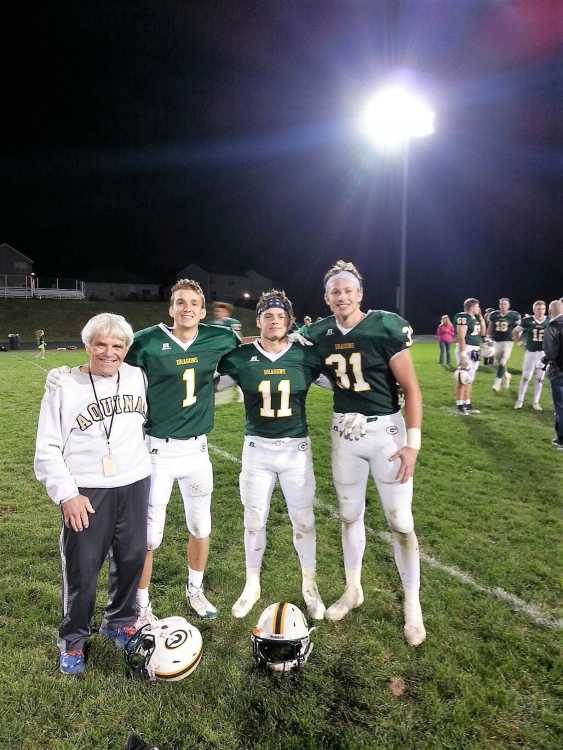 GRETNA - When two of the best defenses in the state meet head to head, something has to give. The “give” usually comes in form of turnovers, and it was that stingy Dragon defense that pounced not one, but two bobbled Elkhorn South punt snaps that gave Gretna’s offense the opportunity to cash in on the errors.

The Dragons offense was up to the task, cashing in both opportunities to post a 24-14 over the two-time defending Class B champions in front of a packed house.

In the process, Gretna put an end to Elkhorn South’s 34 game winning streak, one that spanned the past three seasons. The last team to beat the Storm was Beatrice (42-35), during the 1st Round of the 2014 Class B playoffs. Moses Bryant was a freshman that year.

The defenses dominated the first quarter of this long awaited matchup until Elkhorn South finally broke the ice. Big Cole Hanafan, all 240 pounds of him, rolled to his right on a 3rd and goal at the Gretna two, then found Jared Jennings for the score. Just :54.6 was showing on the clock.

The first of two mishandled Elkhorn South punt snaps came at the Storm 45 yards line with 1:47 left before halftime. A Gretna lineman fell on the loose ball at the Storm 33 and the Dragons were in business.

Quinn Mason then hit big 6-6, 240 pound Morgan Bateman for a 17 yard gain on a 2nd and 8 play from the Storm 31. A targeting call advance the ball to the Elkhorn South 9, then a holding penalty then moved it to the Storm half yard line. 1,248 yard rusher Tanner Tierney took it into the end zone from there, Kortlan Franke booted the PAT, and the two Class B unbeatens were all square at the half at 7 apiece.

Quinn Mason had a pass intercepted on Gretna’s opening possession of the second half, but made amends a minute later when the heady senior field general fired a bullet 42 yard TD strike to 6-1, 180 senior, Noah Burghardt.

With 8:04 left in the 3rd quarter, Gretna had themselves a 14-7 lead and Elkhorn South found themselves in strange territory…..trailing for the very first time in 2017.

The real damage for the Storm came on their next possession when they suffered another bobbled punt snap This baby hurt worse, as Gretna pounced on the ball at the Elkhorn South 13.

Gretna quickly advanced the Storm 3 as the game entered the 4th quarter, only to be called for two straight holding calls.

With the ball sitting on the 24 yard line and facing a 2nd and goal, it was once again Quinn Mason looking for, and finding Noah Burghardt for a touchdown, a 24 yarder.

I talked to Gretna head coach Dave Shrader earlier in the season after game 4, about how many total yards his 1st unit defense had given up to that point. He reported that they had surrendered only 211 rushing yards and 270 passing. That’s 481 total yards in FOUR games.

Then and there, I knew Gretna just may have one of the best defenses in 11-Man football.

Considering those statistics, a two touchdown lead over Elkhorn South with a bit less than 2 quarters of football left in this epic battle, seemed like it may be too much for Elkhorn South to overcome?

That thought was erased in a hurry when Cole Hanafan hit a streaking Jake Knott for a slick 38 yard scoring pass no less than two minutes after the Gretna score. The Storm was back in business, trailing only 21-14 with plenty of time (8:36) left in this regular season finale.

But the Dragons swarming, stifling defense just turned it up another notch, forcing quick passes by Cole Hanifan and forcing the Storm into unwanted 4th and long situations they had to attempt to convert.

Meanwhile, on offense, Gretna QB Quinn Mason and RB Tanner Tierney were coming through in the clutch. In fact, Mason absorbed a vicious hit from Moses Bryant following a nice 17 yard fun down the Storm sidelines. The legal, clean hit knocked Mason out of the game, but the senior gamer returned minutes later to direct Gretna downfield, along with some tough running by Tierney out of the Wildcat formation.

Cole Ruff’s punting also kept Elkhorn South in the hole much of the night, particularly the last howitzer that pinned the Storm back on their own 2 yard line.

The amazing Moses Bryant was held under a hundred yards, gaining 92 yards on 24 carries and nearly every tote a gang tackle-type crunch. The Storm, in turn, did an excellent job holding the great Tanner Tierney to 73 yards on 17 touches, 42 of those coming on the opening play of the 3rd stanza.

Cole Hanifan, hounded all night with that fierce Gretna pass rush, finished 11 of 25 for 123 yards and a score. The Dragons Quinn Mason fared a bit better, hitting 6 of 14 aerials for 122 yards and 2 TDs.

I might also mention that Gretna LB Joe Johnson was a defensive standout all night for the Dragons. Business as usual for No. 31.

Now it’s sit and wait until Saturday when the NSAA releases the 2017 playoff pairings. It certainly would appear that Gretna might grab that No. 1 seed in Class B.