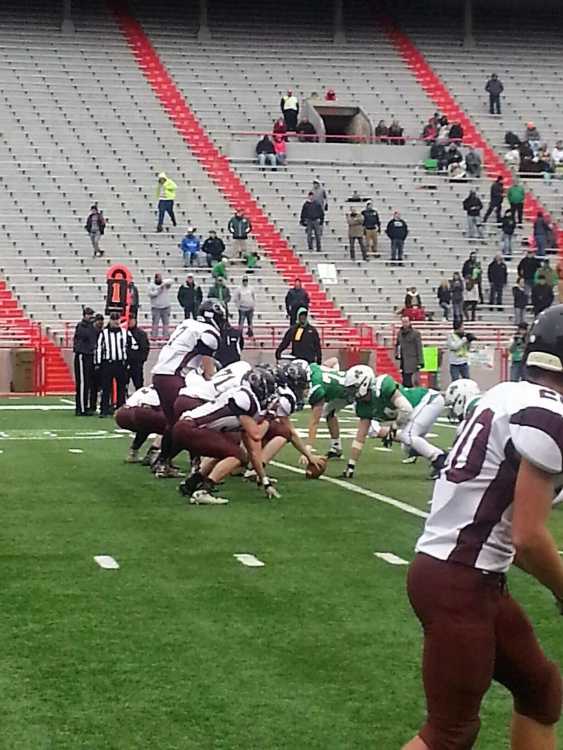 Twin Loup's Alex Horky (#20, white, near side) is one of 8-Man football's most versatile players. *(photo by Bobby Mills)

Don’t forget to read my salute to GI Northwest, which appears at the bottom of this page. The Vikings have unofficially clinched a Class B playoff spot.

Horky finished the 8 game regular season with 1,582 yards with just 131 carries (12.1/carry) and 34 TDs. The standout senior also has 98 tackles from that LB slot for the Wolves, who were in the D-2 Finals a year ago.

Super coach Mike Kozeal will have a Bye week to get his troops prepared for another D-2 Title run.

Sargbah has now sprinted for 1,469 yards and 17 touchdowns in 8 games for Larry Martin’s Viking forces. What some folks overlook is the fact that the senior sensation could reach the 5,000 yard career rushing mark, should North advance deep into the Class A playoffs.

Right now, Milton’s career rushing total sits at an unofficial 4,201 yards and it would take a playoff run of 799 yards to pull it off. Stay tuned.

*Zander Grey (RB) - Omaha North - 20 carries for 94 yards and a touchdown against Millard South vaulted “The Dancing Bear” over the 1000 yard rushing plateau for the second straight season. Heading into the regular season closer with Pius X, Zander Grey is now at 1,111 yards and 18 TDs.

*Luke Sims (FB) - Creighton Prep - Powerful 240 pound junior Sherman Tank crushed his way to 148 yards on 21 carries in the Junior Jays 24-7 loss to Kearney. I mean to tell you, this guy is just plain frightening to watch when he gets the football.

On one drive last Friday in Kearney, Sims carries every single play (9 times) during a 64 yard drive that unfortunately ended without a score. But to be on the Prep sidelines and the ball on the near hash gave me a bird's eye view of the bodies he battered and yards after contact he had. That’s not counting the Excedrin headaches he delivered in the process.

Sims, who has only 84 carries this season, still has 664 yards and 13 TDs. Good grief what a specimen.

Kudos also to my friend Tim Johnk, who is doing an outstanding job in his first year as Head Coach of Creighton Prep. You were made for this gig, my friend.

Sadly to say, I do not have the names of Tanner’s offensive lineman because I haven’t had an opportunity to talk to head coach Dave Shrader lately. We’ll change that Thursday when I camp out on Gretna’s field the night before, awaiting the long anticipated matchup between the Dragons and Elkhorn South.

*Jaden Johnson (RB) - Columbus Lakeview - Was one of the heroes for coach Kurt Frenzen’s Vikings in their huge 26-20 win over Adams Central. Johnson ran for 129 yards on 23 carries and scored three touchdowns on runs of 5, 11 and one yard out. No touchdown was more critical however, then the 1 yard TD run Jaden scored as time ran out.

Lakeview continued to pound out the ground yards against Adams Central, putting up 310 yards rushing against the Patriots. Jacob Frenzen was also a force in the contest, running for 88 yards on 18 tries, making 11 tackles on defense, two of which were Evan Johnson sacks.

Lakeview can unofficially make the C-1 playoff field with a win over Ord this week.

This lad is a tough customer and can really drag tacklers with him for sizable yards after contact. Another thing I like about Cotton is his pad level. Low to the ground, which makes it difficult for would-be tacklers to get a clean hit on him.

That puts Cotton at 1,070 yards for the season (13 TDs) for 3-5 Papio South. A victory over Omaha Central will unofficially gain the Titans a Class A playoff berth.

*Michael Koch (QB) - Columbus - Didn’t get very many carries in the Discoverers 64-7 win over Schuyler, but made the most of his short night. Koch toted the football just 9 times for 199 yards (22 a pop) and four touchdowns. Michael’s scoring runs were from 19, 71, 53 and 10 yards away.

You know what? If you pick All-State football teams each year, you just find a place on your Class B team for a young man like this.

*Dylan Gentrup (QB) - Boone Central/Newman Grove - In the Cardinals 36-19 win over Columbus Scotus, Gentrup rushed for 158 yards on 23 touches and also completed 8 of 12 passes for 115 yards and 3 more scores.

For the second straight season, Gentrup is a dual 1000 yard quarterback. His stats after 8 games for the 6-2 Boone Central/NG Cardinals are as follows; 90 of 161 passes for 1,308 yards with 9 TDs/5 INTs. The highly talented Albion product has also rushed for 1,017 yards and 13 TDs.

Here is another dude you find a spot for on your Class C-1 All-State squad.

*Bailey Darnell (RB) - Auburn - The Auburn junior rushed 9 times for 129 yards and touchdown runs of 25 and 69 yards in the Bulldogs 41-0 win over Syracuse. Darnell also had 4 receptions for 65 more yards, which included a 33 yard scoring toss from Drew Dixon.

*Spencer Warner (RB) - Louisville - Super-charged the Lions with his 262 yards on 27 touches and a 29 yard TD in their heartbreaking 35-28 loss to Falls City.

*Rudy Vrtiska (RB) - 6-0, 175 pound senior was a superstar in the Tigers 35-28 win over Louisville. Vrtiska ran for 171 yards on 19 carries and scored two touchdowns on runs of 29, 67 yards. Rudy also returned a kickoff 88 yards for a 3rd TD, then added a 4th when he hauled in a 40 yard scoring aerial from Quarterback Collin Cook.

*Ty Swanson (QB) - Wood River - Sophomore QB hit 22 of 41 passes for 320 yards and two scores in the resurgent Eagles 48-0 thumping of Sandy Creek. Grant Gannon, who caught a 27 yard TD pass, was Swanson’s favorite target, hauling in 9 receptions for a whopping 194 yards. Cade Ludwig had the other touchdown catch from Swanson, covering 11 yards.

It appears that Wood River, under the new direction of Jeff Ashby, one of Nebraska’s finest 8-Man football coaches, employs a dual quarterback system. Junior Tanner Hermann actually leads Wood River in passing yards with 990 and 7 TDs. Ty Swanson isn’t far back though, with 717 yards and the two Sandy Creek scoring passes. Hermann has thrown 167 passes thus far in 2017, while Swanson has 106 pass attempts.

Good to see Wood River enjoying some success at 3-5 this fall. This football program was in the doldrums, with player numbers dwindling each year. In his first season, Ashby has led the Class C-2 Eagles to more victories (3) than they had in the last 3 years combined.

*Alex Schreiner (RB) - Lincoln Christian - Had scoring runs of 26, 65 and 60 yards in the Crusaders 34-14 triumph over Milford-Dorchester.

And then there is 5-11, 190 pound junior, Caleb Schuppan, a mean hombre for Cardinals. In that Gibbon game, Schuppan had 11 unassisted tackles and 3 assists for 15 total crunches. The sure tackling junior has 91 stops for the season, but 62 of those are solos.

Doniphan-Trumbull has unofficially qualified for the C-2 playoffs with that Gibbon victory.

*Christian Harring (ATH), Drew Bippes (QB) - Falls City Sacred Heart - Harring rushed for 135 yards on only 5 touches and two TDs (44, 74 yard runs) in Sacred Heart’s 48-0 win over Pawnee City. Bippes was close to perfection with his 9 of 10 passes for 68 yards and two scores.

*Carter Terry (QB), Blake Westerby (SS), Riley Schliep (WR), Brady Glause (DB) - Grand Island Northwest - All of these gentlemen plus, four defensive stalwarts, helped the Vikings rally from a 28-7 halftime deficit to defeat District foe Aurora, 35-34. If Tony Chapman described Northwest’s final seven first half “look like Friday the 13th”, that 2nd half comeback must have been a sight to see.

Junior QB Carter Terry keyed the rally and finished 21 of 27 passing for 264 yards and No interceptions. Terry has suffered some misfortune with INTS, but the last three games there has been only one misfire. There was a 4 game stretch earlier this season where the junior pitched 9 picks.

That may be in the rearview now, as Northwest has unofficially clinched a Class B playoff spot.

Riley Schliep caught a pair of 17 yard scoring receptions, on his way to a 7 catch, 106 yard night. Danny Fisher had 4 receptions for 87 yards and a big 60 yard touchdown catch late in the 3rd quarter that pulled the Vikings within 28-21. Brady Glause played “rally guy” when he picked off a Bailey Scheierman aerial and returned it 38 yards or a score. Northwest trailed 28-7 at the time.

And those Viking defenders? Same gig, different day for this rugged bunch. As usual, Blake Westerby led the way with 18 tackles (15 assists), Michael Schomer added 15 stops (all assists), Ty Heaton chipped in 14 tackles (13 assists), Isaac Lemburg logged 13 stops (7 assists) and junior Cooper Kiser had 10 tackles (7 assists), 3 tackles for loss, two of which were sacks. All in all, Northwest has 9 tackles for losses.

Why did I mention all the assists and TFL? It simply means that the Viking defense is gang tackling and penetrating the line of scrimmage to get those tackles for losses.

And…..Blake Westerby, and his 110 total tackles leads the State in the 11-Man football ranks, according to MaxPreps.