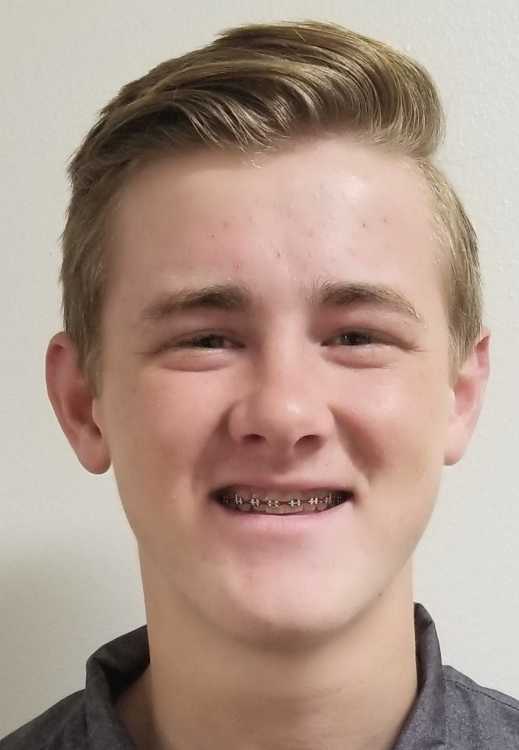 You’ve heard the phrase many times before, but this couldn’t have happened to a nicer young man. Will Huffman missed portions of his freshman and sophomore seasons with injuries, but the killer came last year when he went down in game 4 of the regular season.

Huffman had already rushed 34 times for 314 yards against Eustis-Farnam when he suffered a broken fibula. Will had piled up 814 yards and 12 TDs when the season ending injury occurred.

In addition to Huffman’s 33 rushing touchdowns for 4-2 Maxwell, he also has 6 receptions for 203 yards and 4 more scores. Will has also returned two kickoffs for TDs as well for a grand total of 39 TDs in just 5 games. On defense, Huffman has 58 tackles (42 solos, 10 for losses) and a couple of INTs.

Maxwell has two regular season games (both at home) remaining with Sandhills-Thedford and Anselmo-Merna, then hopefully a playoff run. Just to let you know, the single season rushing record at Maxwell is 2,823 yards, established by Jaylon Sturdivant back in 2014.

*Cam Jurgens (ATH) - Beatrice - 6-3, 240 pound Husker recruit was busy in the Orangeman’s 35-12 win over Waverly. Jurgens rushed 18 times for 112 yards and 2 TDs (3, 4 yards), caught 3 passes for 45 yards, made 3 tackles and picked off a Waverly pass. Beatrice is currently sitting at 6-1 with regular season games remaining against Crete and Norris.

Cotton, who doubled his season touchdown total in the victory, scored all five TDs from inside the 10 yard line (7, 6, 8, 7 and 4 yards). Chandler’s season rushing total has now reached 943 yards for the season.

That gives Tierney 1,105 yards and 15 TDs going into the last two games of the regular season against Elkhorn and Elkhorn South.

The Cadets had to pull a trick play out of the bag to top Wayne last Friday night.

The multi-talented Pilakowski took the ball and appeared to be sweeping around the end on a run, but pulled up and nailed Vander Griend with a 24 yard touchdown pass with 52 seconds lift in the game. Just like they drew it up and rehearsed it in practice (50 times).

With Wayne keying on Pilakowski, Coach Troy Schlueter turned to 6-0, 178 pound junior Gage Vance to sneak up on the Blue Devils. Vance, who had run for only 128 yards the past 6 games, dashed for 136 yards on just 10 touches and a critical score in the game.

The long striding, hard running Benson rolled for 1,695 yards and 21 TDs a year ago, so this year’s success is no surprise to anyone. This dude is really, really good.

*Edwin Baptista (RB) - Friend - Was huge in Friend’s 20-8 win over tough Diller-Odell. Baptista took off for 199 yards on 40 carries in the rain, scoring on a critical 16 yard burst in the Bulldogs win.

*Lucas Thingstad (RB) - Wynot - 5-11, 170 pound back came within 4 touches of tying the 8-Man record for the most carries in a single game in the Blue Devils hard fought 26-20 win over Emerson-Hubbard, played in the wind and rain.

*Landon Lenz (RB) - Medicine Valley - Late catching up with this performance, but Lenz tore up Southwest two weeks back in the Raiders 42-6 win. The 145 pound senior, who rushed for 1,129 yards a year ago, rambled for 154 yards on 17 carries and scored 3 times in the win.

Landon’s big night raised his 2017 rushing total to 822 yards (16 TDs) and stretched his string of 100 yard plus rushing games to 13, going back to last season. Lenz last rushing game under a hundred yards came on opening night 2016, when he gained 94 yards against Wallace.

Landon Lenz is one tough cookie for only tipping the scales at only a buck 45. Powerful runner with terrific vision and great cuts.

*Christian Timm (RB) - Eustis-Farnam - How tough is this dude. Wauneta-Palisade drills Eustis-Farnam 62-0, but Timm goes over the coveted 1000 yard rushing mark with his 110 yards on 22 carries in the loss. Timm now has 1,078 yards for the 2-4 Knights and I’ll bet every single one of those yards are hard-earned.

*Cole Fossenbarger (QB), Tyler Hahn (WR) - Johnson-Brock - Fossenbarger, one of 8-Man football’s most accurate passing quarterbacks, nailed 15 of his 19 throws for 224 yards and three touchdowns in Johnson-Brock’s 34-10 win over Tri-County.

*Drew Bessey (WR) - Palmyra - I a 32-12 win over Johnson County Central, the fabulous Bessey had 4 pass receptions for 138 yards, 2 of which were 43 and 62 yard touchdown catches. Drew also ran the ball 5 times for 106 yards. 80 of those rushing yards came on a great looking touchdown dash.

Pokorny’s huge offensive game raises his season rushing total to 892 yards and 13 TDs. The Knights junior has also caught 10 passes for 305 yards and an additional 3 scores. And in all this action, Pokorny has fumbled not one time. Add all his offense together and you get 1,453 all-purpose yards thus far in 2017.

On defense, Pokorny has 76 tackles thus far, 14 tackles for losses, made 5 sacks and recovered a fumble.

Good grief, does this lad drive the bus to away games too?

Minnick is on the verge of cracking the 1000 yard mark again this season, having rushed for 975 yards in just six games this year.