York's heavy dose of Simon Otte too much for Aurora 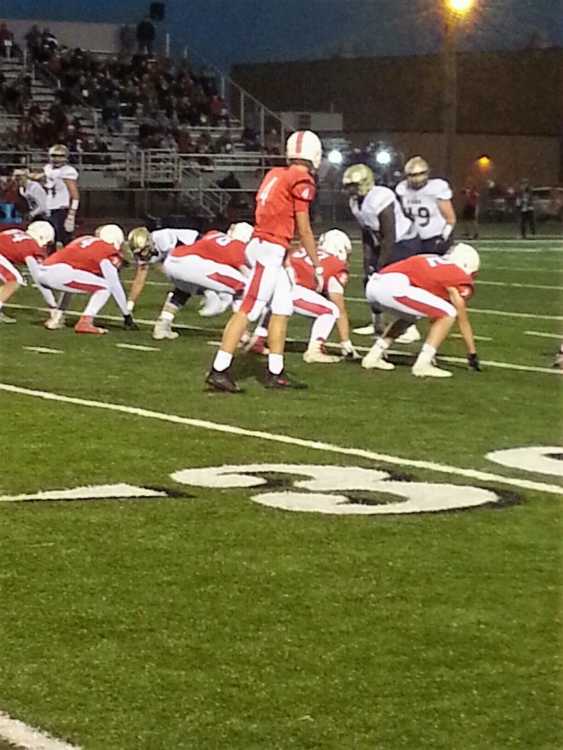 Aurora's offense prepares to run a play against the stingy York defense in a torrential rain storm Friday. The Dukes prevailed 51-20. *(photo by Bobby Mills)

And then the rains came…….by the bucket fulls. Then came Simon Otte, and more Simon Otte….and then some. The torrential, drenching rains never did stop and neither did Otte, who punished Aurora with 256 second half rushing yards, and a mind boggling 217 yards coming in the 3rd quarter alone.

The opening half was about as good as it gets for a rival game. Things got started with the defenses dominating and the punters being the biggest weapon for both teams. That song and dance didn’t last long after Aurora’s second punt.

York coach Glen Snodgrass decided it was time to roll out what I call their “Steamroller” formation. The York super coach puts his son Garrett back in the Wildcat formation and places three heavy duty lineman around young Snodgrass with just enough of an opening for him to receive the long center snap.

It took ten plays with a heavy dose of Garrett Snodgrass for York to draw first blood. The 217 pound junior skirted around his right side for an 18 yard touchdown. Jorre Luther drilled the PAT kick and the Dukes were up 7-0.

Aurora answered 4 plays later when Huskie quarterback Baylor Scheierman lofted a short pass to RB Cal Narber, who then turn on the jets for a 62 yard touchdown trip down the Aurora sidelines.

Nine seconds later, Dukes QB Nick Westkamp pulled an “if you can do it, so can I” play, hitting 195 pound junior Brady Danielson with a 47 yard scoring strike. 14-7 York.

Silence for most of the opening stanza, then BANG! So goes an Aurora/York football game.

York leaned on Simon Otte a little more in the 2nd quarter. After running for just 17 yards on 6 carries in the 1st quarter, the All-State utility player was up to 70 yards by halftime. Snodgrass, who gained 65 yards early out of the “Steamroller” set, blasted in from the one to give York a 21-12 lead to begin the 2nd quarter.

Aurora responded quickly with a 22 yard Scheierman to Jordan Stevenson scoring strike, but the skies opened up shortly after that touchdown and the scoreboard still showed York 21-20 Aurora at the halftime break.

Would the blocked PAT be the difference in the game? Little did we know what was cooking in the York locker room during the halfway break.

I cheated. I knew what was coming in the 3rd quarter……...Simon Otte. A whole bunch of Simon Otte.

York News-Times writer Steve Marik bailed me out with Otte’s 3rd stanza explosion. 21 carries for 217 yards. No, that’s not a misprint. With the rains increasing to torrential status, Glen Snodgrass apparently told his line to do their thing…...and it was a “thing” of beauty.

The holes opened just like the Aurora skies, and Simon weaved and slithered through the creases, showing why he may just be the finest all-around football player in all the vast lands of Nebraska.

Simon “Sez-Go” Otte carried the ball every single play of York’s 2nd half opening drive. All six plays…..63 yards worth, culminating with a 3 yard TD run.

Otte then hit the replay buttton, scoring on another 3 yard run, ripping off huge chunks of Huskie real-estate in the process. The chunks came in quanties of 6, 12, 6, 24 and 36 yards. Jorre Luther then nailed a 22 yard field goal, gaving the Dukes a commanding 37-20 lead entering the money quarter.

Otte added his third rushing touchdown of the stormy night with a 9 yard dash with 7:44 left in the final stanza. Lanky Reid Hoffman capped off the Dukes scoring with a great corner end zone catch of 19 yard TD pass from the arm of Nick Westkamp.

Meanwhile, the hounding York defense and the menacing rains kept Aurora scoreless the entire 2nd half. I actually saw Huskie QB Baylor Scheierman unofficially sacked twice in this football game. That, folks is a rare sight this season and a tribute to that splendid Aurora offensive line and Mr. Scheierman’s ability to avoid those situations.

In only recall seeing the Huskie junior being dropped in the backfield once prior to this game and that was on film. The lad truly is amazing.

Simon Otte led all ball carriers with a massive 327 yards on 35 carries. The jaw-dropping fact surrounding this deal is that Otte had missed 3 games and had only 5 practices before he returned for the McCook game where he promptly broke his older brother Jonah’s single game tackles record of 17 with his 19 stops against the Bison. That’s what kind of Athlete Simon Otte is.

Garrett Snodgrass added 119 yards on 19 carries for the Dukes, while Nick Westkamp and Snodgrass combined to go 6 of 11 passing for 120 yards passing and two TDs.

For the Huskies, the often hurried Baylor Scheierman completed 13 of his 30 wind and rain swept aerials for 171 yards and three TDs.

York improves their 2017 record to 6-1, with their only loss coming at the hands of undefeated and two time Class B champions,Elkhorn South That came in the 2017 season curtain raiser. Aurora falls to 5-2.

The Dukes hit the road to face Seward next week while Aurora trips to Grand Island to face rival Northwest.