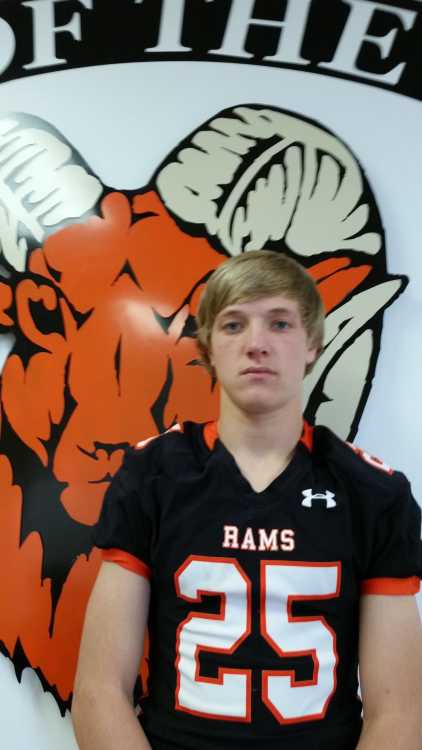 *Andrew Wendland (WR) - Crawford Rams - Set a State 8-Man Single Game Receiving Yards record in a loss to Mullen last Thursday. The Rams ended up on the losing side of that 86-46 score, but man did Crawford quarterback Blaine Flack and Wendland put on a pass/catch clinic in the 4 hour marathon.

Wendland, the 5-9, 155 junior, caught 17 passes for an 8-Man state record 365 yards and 3 TDs. That eclipses a record that stood the test of time since 1977 when Jim Smeal of Snyder had 348 receiving yards against Beemer. Matter of fact, QB Blaine Flack came within 16 yards of breaking the Single Game Passing Yards record in the Mullen loss.

Flack was 32 of 62 passing for 516 yards in the contest. The current record holder is Ben Hinrichs of Giltner, who blistered Exeter-Milligan for 532 passing yards in a 2014 game. By the way, Giltner lost that game 76-62, so don’t feel bad Blaine.

Spencer Jones (#30) would be a man to avoid on defense if possible, and junior Will Ackerman (#2) just flat out knows how to tackle.

And Andrew, I saw some pretty sweet moves on the reception that carried from the Crawford 29 to Mullen 5. You know the one. That cutback almost garnered you another TD.

Kaiser, the 6-3, 200 pound specimen, caught 9 passes in the game, good for 263 yards. One the five touchdowns was a beautiful 84 yard pass/catch dandy from Matt Masker to Kaiser.

For the year, Kaiser has an amazing 33 receptions for 894 yards and 11 TDs. Pretty safe in saying that may lead the state in that receiving yards category. When I saw Kaiser play against Garden Plain, Kansas, I knew a game like this was not far off.. What a perfect wide receiver build on this kid and a stride like a gazelle to go with it.

‘Spose Kaiser and Masker may have worked on this pass/catch thing just a few times this summer?

*Matt Masker (QB) - Kearney Catholic - Well, somebody had to throw those touchdown passes to Brett Kaiser and I know it wasn’t myself or Doug Duda. In that Mitchell game, Masker completed 15 of 28 throws for 360 yards and 6 TDs. The Stars needed all of Masker’s passing yards to turn away the Tigers and all-star RB Drake Gilliland.

Thus far, in his 29 game prep career at Kearney Catholic, Matt Masker is 438 of 680 passing (64%) for 6,443 yards with 79 TDs (16 INTs). At this pace, it is within the realm of possibility Masker could throw 100 touchdown passes before he calls it a career. Yes, Kearney Catholic would have to make a deep playoff run, but remember, this team was a C-1 semifinalist a year ago.

This gives Barnes, who rushed for 1,059 yards a year ago, an unofficial 1,111 yards and 17 touchdowns after only 6 games this season. Let me tell you, at 6-1, 210 pounds, this young man is solid college football material. He has the power, the sharp, one plant cuts, the fluid hips and elusiveness that makes him a home run threat every time he touches the football.

Jerome also has terrific vision and follows his blockers well, knowing just when to plant, accelerate and where to go when he does. Way, way underrated in many minds, but not here. Love this guy.

*Giovanni Guido (QB) - Millard West - The lightweight quarterback decided to jump on the state record bandwagon in the Wildcats 70-0 win over Omaha Bryan. Guido threw 15 times, completed 13 of those for 154 yards, but in the process tied a State Record by throwing 7 touchdown passes.

Guido now shares that mark with Bellevue West QB, Joe Dolincheck, who broke the existing record of six back on September 1st when the Thunderbirds thumped Bellevue East 56-0.

Guido is certainly not very big for a Class A quarterback (5-10, 175), but is a serious dual-threat man when it comes to causing problems for defenses. To date, the Wildcat signal caller has hit 53 of 73 passes for a ridiculous 72%, piling up 803 yards and 10 TDs with only one lonely interception. He has also rushed the ball 46 times for 464 yards (10.1) and an additional 10 TDs.

The only time I saw Giovanni held in check was at Seacrest Field when Lincoln East devised a terrific game plan to specifically stop him. The Spartans held Guido to 58 passing yards and 39 yards rushing. The bad news was that Brody Belt found the outside to his liking and went off for 228 yards and 4 TDs in the Wildcats 42-23 win.

*Brody Belt (RB) - Millard West - Speaking of Brody Belt, I never get tired of giving this kid props. In that romp over Omaha Bryan, the 170 pound Millard West star sprinted for 210 yards on just 12 touches and a couple of TD runs (34, 33 yards out), despite Guido’s seven touchdown passes.

Think of all the backs I salute in these Friday Nights Heroes blogs, especially in the Class A and B ranks. Brody Belt is among the lightest of them all. Milton Sargbah is no brute, but these smaller guys are playing in the big boy class and it really takes courage and a lion heart to compete and absorb the sometimes brutal hits dished out, especially in Class A.

For the season, Brody Belt has amassed 1,041 yards and hit paydirt 15 times. The talented senior has rushed for 2,771 career yards in basically a year and a half, and has been held under 100 yards only once this season and twice in 2016.

As I stated in an earlier blog, stay healthy the rest of the way and I’ll find a spot on my All-State team this year Brody. That’s a promise.

*Drew Bippes (QB) - Falls City Sacred Heart - Veteran junior QB hit 7 of 10 passes for 186 yards and four touchdowns in the Sacred Heart’s 61-8 win over Meridian. Bippes has connected on 25 of 37 passes this fall, good for 488 yards and 12 TDs. See a pattern here? That’s right, every other pass goes for a touchdown. That’s Doug Goltz football, folks.

This Irish team has so many weapons. In this Meridian game, Christian Harring carried the ball six times and scored 3 touchdowns. He also caught four Bippes passes for 120 yards and 2 more scores. Cha-Ching. Another Irish weapon is Tristan Keithley, who just happened to be on the receiving end of scoring passes covering 47 and 6 yards.

You going to be anywhere near Falls City Friday afternoon? Make sure you hit Jug Brown Stadium for the 8-Man Game of the Year when BDS faces Sacred Heart. Get here early.

Tiensvold has rushed for a modest 491 yards in 6 games for the 5-1 Cardinals, but he is about on par with 2016, when he finished with 741 yards. The thing to remember about Logan Tiensvold is that he is a constant threat to catch a pass out of that Chadron backfield.

We call Mr. Tiensvold a Dual-Threat back in this neck of the woods.

*Coach Tom Olson - Norfolk - The 20 year coach recorded his 100th career win in the Panthers 41-6 trouncing of Bellevue East. Brandon Hart hooked up with Zack James for scoring passes of 26 and 21 yards to help Norfolk to the historic win. Hart also scored on a 25 yard run in the Panther victory.

100 wins may seem a modest number for 20 year man, but I can tell you that Coach Tom Olson is a top notch coach who has had more than his share with costly injuries to key players over those 20 seasons. High props to Coach Olson.

*Dalton Tremayne (ATH), Logan Kingsbury (QB) - Ponca - Who can derail this Ponca football machine? One by one, some of the best C-2 teams in the Magic Circle have gone down to the Indians and a great deal of that success can be attributed to the multi-talented Tremayne and Logan Kingsbury.

The latest to bite the dust against Ponca was #8 Battle Creek. Tremayne carried only 8 times but ran for 102 yards and a TD (64 yards). Kingsbury only attempted 6 passes, but completed four, three of which went for touchdowns. That’s just the way Ponca does it.

This football team may the most opportunistic C-2 team in Northeast Nebraska (i.e. The Magic Circle), but boasts plenty of big time players and on both sides of the ball, where every single one of them seems like a “skill player.”

Ben Zach led the rushing onslaught with 159 yards on 8 carries and a score. Billy Higgins wasn’t far off that pace with 147 yards on 10 touches and 2 TDs (1, 5 yard runs). Fullback/All-State candidate Jake Archer chipped in 83 yards on 15 totes and scored on short plunges of 1 and 2 yards as the SkyHawks wore down the visiting Columbus defense.

Columbus super-star Michael Koch was held to 21 yards on 13 carries by the stout Skutt defense, although the senior QB did hit 8 of 14 passes for 192 yards and three touchdowns.

Coach Matt Turman’s team, who has reached the Class B finals 3 of the last 4 seasons, appears to have rebounded nicely from that 42-7 loss to Elkhorn South back on week two and the 24-7 Gretna setback two weeks ago.

Coach Turman also has a habit of making this Skutt Catholic football team a real force when the playoffs roll around.

Avery did the dirty work inside to set up Ehlers, who was only 11 of 21 for 60 yards. But, the veteran junior quarterback managed to convert three of those 11 completions into touchdowns in the hard fought 21-12 win.

After rushing for only 78 yards the first three games of the season, Avery has ripped off rushing totals of 112, 116 and 155 yards in the Broncos wins over Malcolm, Fillmore Central and St. Paul. Look for more of the same the rest of the way from this No. 1 Centennial bunch.

*Justin Davis (RB) - Hemingford - Holy crickets, do I like this kid. Davis, a 5-6, 140 pound junior and his fullback buddy, 6-2, 250 pound Kage Jesperson have quite the system worked out for the Bobcats.

The speedy, quick-footed Davis merely hides in Jesperson’s hulking shadow, follows him into the line or around the edge, then in a flash explodes past the defense before they can blink an eye. Worked like a charm in Hemingford’s 51-6 win over Sutherland last week.

In that victory over the Sailors, Justin Davis rambled for 219 yards on 19 totes and 5 touchdowns. The elusive, slippery junior scored from 45, 15, 21 and 18 yards away, and honestly, I don’t know how far the last TD run was. Better be truthful than stupid, I guess.

Davis has sprinted for 996 yards in only 5 games this season (11 TDs) but is no rookie at this rushing thing, having run for 705 yards as a sophomore.

……………….and lest we forget, this Hemingford team used to go under the nickname “Spudpickers” back in the day.