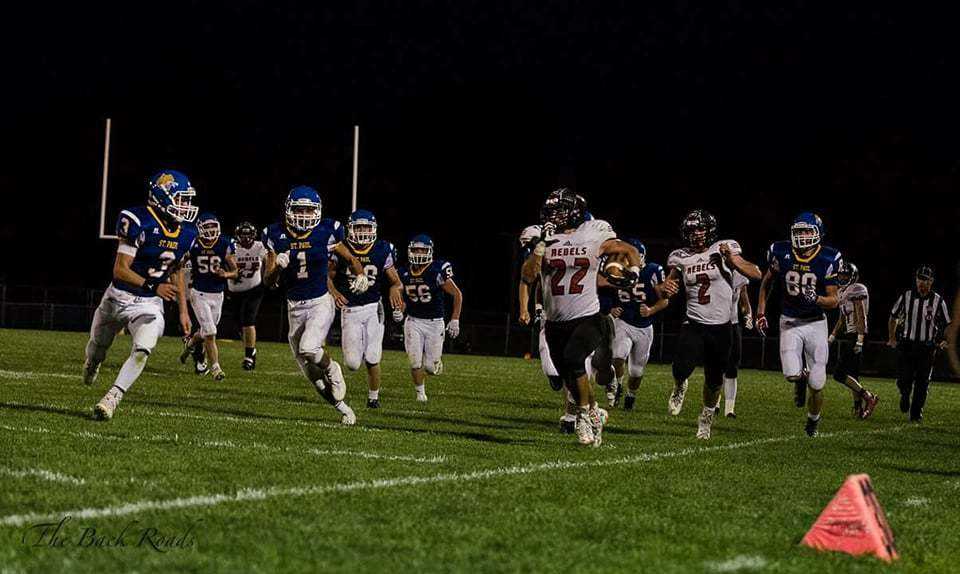 Tige Calleroz (RB) - Arcadia/Loup City - Now here is a football player. Punished St. Paul with 328 yards on 35 carries in the the Rebels 30-8 win last Friday. Calleroz hit the end zone from 1 and 12 yards out in the big win.

Thus far in 2017, Tige has 886 yards on just 106 touches for an 8.4 per carry average with 9 touchdowns. The only team to hold him under a 100 yards this season is a very good Valentine squad that has a stingy defense.

Last season Calleroz powered his way to 1,073 yards and 20 TDs for a 3-6 Arcadia/Loup City squad. I could see a real breakout 2017 season in store for this young man toward the end of the last. After watching high school for over 50 years, these type of pure football talents just jump out at you.

Tige Calleroz has barely scratched the surface with his versatility this season. The dude had nearly 1,600 all-purpose yards a year ago and that category includes rushing yards, passing yards, receiving yards, kick returns and punt returns and interception returns.

Calleroz is also a stellar defensive player on a team that thrives on stuffing the opponent’s offense. He already has 2 INTs this fal,l but possesses the ability to break open any game, whether it be on offense or defense, especially a big game.

If there is anyway possible to find a film clip of Tige Calleroz and his highlight reel run against a tough North Platte St. Pats defense, take a look. Probably the play of the year in Nebraska high school football thus far.

Tige Calleroz is the real deal folks, and many around the state think Arcadia/Loup City is flying under the Class C-2 radar in 2017, but if you check the current wld card point standings, you’ll know otherwise.

I’m telling you right now, this football team has the capability to make a deep playoff run in a very talented C-2 field.

I saw them play only once this season against Valentine and knew right then and there the Rebels were a fine football team……. and Mr. Calleroz is a huge part for their success. But remember these other Arcadia/Loup City football names as the season progresses even further; Macrae Maschka (QB/DB), Nolan Baker (WR/DB), Caden Kusek (RB/LB), Tucker Quinn (TE/MLG) and Tyson Troetter (OG/DE).

In case you missed it, super coach Doug Goltz and his Irish are now 4-0 and rated #1 in Class D-2 and are also on a collision course with D-2, No. 2 BDS when the two meet in the afternoon of October 6th at Jug Brown Stadium in Falls City.

*Garrett Snodgrass (ATH) - York - The junior was once again a jack-of-all-trades in the Dukes 20-7 win at McCook. Head coach Glenn Snodgrass used his 218 pound son Garrett at quarterback against the Bison, and along with the return of All-Stater Simon Otte, York was able to top McCook for the second straight season.

Snodgrass rushed for 122 yards on 18 carries on the warm night. He scored on a 4 yard touchdown run in the 1st quarter, then followed it up with a 20 yard TD strike to Brady Danielson right before halftime.

Garrett ended up 2 for 2 in the passing department for 48 yards, caught a pass for 6 yards and picked off a Cameryn Berry throw in the 2nd half. Simon Otte made a successful offensive return by rushing 16 times for 88 yards. Otte also recovered a McCook fumble on defense.

James Burks 5 game rushing total stands at 598 yards with 14 TDs. Great compliment to the Bulldogs deadly passing attack led by junior QB Tyler Chadwick. That junior deadeye has already thrown for 901 yards and 14 scores this season for NO.1 Omaha Burke.

With the Monarchs trailing 14-11, Ruth leaped up, tipped a Eli Vedral pass, then pulled it in for the interception on his way to the ground. Four plays after Kyle’s acrobatic INT, quarterback Gavin Rech ran it in from the one, giving Aquinas an 18-14 lead, a lead they never relinquished.

With Ruth helping to clear the way in that Aquinas O-Line, Kyle Petree finished the 39-14 Monarch victory with 136 yards on 19 touches and two TDs (4, 18 runs). Rech was just a yard back with 135 yards on 17 carries and 3 TDs. The Monarch QB would add another 1 yard scoring run, plus a 24 yard dash in the 1st stanza for his three scores

Once again, with Tony Smith’s defense performing the they always do, and Ron Mimick’s offense clicking with two All-State lineman, I once again repeat that Aquinas will be a difficult team to prevent from taking it all in C-1 this season. When this legendary football program has this many returning starters and the coaching staff doing their usual championship level of teaching, this well-oiled machine usually gets it done whether it be Class C-2 or C-1.

*Deshawn Bates (ATH) - Boys Town - There is not a coach in the state that likes to play Boys Town, and Deshawn Bates is a perfect illustration why that is.

Last year, Bates ran for 987 yards and 12 TDs and the dude didn’t even start until midway through the season. He also was a very dangerous receiver out of the Boys Town backfield in 2016, pulling in 35 aerials for 410 receiving yards and 6 more scores.

This year, Deshawn Bates is already at 771 yards rushing and 13 TDs. I did not hear how many receiving yards he had in the Ft. Calhoun game, but he already had 224 yards on 11 catches and two scores coming in.

*Colton Kelle (RB) - Beatrice - With Husker pledge Cam Jurgens sidelined with an injury, the 5-11, 190 pound junior stepped in with 157 yards on 30 carries and a TD in the Orangemen’s 20-14 overtime win over Omaha Roncalli.

It’s not the first time Kelle was leaned on by Beatrice coach Kevin Meyer. In a 38-21 loss to Elkhorn a few weeks back, Colton rambled for 139 yards on 25 totes and a score. For the year, Kelle has 359 rushing yards and 13 tackles from his linebacker slot.

*Christian Frederick (RB/ATH) - Syracuse - I can tell you right now this lad is not very big. Frederick is listed at 5-10, 135 pounds, but he plays the game like he is much bigger.

Frederick had a mere 128 rushing yards and a TD coming into last week’s matchup with Conestoga, but Christian changed that. He carried the football just 10 times, but bolted for 149 yards and hit the end zone on runs of 37, 5, 35, 5 and 13 yards in the Rockets 46-9 win over the Cougars.

Frederick, always a force from his outside LB slot, yeah Linebacker, made 7 tackles and returned a interception 35 yards for a Pick 6 in the Conestoga game. The game before, a 6-0 win over Raymond Central, the big hearted senior was in on a staggering 21 tackles.

For the year, Christian Frederick, all 135 or 140 pounds of him, has logged 53 tackles. And, one of these days I have a gut feeling that this young man will take a punt of kickoff to house.

*Cauy Pokorny (RB) - Sandhills-Thedford - 5-10, 185 pound junior has helped ease the sting of heavy graduation losses for the green clad Knights. In a wild and wooly 44-42 win over a pesky Brady team, Pokorny exploded for 243 yards on 39 grueling carries and three TDs. Cauy also worked his way into that Brady backfield for 4 tackles behind the line.

So get this. Through the first 5 Sandhills-Thedford games, with defenses keying on All-State back Riggin Anderson, Cauy Pokorny has seen his carries and yardage increase every single football contest.

Yes, the Knights are just 2-3, but Pokorny’s 535 yards and 7 scores have certainly given this team a well needed boost.

*T.J. Roe (QB/OLB) - Brady - This lad is quite a story. I’m not sure this 5-10, 150 pound sophomore wasn’t even supposed to play quarterback for the Eagles this season. Brady had senior Colton Lovitt returning at the position, but it appears that Lovitt was switched to wide receiver and Mr. Roe just stepped in and played the QB position like he’d been there for all his (short) career.

This is amazing because of the up and down season 2-3 Brady has been through thus far. Put yourself in the sophomore TJ Brady’s shoes and keep in mind he is playing a new position, probably the most demanding on the football field.

Opening night you get punched in the gut by a great Mullen team 76-20. Next game you clock Eustis-Farnam 67-32, then obliterate an overmanned SEM squad 87-12. The following week it’s another gut punch by Medicine Valley, 58-20, then you lose the 44-42 heartbreaker to Sandhills/Thedford.

Takes a tough dude to get through this. One week you’re the Penthouse, the next week, the Outhouse. Ahhh, but such is the world of 8-Man football. Keep on keepin’ on TJ Roe.

*Blake Westerby (LB) - GI Northwest - 5-10, 170 pound senior was a menace to Scottsbluff all evening in the Vikings 34-27 loss last Friday. Westerby had 13 tackles, but 3 of those were for losses behind the line.

The always active Westerby has logged 70 tackles thus far in 2017, recording double-digit stops the last 3 games, including a monster 7 solo, 15 assist performance against Columbus. He also has 3 sacks after five contests and currently leads Nebraska 11-Man football (according to MaxPreps) with those 70 stops.

Blake’s Grandpa, the late Wes Westerby, was a fine football coach in his day for Neligh and a great teacher of offensive line blocking and defensive tackling technique.

*Tad Muldenhauer (ATH) - Wilber-Clatonia - 5-8, 145 pound sophomore has stamped himself as one of Class C-2’s most dangerous return men. Last week in the Wolverines 42-0 whitewash of Humboldt-TRS, Muldenhauer took a kickoff 88 yards for a score and returned a punt 74 yards for a touchdown.

Earlier in the season, the sophomore took a punt 61 yards to the house against Sandy Creek. Nice weapon for Wilber-Clatonia considering the fact he has two receiving touchdowns too. The Wolverines need guys like Tad with all that graduated talent from their State Champion 2016 football team.