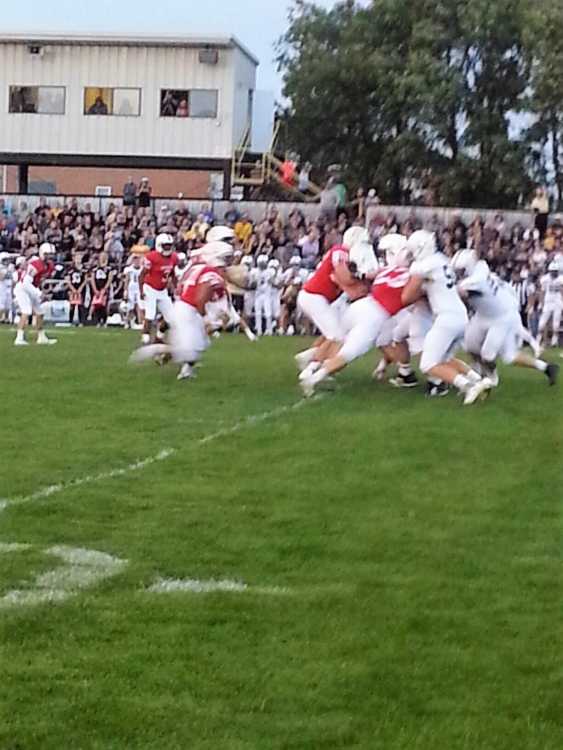 On an unusually warm and windy late September evening, the Bearcat defense picked of 1000 yard passing quarterback Carter Terry a total of four times while limiting the rifle-armed junior to a 9 of 25 passing night.

On offense, the surging offensive Scottsbluff line created enough space for shifty running, Chris Busby to bolt for 135 yards on 23 carries and two TDs on the night. But it was the Bearcats three touchdowns in a span of 5:37, stretching from late in the first quarter, to early in the second stanza, that made it appear that Scottsbluff may have the cushion they needed to win the game.

Northwest had other ideas.

It didn’t take long for Terry and the Vikings to thrill the Homecoming crowd. The Viking QB sent speedy 6-2, 180 pound Brady Glause on a fly pattern and promptly nailed him with a 52 yard scoring strike just 6 plays deep into the game.

The Bearcats Perris Magdaleno picked off Terry on the next GINW possession, setting up shop at the Vikings 40 yard line. The Northwest defense looked like it may hold when they forced a 4th and 2 at the 31.

But Busby ran to the 25 to gain the 1st down, and the very next play, fleet footed Keegan Reifschneider slipped by the Viking “D” to haul in a 25 yard TD pass from Noah Bruner.

The PAT kick was wide, but Scottsbluff was within 7-6.

Disaster struck Northwest the very next possession when Magdaleno pirated is 2nd Carter Terry aerial of the opening quarter, this one coming at the Viking 29.

Five plays later, Chris Busby literally dragged several GINW players into the end zone for a 6 yard score with 2:57 left in the 1st.

This time it really stung Northwest when the blazing junior WR took the pass 73 yards to the house, extending the Scottsbluff lead to 20-7, just 11 ticks deep into the 2nd quarter.

It took 3-1 Northwest only 3 plays to counter the long Bluffs TD reception. On one of those “the hand is quicker than the eye” plays, Carter Terry flicked a short screen pass to Brady Glause, who then sped by the Bearcat “D” for a sparkling 73 yard touchdown jaunt.

Just like that, the Vikings were back to within 20-13 and the score stood up until the halftime break.

Chris Busby gave Scottsbluff another two touchdown advantage when he scooted in for his second 10 yard scoring run with 7:51 left in the 3rd stanza. Northwest answered back just four minutes later, when Carter Terry plunged in from the one yard line for a TD.

The GINW defense then came alive, forcing a Scottsbluff punt that carried to the Vikings 32 yard line. It took only two plays for Carter Terry to connect with 6-5, 205 pound Riley Schliep for a long distance 68 yard touchdown.

With triple zeros showing on the 3rd quarter clock, the Vikings had set the 4th stage with by knotting things up at 27-27.

The biggest plays of this classic battle came with 7:45 left in the game.

Scottsbluff punter Cameron Geary literally buried Northwest deep in their own territory when the senior caught the wind and sailed his kick to the Vikings 2 yard line.

Just three plays later, Terry lofted an aerial downfield and 5-8 Pablo Cervantes leaped into the Grand Island night air like he was 6’8”, tipped the pass to himself, then raced 7 yards for what proved to be the winning score.

Eli De Los Santos booted the PAT though and Scottsbluff had a 34-27 lead, all they needed for the victory.

Northwest had their chances during the remaining 7 minutes of the money quarter, but the Bearcat pass rush kept the heat on Carter Terry to preserve the big road win.

Scottsbluff QB Noah Bruner hit only 4 of 10 passing attempts in the game for 100 yards, but two were good for scores (to Keegan Reifschneider). As previously mentioned, junior speedster Chris Busby rushed 23 times for 135 yards and two TDs. On that Scottsbluff defense, Perris Magdaleno pirated two Carter Terry passes, Pablo Cervantes had the Pick 6 and Paul Pandero added a 4th interception late in the game to thwart a Northwest drive.

Cervantes also was a monster plugging up the middle from his linebacker slot, while Nebraska football recruit, Garrett Nelson (only a junior) contributed extra misery to the Viking offense all night long.

For Northwest, who never threw in the towel, Carter Terry, despite his 4 picks, still threw for 313 yards, three scores and ran for a 3rd. I was also impressed by junior RB Adam Cooper, who churned for 92 yards on 29 carries right into the heart of that staunch Bearcat defense.

And of course, Brady Glause and Riley Schliep were outstanding on offense as well as the middle of that Viking defense, which made it tough sledding for the Bluffs runners throughout the evening.

Scottsbluff improves to 5-0 with the big win, but faces another road trip next Friday, this time to face 4-1 McCook, who dropped a decision to York tonight.

Northwest, who falls to 3-2 on the season, travels to Holdrege next Friday to face the Dusters in an early 5:00 PM start.