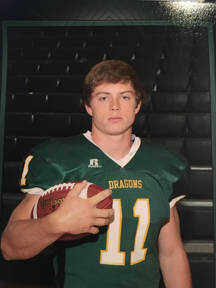 *Tanner Tierney (RB) - Gretna - Man, was this guy ready to step into a starting role in 2017. In Gretna’s 59-14 win over Omaha Roncalli, the 5-8, 175 pound Tierney ran for a career high 280 yards on 27 carries with 4 TDs. What makes this special is the fact the Dragons were only up on then undefeated Roncalli 24-14 at the half. Tanner had touchdown runs of 3 and 12 yards during that first half, but that Gretna offensive line fired it up in the third quarter and Tierney took off.

The senior standout broke loose for scoring runs of 6, 42 and 75 yards in that 3rd frame, giving the Dragons a sudden 52-14 advantage. The most impressive thing about that third quarter was Gretna’s opening 7 play, 71 yard scoring drive that saw Tanner Tierney carry every single play, culminated by his 6 yard touchdown run.

That boosts Tanner’s early season rushing total to 743 yards with 11 TDs. He is averaging 8.9 yards a pop, and considering Tierney ran for just 211 yards a year ago, we once again reiterate that this young man was ready to assume the Featured Back role at Gretna.

***Gretna Defense*** - I want you to think about something. In 4 games, the Gretna “D” has given up 481 total yards. That’s 120/game. The 1st Team Defense has allowed just 334 yards in those outings. That’s 83 yards a game. This is Class B friends, we’re not playing Pop Warner football here. This is big boy football. Players like Joey Johnson, Morgan Bartman and Cade Mueller (2-way starters) make this unit click.

Never, ever fail to include Dave Schrader’s Dragons when speaking about the Class B title race. Defense wins games.

Smith ran the ball a staggering 41 times for 409 yards and 5 touchdown runs covering 23, 10, 45, 62 and 65 yards. He had a pass reception for 11 yards. On defense, the sure tackling Smith recorded 12 solo stops plus 5 assisted tackles, two of which were for losses.

Despite Tri-County’s 0-4 start, Cooper Smith has compiled 783 rushing yards with 9 TDs and that includes a 7 carries for 6 yards game against brutal BDS defense. On the other side of the line of scrimmage, Cooper has 69 tackles (39 solos), 7 tackles for loss and has dished out a ton of Excedrin headaches for opposing ball carriers.

In his 30 game career, Smith has made already made 289 tackles and 31 of those were losses. Despite having All-Stater Colby Enz in the same backfield in 2016, Smith still managed to run for 618 yards. Just an incredibly strong kid.

*Keaton Van Housen (ATH) - High Plains Community - In that 62-48 win over Tri-County, the 5-10, 170 pound sophomore with royal football bloodlines gained 206 yards on just 13 totes. Van Housen ended the night with 4 long distance rushing touchdowns (63, 24, 65 and 42 yards) and was on the receiving end of 65, 31 yard scoring passes from classmate Dylan Soule.

All of the above in 3 games, may I remind you. Is this Craig or Paul Van Housen’s son?

*James Burks (RB) - Omaha Burke - Carried the ball only 6 times in the Bulldogs 64-7 win over Omaha South but turned 3 of those totes into touchdown runs of 28, 27 and 31 yards. Burks ended the short evening with 85 rushing yards and added a 52 yard kick return for a score for good measure.

The rock solid 5-9, 170 pound junior has already rushed for an even-steven 400 yards on just 48 carries through 4 games this season and I just love this young man’s running style. Burks just hits full throttle in a few strides and high steps like a wild stallion running full throttle, yet maintaining control. And strong, my lord, not to mention very fast with breakaway speed in the open field.

Besides all the above attributes, Burks was a terrific defensive safety last season for the Bulldogs I’m not certain he’s even playing defense this fall. So talented.

Better also mention Omaha Burke’s talented junior QB, Tyler Chadwick, the driver of the Bulldog offensive machine. In limited action, Tyler hit 5 of 6 throws for 111 yards. Two of those were TD catches by the outstanding Chris Hickman that covered 57 and 22 yards.

*Gabe Conant (RB) - Adams Central - For heaven sakes when is this dude going to peak? The 5-8, 140 pound sophomore just keeps running for more yards each game for Coach Shawn Mulligan’s Patriots. Opening night Conant rushes for a modest 58 yards on 16 carries vs. Kearney Catholic (understandable). The following week he gets the ball 27 times and goes for 144 yards against Milford-Dorchester.

And remember, reading through all these impressive statistics, the kid is still a 140 pound sophomore. I’m thinking there may bloodlines here, so I’ll get back on that one.

So, for the season, Lane has 646 rushing yards and 12 TDs, plus 4 pass receptions for 92 yards and 2 additional scores. And, life is good for those Mullen Broncos. Through 4 games, the closest any opponent has come to them is 46 points. Life is good indeed. I like that town and dearly love Mike Brown.

*Jacob Frenzen (RB) - Columbus Lakeview - Junior runner had a huge night as the Vikings took down the defending Class C-1 O’Neill Eagles 28-17. Frenzen rushed for 209 of Lakeviews 287 total rushing yards. Jacob also scored on a 41 yard dash to close out the Vikings scoring in the 3rd quarter.

If you recall, Jacob Frenzen rushed for 129 yards just the week before and with Lucas Thatcher, who went off for 309 yards on opening night, in that Lakeview backfield, Coach Kurt Frenzen’s offense is starting to look really difficult to stop.

Oh, just in case you were wondering, that Lakeview O-Line is beginning to click too. The result…….the Vikings get their first rating of the season at #10 in the Omaha World-Herald.

For the season, Jared Minnick now has 660 yards rushing (9 TDs) and has been in on 30 tackles for the blue and white. Minnick was a stud last year as a sophomore, chalking up a massive 1,329 yards rushing yards and 18 TDs.

All three played big roles in Ponca’s big 28-20 win over then undefeated Oakland-Craig. Matter of fact, Ponca is now 4-0 with the victory and moves ahead of Oakland-Craig in those C-2 ratings and is currently #4. A strange play in that win last Friday night gave Ponca a 21-20 lead.

Trailing 20-14 entering the 4th quarter, Ponca senior QB Logan Kingsbury lofted a pass from the 20 yard line, intended for his brother Carter. The younger Kingsbury and a Knights defender went up for the ball, both appearing to have possession as they tumbled to the ground. But somehow, Dalton Tremayne came up with the football in what proved to be a 20 yard TD reception. The Indians then hung on to win 28-20.

Tremayne finished the night with 85 yards rushing, but had that crucial 20 yard scoring reception plus an 18 yard rushing touchdown. Logan Kingsbury was huge all night and Connor Day came up with a huge interception following that strange Kingsbury to Tremayne touchdown, to thwart an Oakland-Craig drive.

This Ponca football team is pretty solid folks, but it certainly is difficult finding stats for that bunch. Thank goodness Randy Tremayne is a Facebook friend.

This is an awful good Osceola team to be at 1-3, but the combined record of their first four opponents is 11-2. So, for the season, Theis has rushed for 441 yards and 6 TDs, passed for 265 yards and 4 scores, leads the team in tackles with 38, and has an interception.

Caden has also kicked off 18 times for the Bulldogs, putting 12 of them into the opponent’s end zone for a touchback. He also does the punting, returns most of the kickoffs, some of the punt returns and teaches the team Karate on Saturdays…...well, maybe scratch that last one. The dude is multi-talented though.

Dalton Bohac to date, has an unofficial 513 yards passing on 42 of 62 accuracy. And East Butler still holds down that #1 rating in Class D-1.

*Coltin Rezabek (RB) - Wilber-Clatonia - Junior back scored 3 of the 4 touchdowns in the Wolverines 28-0 shutout win over Shelby/Rising City.