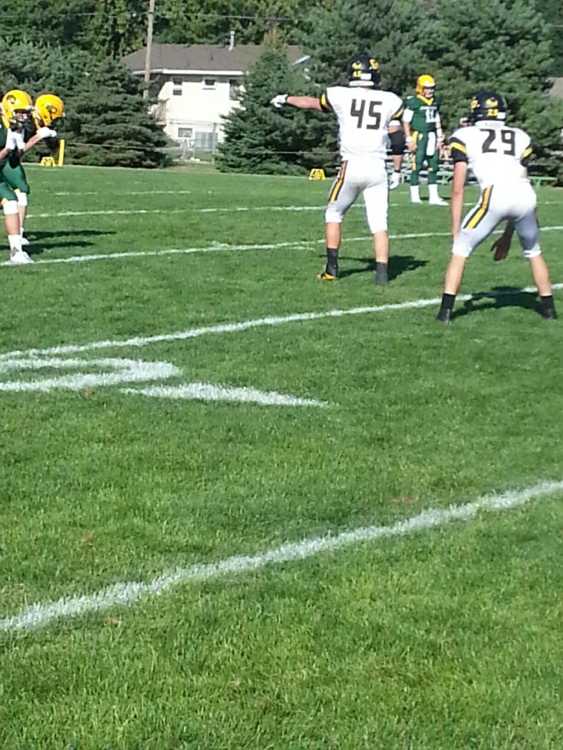 Garden Plain LB Nicholas Dooley (#45) points out the Kearney Catholic receiver he will be covering on the next play. The Owls outlasted the Stars 39-33 Saturday afternoon. *(photo by Bobby Mills)

Buoyed by an O-Line surge this guy hasn’t seen in half a dozen years, sophomore quarterback Matt Pauly followed the rugby scrum style wall set up by his front line to score two lethal 4th quarter touchdowns that gave his team a critical 12 point cushion.

Garden Plain would need that two touchdown lead to hold of record setting Stars QB Matt Masker, who is always capable of striking in a Kearney Catholic instant.

But a Matt Masker miracle comeback fell painfully short on this perfect sun kissed Saturday afternoon for football, as the Owls defense held off the Stars for a 39-33 road victory.

The Garden Plain win gave the Owls a two game sweep over Kearney Catholic, who lost 29-20 a year ago, to the southeast Kansas school, located about 20 miles east of Wichita. The game came about last season when the NSAA released the 2016/2017 football schedules and Kearney Catholic had only 8 games given to them. Rather than layoff a week, the Stars went through an extensive search and finally found Garden Plain, who agreed to the home/home series.

It didn’t take long for the Masker and the Stars to strike after Garden Plain won the toss then deferred. On the second play from scrimmage, the 6-2, 210 All-State Masker hit his favorite receiver Brett Kaiser, for a sparkling 69 yard touchdown.

Masker’s aerial was a simple short throw to his right side, but Kaiser turned in some highlight reel fancy footwork and was off the the races, shedding defenders on the way to the 69 yard score.

The Owls answered right back out of their slick full protection shotgun formation. Matt Pauly nailed multi-talented senior Connor Eastburn with a perfect 37 yard pass on the Owls second play from scrimmage, advancing the ball all the way to the Kearney Catholic 28 yard line.

Two plays later, that surging Garden Plain line opened a gaping hole for hard running 190 pound Nicholas Dooley, who rambled 18 yards for a score. 230 pound lineman Jonny Becker booted the PAT and the Owls had themselves a 7-6 lead with just a minute, fifty five seconds deep into the game.

Kearney Catholic looked like they might retake the lead on the ensuing possession, but the Owls defense caused three Matt Masker incompletions, forcing a Stars punt.

Garden Plain then did what they do best, pound the rock. The Owls drove 73 yards in 11 plays, culminating with an 8 yard scoring dash by senior Colin Zoglman. The Owls consumed four minutes, 34 seconds on the drive.

Both defenses then figured things out and it was a full quarter, time wise, before anymore points were put on the scoreboard.

Masker finally broke the scoreless spell when he found sophomore dandy Trey Colling for a 13 TD, 4:23 before halftime. Slender 140 pound freshman Spencer Hogeland coaxed the PAT kick over the crossbar and the two teams were all square at 13 after a half of Saturday afternoon high school football.

The Stars came out in the 3rd quarter just exactly like they did to open the game. After forcing a Garden Plain punt, Matt Masker, who had already hit 16 of his 21 opening half aerials for 218 big ones, orchestrated a fine 12 play, 75 yard drive. Linden Howe capped off the long drive when he snuck out of the Stars backfield and ran untouched 7 yards for the go ahead touchdown.

Hogeland’s PAT try looked like a dying quail, but had just enough oomph to hit the crossbar and go over, giving Kearney Catholic a 20-13 lead.

Disaster then struck the Stars, who may have had their second team kick-off unit on the field, when the speedy Matt Pauly fielded the ensuing kickoff in full stride, bolting 70 yards for a spectacular touchdown.

In a matter of 11 ticks, Garden Plain tied things again at 20 apiece.

Apparently unphased by the kick return touchdown, Kearney Catholic once again rode the golden arm of Matt Masker all the way downfield to the Owls 20 yard line in just 8 plays. The key play in the sequence was a powerful run by senior Jake Gappa that carried from the Stars 29 all the way to the Garden Plain 46.

Masker, who survived a jolting 6 yard sack by Connor Eastburn, pulled off a carbon copy to the previous Stars TD and it worked like a charm.

Once again Linden Howe took the slick handoff, snuck out of the backfield and glided 20 yards untouched for the score. Kearney Catholic 27, Garden Plain 20.

But what took place next may have broken the Stars back.

After the ensuing Kearney Catholic kickoff sailed out of bounds, Garden Plain had the ball on their own 35. Sophomore QB Matt Pauly went on a quick snap count, the Owls offensive line opened a Mack Truck sized opening and Pauly was off and running for a 65 yard TD.

Garden Plain applied another gut punch just 1:17 into the 4th and money quarter. Matt Masker had just connected with Brett Kaiser for strikes of 14 and 6 yards when he went to the well a third time. Owls defender Jared Becker timed Masker’s throw pass perfectly, stepped in front of the receiver and picked off Matt’s pass for the only INT of the contest.

Becker returned the pick to the Kearney Catholic 33 and one play later, Pauly followed the Owls rugby scrum line surge down the far sideline, found a slice of daylight and slithered 24 yards for the go ahead score. That put Garden Plain up 33-27 with 10:43 left.

Kearney Catholic needed to respond but the Garden Plain defense said NO.

The Owls then added a crippling touchdown with 5:51 left in the game following a lengthy drive that consumed nearly five minutes. The red hot Matt Pauly once again followed his surging line for a 12 yard TD and the Owls had a commanding 39-27 lead with 5:51 showing on the scoreboard.

Now Matt Masker would perform some magic in crunch time. On a 4th and 11 from the Stars 46 yard line, Masker scrambled, then lofted a pass. TWO Garden Plain defenders tipped the Masker throw before senior Alex O’Brien brought it in, taking it all the way to the Owls 6.

A block in the back moved the ball back to the Garden Plain 27, but Kearney Catholic was not to be denied. On a 3rd and 1 play at the Owls 4 yard line, running like a man possessed, Alex O’Brien took it in for the much needed touchdown. The PAT was wide left and the Stars were back in it, trailing 39-33 with 3:31 remaining in the game.

But Garden Plain simply rode the power packed running of Nicholas Dooley to bleed the clock and prevent any chance for a Kearney Catholic comeback.

Matt Masker ended his afternoon completing 32 of 45 passes for 374 yards, 2 TDs and an INT. Jake Gappa, playing on a bum ankle all day, led the Stars ground attack with 89 yards on just 7 totes.

Brett Kaiser was on the receiving end of 10 Matt Masker passes, good for sparkling 171 yards and a TD.

Garden Plain ran for 365 yards on the day, with spectacular sophomore Matt Pauly leading the charge with his 153 yards on 15 carries and 4 TDs. Big Nicholas Dooley added 109 yards on 19 touches and the early 18 yard TD run.

Pauly threw only 5 times all day, completing 3 of those for 58 yards. Connor Eastburn was outstanding for Coach Ken Dusenbury’s Garden Plain defense from start to finish.

Kearney Catholic falls to 3-1 on the season and will host Cozad next Friday for a Homecoming matchup. Garden Plain, Kansas improves to 3-0 on the season.