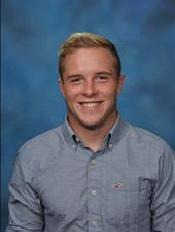 *Hunter Pilakowski - West Point-Beemer (FB/NG) - The 5-8, 170 pound fullback rushed for more yards last week than he did in all of 2016. In the Cadets 35-20 win over North Bend, Pilakowski carried the ball 27 times for 280 yards and a couple of TDs. He had 252 yards a year ago in nine games. On defense, he was double-teamed much of the night at nose and still recorded two tackles for losses.

You can’t name anything, right? That means Hunter Pilakowski, just plain and simple is football smart, has a heart as big as a lion and simply plays the game with unending passion. For the most part, you cannot coach that, it’s just there and any coach in Nebraska would take a dozen Hunter Pilakowski types.

So, for the season, West Point-Beemer is 2-0, Pilakowski already has 439 yards on just 42 carries and 4 TDs. That’s 10.5 yards a pop, man. And by the way, how do you weigh a buck 70 and be strong enough to play nose guard on defense and draw double teams a lot of the time?

The young man has my attention.

*Moses Bryant - Elkhorn South (Athlete) - The three time thousand yard rusher glided his way into the Class B record books by scoring career rushing touchdowns number 74 and 75 in the Storms 42-7 win over No. 3 Omaha Skutt. The always amazing Moses rambled for 201 yards on 20 touches and scored on TD journeys of 72 and 37 yards.

That gives Bryant 266 yards and 4 TDs after two games and swells his career rushing yardage to 4,321 yards. That means he averages 7.9 yards a carry every single time he touches the football. Thank you Elkhorn South O-Line and fullbacks. But Moses does create a lot of yardage beyond the line of scrimmage.

Here is what will happen if Moses Bryant stays healthy in 2017. He will become the state’s 41st five thousand yard career rusher, only the 18th in 11-Man football. Moses will rush for over a 1000 yards and become only the 4th running back ever to run for a 1000 yards each year in high school. Two of those four were 8-Man backs, Jacob Morrill of Creighton and Brandon Holtorf of Prague. The only other 11-Man back to turn the trick was my friend Mike Brower of Fillmore Central.

Keiser’s scoring runs covered 23, 64, 3, 3 and 69 yards. Last season as a freshman, Jacob rushed for 576 yards and 5 TDs. After just two games this season, the sensational sophomore is already at the 427 yard mark. That’s well ahead of senior all-state candidate Jackson Eickhoff’s 237 yards.

I would be worried if Cedar Catholic was on my schedule.

The one-two running tandem has worked well through two games for Coach Jeff Bellar while he works in sophomore Nate Brungardt at quarterback and a relatively new offensive line that has gelled pretty well thus far.

Through two games, Kautz, a two time 1000 yarder, has run for 399 yards on 34 carries (11.7/carry). Evans, the Illinois transfer, has 191 yards. Keep Kautz healthy and Nebraska’s fastest human will become the 5th ever four time 1000 yard rusher, right after Moses Bryant does it.

*Connor Barnett - Papillion LaVista (QB) - Yeah, well go ahead and key on Jerome Barnes, Papio South. Can’t say as I blame them, but when that happened junior Conner Barnett simply ran the football 15 times, exploded for 217 yards and 3 touchdowns in the Monarchs 49-42 win over rival Papillion LV South.

Star running back Jerome Barnes still got his yards though, 132 of them on 19 totes (2 TDs). Hey, Barnett didn’t just run the ball. He completed 12 of 16 passes for 89 yards and a score. Papio must have needed all those yards and scores to outlast Papio South in the offensive shootout by the looks of the final count.

The long striding Barnett broke TD runs of 53 and 56 yards and added a tackle shedding 39 yard run that was nearly went for another score. The 6-0, 175 junior has terrific breakaway speed for a quarterback and nice vision to go along with that speed.

So now, the Monarchs have a 1-2 running punch in Conner Barnett (283 yards) and the obvious Jerome Barnes (241 yards). Time to test it out this Friday against that young Millard North defense. Stay tuned.

*Evan Reinert - Oakland-Craig (QB) - Was a shining star in the Knights huge 27-24 overtime victory over powerful Battle Creek. Reinert, a 1000 yard passer from year ago, completed 11 of 24 tosses for 183 yards and a TD and rushed 20 times for 150 yards and three more scores. Evan’s rushing touchdowns covered 69 and 3 yards. The 69 yard shocker came only 41 ticks after the opening kickoff. Reinert’s touchdown pass was a 70 yard beauty to Kobe Benne only 19 seconds deep into the 2nd stanza.

It was also Evan Reinert that made the difference in overtime. The steady senior carried the ball for one yard, then 8 more, and finally one more yard for the winning touchdown. Big time player, big time game.

*Falls City Sacred Heart Offense - Nine different players scored touchdowns in the Irish 68-0 drubbing of Weeping Water. Drew Bippes scored on a 34 yard run, Sean Arnold got in from 8 yards out, Christian Harring scored from 50 yards away, Tristen Keithley caught a 26 yard scoring pass from Bippes, Jack Hoy scored from 12 yards out, Austin Sells broke a 42 yard run, and freshman Jack Feigener snuck in from the one yard line on offense.

The defense got in the act when Tanner Cromer pulled out a 21 yard Pick 6. Not to be outdone, Bauman had a 2 yard INT return for a score.

Hey…….when’s the last time Fremont was 2-0 to start a football season?

Tybor Smith - Meridian - At Meridian, when they get a good running back, they ride the dude…..and hard. After rushing for only 20 yards on 18 carries against a brutal Blue Hill defense, Smith toted the pigskin 47 times and responded with 343 yards and 5 touchdowns in the Battle of the Mustangs.

Tybor Smith did not just suddenly appear out of nowhere folks. The dude is an all-state caliber football player who suffered through a season full of injuries during his junior year while playing for Diller-Odell. He transferred to Meridian this season and the Mustangs couldn’t be happier the addition of Smith and 10 other returning starters back.

*Kevin Schroer - Lawrence-Nelson - All-State candidate rushed for 163 yards on just 7 carries in the Raiders 60-14 win over Exeter-Milligan. Schroer scored on runs of 62 and 53 yards in addition to catching 16 and 13 yard TD passes from junior Lane Heikkinen. Kevin Schroer is, without a doubt, one of 8-Man football’s most versatile players.

*Mason Lee - Wayne (RB) - Holy Usain Bolt ladies and gentlemen, is this kid fast or what? Boone Central/Newman Grove will attest to that one. In the Blue Devils 34-30 win over the undefeated Cardinals, the lightning fast Lee not only returned the opening kickoff 86 yards for a score, but caught the winning 35 yard TD pass from Beau Bowers with just 1:41 left in the game.

Throw in 74 and 24 yard scoring passes from QB Bowers and you have a Player-of-the Game in Mason Lee. Boone Central/NG is the 2nd big name team Wayne has knocked off the opening 2 weeks of this 2017 season. Week one it was Columbus Scotus that felt the bite of the Devils.

*Alex Horky - Twin Loup (RB) - Tore up Anselmo-Merna with 304 yards on only 16 carries in the Wolves 60-30 double-up victory over the Coyotes. Horky sprinted for scores on runs of 4, 35, 59, 44 and 57 yards. Horky is also one of the best tacklers in 8-Man football, as witnessed by his 9 solo stops, 21 assists (30 total tackles) in the game. Oh yeah, one other little tidbit on those numbers. They rarely make mistakes on the stat sheet up there in Sargent with the famous “Pit Spitter” doing those stat keeping honors. One the the best around at his trade.

*Cole Schaedel - Lincoln Lutheran (QB) - Backup quarterback stepped in to complete 18 of 29 passes for a giant 301 yards and 4 TDs in the Warriors 46-0 whitewashing of Johnson County Central. Lincoln Lutheran is now 2-0 with not a single point given up by their opportunistic defense.

What does a man have to do?