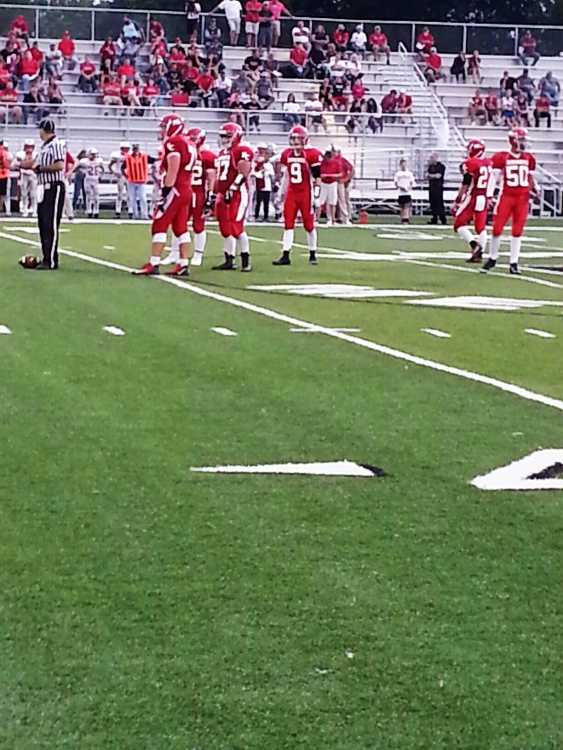 This Norfolk Catholic defense was outstanding during the win over Bishop Neumann in the 2017 opener for both teams.

Many football coaches expect some opening game miscues. Not Norfolk Catholic Head Coach Jeff Bellar. I was fortunate to be in the Knight’s locker room for Coach Bellar’s pre-game speech. It’s been on my bucket list for years and tonight I witnessed how a true Master and Championship program operates, first hand.

Bellar, who ranks 3rd amongst Nebraska prep football coaches with an incredible 336 career wins, warned his troops that they would have to play error-free football to beat Bishop Neumann. A combination of small mistakes could spell a defeat against the Cavaliers. Silly penalties, dropped passes, blown defensive assignments, failure to communicate.

“Catholic” must have listen closely to every word their soon-to-be legendary head coach said in that locker room prior to the start of the battle, because the Knights played nearly flawless football in their season opening 24-6 win over Bishop Neumann.

Operating with a 145 sophomore quarterback in Nate Brungardt, the Knights wasted no time reaching the end zone following the opening kick-off. It took only 4 plays and a minute ten seconds for Norfolk Catholic to put points on the board.

Two time 1000 yard rusher/State sprint champ, Dylan Kautz ripped of runs of 10 and 48 yards the first two scrimmage plays, advancing the ball to the Neumann 7 yard line. It then took only a couple of Evan Smith runs to hit paydirt. Smith is the junior, 1000 yard rushing transfer from Illinois

On the other side of the football, Norfolk Catholic’s defensive line play was outstanding all night, limiting the Neumann ground attack to just 113 yards. Senior NG Sam Kantu was a brutal force in that “D” line, along with 6-4, 270 pound All-State DT, Ethan Piper. Take away a 63 yard scoring pass from Cavalier sophomore Taylen Pospisil to speedy junior Jake Unger, and the defending C-1 runner-ups would have compiled only 121 yards of total offense.

Bishop Neumann was, however, hampered by an untimely injury to new quarterback Eli Vedral, who took over the reigns from older brother Noah, who is currently 2nd on the QB depth chart at Central Florida.

The younger Vedral suffered a broken bone in his throwing hand two weeks prior to tonight’s opener. It directly affected his ability to throw the football, as witnessed by his 2 interceptions in the game. But it was mostly the ferocious Catholic defense that kept Vedral and the Neumann offense in check all night.

The Knights led 17-0 at the halftime break, thanks to a 27 yard field goal by 210 pound FB Payton Love, and a sparking 17 yard touchdown sprint by the amazing Dylan Kautz.

Knights sophomore QB Nate Brungardt completed only 2 of 9 passes all evening, but his next-to last toss was a beauty. The slender Brungardt appeared to be on a rollout run to the Neumann side of the Veterans Memorial Park field when he suddenly lofted a perfect strike to fullback Payton Love, who streaked 32 yards for the score.

It was on the very next series that longtime veteran Neumann head coach Tim Turman slipped QB Taylen Pospisil into the game. It took only one quick play for the Cav sophomore to spot Jake Unger behind the Knights secondary for the 63 yard touchdown play.

As per Jeff Bellar’s pre-game instructions, the Knights made few mistakes. Only three penalties for 15 yards, none of which were opening game encroachment “sillies”. Only two fumbles, both of whom were quickly recovered and really, only one missed pass reception that may, or may not have been able to reach.

Meanwhile, Bishop Neumann suffered 7 penalties, 4 of which were encroachments and 3 that came in critical 3rd down situations. It all hurts.

Coach Bellar’s game plan was carried out in a very, businesslike, efficient fashion on this gorgeous night for football. His only criticism may have been the Knight’s inability to score in the Red Zone on some occasions, but give huge credit to a staunch Wahoo Neumann defensive line, led by senior All-Stater Evan Welsh and junior All-State prospect, Caden Johnson.

And, the conclusion. This current group of Norfolk Catholic football players listen intently to every word that comes from the lips of Jeff Bellar. And that is a frightening fact for future Knights opponents, knowing how many winning game plans this man has put together during his illustrious career.