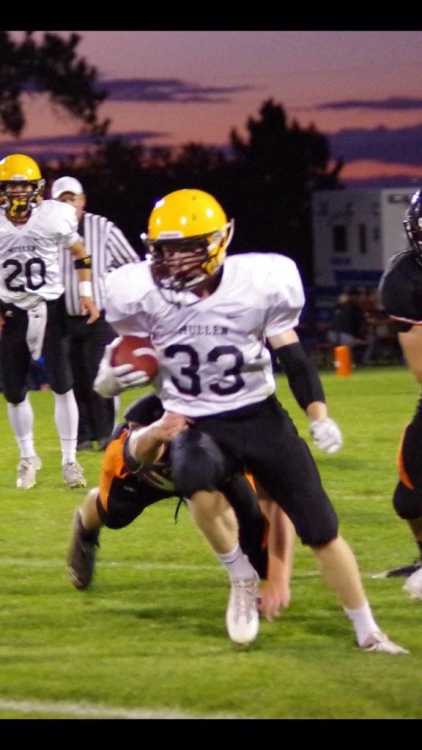 It’s high time we shine the light on some 8-Man football players. It is pure joy to view an 8-Man battle from the sidelines, friends. So much closer to the action with that narrower field. There are times when you need twinkle toes and quick feet to avoid being bowled over, but that just might be a kick, even at my age.

We’ll be a bit running back heavy in this installment, but Class D-1 and D-2 sport some brilliant talent at that position, plus many of them are first class players on defense.

Onward and upward we go.

*You would have a strong argument if you proclaimed Lane Edis as one of the best running backs in all of 8-Man football. 1,561 yards as a sophomore is mighty impressive in itself. And how about only catching 4 passes all year in 2016 and ALL going for TDs? But there’s more to Lane Edis than meets the eye.

Lane is one of the few Father/Son 1000 yard rushing duos in Nebraska Prep football history. Dad Wade Edis led Mullen to the 1990 Class D-1 football championship and in the process set the Single Season Rushing Record at Mullen with his 2,728 yards. What makes this record nearly unbelievable is the fact Steven Dent did not set that baby despite having a massive 7,903 career yards.

The elder Edis was really dominating for the Broncos during that ‘90 title run. Matter of fact, Wade ran for 339 yards on 48 carries in Mullen’s 44-34 championship win over Kenesaw. Wade’s final carry of his career was a clinching 62 yard TD gallop in the 4th quarter.

Lane Edis and his buddies won a D-1 basketball championship last March so they know how to win. We know Mullen graduated a ton of talent from that great 2016 senior class but junior-to-be Lane Edis has 6-3, 230 pound all-State candidate and human road grader Tell Spiehs back to open those holes for him this fall.

Lane is not a big bruiser at 160 pounds, but neither was Steven Dent. Let’s face it, those boys up there in Mullen are as tough as they come and before it’s all in the books for Lane Edis, you may be looking at Mullen’s next 5,000 yard career rusher if he stays healthy.

“Stays healthy?” Are you kidding me? Those Broncos players don’t miss football games. You gotta know that.

*I just posted it on Twitter and it’s worth repeating. Pound for pound, Daniel Libolt is the best 8-Man football player in the state. There may be bigger, faster and better players at any given skill position, but considering this guy’s size, grit and his ability to play anywhere on the football field, I think he is the best.

An All-State linebacker as a sophomore, Libolt helped lead his team to the D-2 Finals where CWC, with only 14 players dressed out, came within 2 points of defeating the mighty Humphrey St. Francis. He and QB Brenden Pelster were just mind-boggling in 2015 season.

Daniel Libolt does it all, man. In 30 games, Mr. Libolt has rushed for 2,328 yards and 35 TDs, caught 59 passes for 1,119 yards and 20 TDs on offense. On defense, he has piled up 114 solo tackles, plus 140 assists for 254 total tackles. He also made 9 interceptions, FOUR of which were Pick 6’s. Daniel also recovered 4 fumbles and returned 2 punts for touchdowns. Not much else you could ask for.

Check this out. Last season CWCE beat eventual D-1 Champion Burwell by a whopping 52-28 count on September 23rd. In that game, Libolt charged through the Longhorn line and stopped Burwell’s All-State RB, Tori Huffman right in his tracks. Huffman was a 190 pound beast that ran for over 2,000 yards last season folks. On another play, Libolt took the handoff, cut to the outside and set sail on a long run. During that journey, Libolt actually rolled a would be defender with a stiff arm and never broke stride. Not many pulled that off against a superior Burwell bunch a year ago.

Daniel Libolt has it all. Speed, power, that terrific, patented stiff-arm, a great 360 degree move to elude defenders and a stop/skip move that freezes defensive backs in their tracks.

The man is a 2017 All-State candidate on offense, defense, or in the “Athlete” category. Pure football player.

*Lots of hype surrounding this young man entering the 2017 season. Lane Deisley just makes opposing defenses quiver whenever he touches the football. Deisley is a big son-of-a-gun that lines up a multitude of places in Jon Coffey’s many clever offensive sets for the Bobcats.

Deisley, who transferred from Red Cloud at the end of 2015, sometimes lines up to take the direct snap in what looks like an inverted wishbone minus the fullback. In layman’s terms, Lane lines up 5 yards deep from the scrimmage line and has two halfbacks a couple of steps in front of him, one HB a step to his right, the other to his left. He also throws out of that formation. Hey, sometimes it’s not that pretty, but he sure gets the job done.

You DO NOT want Deisley to line up at fullback, trust me. With 4.7 speed and his helmet right near the quarterback’s rear end, the dude just explodes, reaching full throttle in a hurry, mowing down defenders with enough wheels to go the distance.

On defense, #27 can move around at linebacker or get down in a lineman’s stance and use that quick push-off to whisk into the opposing backfield in a rush.

Here’s the scary thing about Blue Hill his season. Lane Deisley isn’t the only weapon the Bobcats have. Far from it. They return 7 starters on each side of the ball and are coming off a 9-2 season that saw these boys drop a 29-27 quarterfinal heartbreaker to Twin Loup, a team that made it to Lincoln.

That’s all you need to know about Deisley and his Bobcat comrades. Pre-season Top 5 in D-2? Oh yeah.

*Yet another multi-talented football player from BDS. Look at his yards per catch from 2016. Not only 26 yards a pop but Norder came within an eyelash of making half of his 24 receptions good for touchdowns BDS has knack of making big plays at critical times in a football game, don’t they? And the trouble is, so many different players can pull it off, Caden Norder included.

It is difficult to figure out if Norder is primarily a wide receiver or a running back. He can come across the formation and take the handoff or jet downfield and get that desired one-on-one coverage. The dude is also deadly when he takes the direct snap in that same inverted Wishbone set that Blue Hill features Lane Deisley in. Norder is quick to hit that opening, but that BDS line blocking is so effective that Caden might have time to wave to his girlfriend before setting sail to the end zone.

Another big thing for this Bruning-Davenport-Shickley crew is co-coaches Mark Rotter and Chris Ardissono are offensive geniuses who know exactly how to get the most out of every single player in those offensive formations. They certainly know how to use Norder because he is nearly impossible to cover one on one on a fly pattern.

On defense, both Bob Jensen and I think Norder and Garrett Shardt are the best set of DBs in Class D-2 this fall. Both logged 82 tackles in 2016 and when Norder lays the wood on you, it stings, bro. Great pass defender as well and the guy can flat out fight off a blocker and make the tackle. A prime example of that latter statement is Caden fighting off big ole Bryant Jorn to make the stop in that October 7th regular season game with Falls City Sacred Heart down at Jug Brown Stadium in Falls City a year ago.

Schardt made all-state a year ago because of his additional 5 picks, but Norder could certainly have made that post-season honor and is a strong candidate to do so this Fall.

*Talk about a dual-threat player out of that Jaguars backfield, Brichacek would be that man. Nearly 800 yards rushing, plus 426 more as a receiver coming out of that offensive set, Jordan averaged big gains every single time he caught one of Dex Van Lengen’s passes.

Brichacek has wheels too, as witnessed by his deceptive 4.7 speed and may be one of the finest vision backs in D-1. Very patient runner who uses his blockers better than most. Loves to cut back against the grain and has the speed to break big runs and the ability to shed tacklers when he nears the pylon. Just like a slippery eel.

I’m not going to give away any of Big Mike Speirs secrets, but you certainly DO NOT want to see #23 line up at fullback.

Jordan is a very good cover man for that Howells-Dodge defense, good at batting away passes and a very sure tackler. Brichacek is also a dangerous return man for the Jags, having taken both a punt return (Elgin/Pope John) and a kick return (Clarkson-Leigh) to the house.

Pssst. Howells-Dodge has another powerful group of lineman on both sides of the ball, so with guys like Jordan Brichacek benefitting from that luxury, the Jags will be right in the thick of the Class D-1 title race.

*The Human Bowling Ball. Only thing about this 200 pound bowling ball is the fact he can fly in the open field. Brennan Bryan really doesn’t get the publicity he deserves, but Coach T J Nielsen knows how much this man means to the Bulldogs.

Both Brennan and Caden Theis, along with Garrett Fisher and Derek Voigt are 4-Year starters for Osceola. Very few 8-Man football teams can claim that. Big Bryan will take over the primary ball carrier duties in 2017, filling the shoes of the graduated Bulldog star and leader, Peyton Watts. Consider the fact Osceola pounds the daylights out of you with their running game, that’s big distinction for Brennan Bryan.

Powerful and way faster than you would think, Bryan loves to give defenders a piggyback ride during his runs…..sometime a trio of them. That Bulldog offensive run formation was often times so tight, defenses never knew Bryan took the direct snap from the center. Not certain if TJ will run that formation this fall, but man, was that effective.

Brennan will play DE when the Bulldogs don’t have the football. The dude has 153 career tackles so one can assume he knows the system inside and out. Coach Nielsen thinks this ball club and advance deeper into those D-2 playoffs than the 2nd round and after seeing them nearly knock off eventual state champion Falls City Sacred Heart, I’m on that bandwagon.

Expect a huge season for Bryan. He will not fly under the radar to some folks this fall.