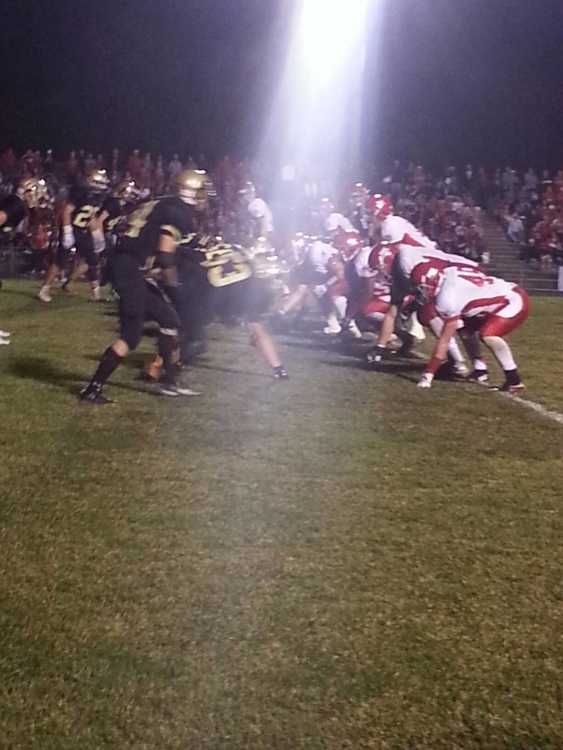 An eerie light from the heavens shines down during the Aquinas/Norfolk Catholic playoff game a year ago. *(photo by Bobby Mills)

Had to wait until the opening day of practice to feature these first two gentlemen. We also brag about a Class A quarterback, an electrifying Class C-1 running back, a magician that plays WR/DB, a standout C-2 nose guard who disrupts everyones offense and a Class A linebacker that lettered as a freshman.

*I can hear it now, “Are you crazy leading off your blog with a kid that caught only 15 passes in 2016?” If you must know the truth, I’m just knocked out about this youngster. The kid just floored me when I saw him on film and the World-Herald’s Mike Sautter (my former boss) has had good things to say about him too.

Apparently, we are not the only folks to be high on Omaha Burke Bulldog, Chris Hickman. The junior-to-be has received offers from Iowa State, Mississippi, and South Dakota State thus far. Yes, and here’s the deal on those 15 pass receptions. Seven went for touchdowns.

Have you ever watched an ostrich run? Those bad boys can hit 43 mph in a heartbeat and can measure up to 16 feet per stride. Hickman and his speed plus stride remind me of one of these amazing birds. Just unreal. The only drawback to any Division football school I can see at this point is the fact Hickman only weighs 200 pounds and that would be awful light for a Tight End at that level. No go, matter of fact. But fact is, it has been reported Hickman put on 30 pounds between last football season and now. So what would prevent him from adding another 30 over the next two or years?

The final thought about this dude is this. You can’t coach an athlete to be 6’6” and Chris Hickman possesses a wealth of tools, is not a bad blocker and can outjump anybody one on one going up for a ball. Keep a sharp eye on this young man in 2017. Shining star in the making.

*I’m assuming most of you know by know that Bryce Stai is former Husker All-American/Pittsburgh Steeler Brenden Stai’s son. And that weight above? May be higher than that now. At any rate, Bryce Stai already has 6 college football offers in hand. Ohio U, Western Michigan, Northern Iowa, South Dakota, South Dakota State and Youngstown State have all offered the Norris standout.

This lad can flat out play the game, especially at that DE slot. My goodness can he fight off blockers. Many have tried but the truth is, Stai is nearly impossible to block for over a few seconds. You’d better have a back like Moses Bryant or Stai’s teammate Austin Schultz hitting the hole quickly, or big Bryce will get to that ball carrier and eat ‘em for lunch.

You can see Dad has shown Bryce a few tricks of the trade, but don’t forget Norris has one of the best coaching staffs in the state too. It’s like a Who’s Who of former head coaches that have retired and come on board at Norris. Those guys know the game and a few tricks of their own.

On offense, Bryce Stai is one of the most feared blockers in the state. My lord can this dude destroy a defender. Stai has introduced many of his blocking victims faces to the turf. Also a terrific target on pass routes but with twin 1000 yard rushers a year ago, Norris didn’t need to rely on the aerial game too much. Bryce will catch a few more in 2017 and should be a Super-State candidate.

When Fred Petitio’s crew came out throwing in the opener against Omaha North a year ago, Cade Elwood’s running game was nearly non-existent. 4 yards on 6 carries non-existent. He threw for 139 yards but the Mustangs came up on the short end of a 41-21 score that night. The following Friday night it was back to vintage Freddy ball at Millard North.

Elwood ran for only 66 yards in that week two 52-42 win over tough Millard West, but after that, Cade hit full Mustang quarterback stride and the rest is history. 1,218 yards and 17 touchdowns worth.

That opening night passing game plan was not a bad idea considering Elwood was a rookie at QB but had two great receiving targets in Aaron Gerdes and Dylan Price, plus Andrew Wine. But sadly, as we all remember, both Gerdy and Price were lost for the season after game three. The only saving factor in that was Elwood was forced to develop quickly as an option quarterback…….and did so.

Cade Elwood is an outstanding runner with superb ball fakes and smooth, fluid moves in the open field. Not a speed burner at 4.68, but Elwood is powerful at the point of impact and can put the hurts on a defender. A 250 pound bench is pretty sweet for a QB.

Millard North graduated a very strong offensive line and returning all-stater Brandon Eastlack will be out until at least early October with an ACL injury I’m told, but Freddy just usually reloads, we know that. Plus, Cade has the brilliant Noah Mick back at fullback.

With Cade Elwood at the controls, you have to guess the Mustangs will be at the very least, a Top 5 preseason pick in Class A

*Without a doubt, Mitchell’s Drake Gilliland is one of the most electrifying backs in the state. What makes his 1,819 yards more mind boggling is the fact he toiled for a 3-6 football team a year ago and still averaged 202 yards a game, carrying the ball a workhorse like 243 times.

Honestly, Drake Gilliland is not really a super fancy runner. The kid just hits the crease in a hurry and get to the outside quickly. He had pretty decent blocking last season, but Gilliland’s line only had to hold those blocks for a moment and the guy was on his way. Same deal this season.

An :11.3 hundred man, Gilliland was still run down from behind on several occasions, but many were mostly touchdown saving tackles after long gains. The guy must be slippery as an eel to tackle because would be tacklers just seem to slide off his #6 jersey like water off a duck’s back.. Drake is so mobile and elusive, the only sure way to bring him to the ground is a tackle below the knees or around the ankles (see calf roping).

Shocking as it may seem, Drake Gilliland was held under a hundred yards rushing once in 2016. The bad news for defenses last year was that he exploded for over 300 yards against Kimball and Chadron. I like to talk about this kid’s talents by referring to the Kearney Catholic game where he ran for 178 yards on 39 carries. Nor bad against those Kearney Catholic boys.

Sure wish Mitchell was in Class C-2 this fall so Mitchell would have a better shot at the playoffs, but it won’t affect Gilliland. Get ready for another 1800+ rushing season for the Tiger Flash.

*The man with the Miracle Catch against Aquinas that saved the Eagles season a year ago. Nobody will ever forget that baby, but that certainly isn’t the first time Wyatt Liewer has made a grab like that one.

All-State wide receiver for the C-1 State Champion Eagles in 2016 and for my money, the lad could have made all-state on either side of the ball.

Liewer can get free in so any situations on offense it isn’t even funny, especially to opposing defenses. The 6-4 standout is also a demon in the open field and the multi-talented athlete doesn’t need much of an opening to be considered “open spaces” in his mind. One can also safely say the Wyatt Liewer is the finest cut back against the grain artist in 11-Man football.

Incredibly strong for his build, Liewer is a vicious downfield blocker on offense and has a nasty habit of separating the ball from would be receivers. So adept at surprising people with blindside blocks downfield on offense too. Wyatt has sprung QB Alex Thramer loose for a long gainer more than once and is also an ace at hand fighting with a defender if he has to hold a block longer.

Liewer rarely leaves the field for Brock Eichelberger up there in the land of the C-1 Kings. He does the kick-offs, PAT kicks and was 2 for 2 on field goals a year ago.

Wouldn’t surprise me if the Eagles were pre-season #1 in Class C-1 this time around. With Thramer back at QB and the returning WR combination of Wyatt Liewer and Justin Appleby, plus super coach Brock Eichelberger, O’Neill isn’t going away in 2017.

*No problem including Kocian with the big boys in this installment of Top 11-Man players. This young man is a top rate football player. How many nose guards have you run across recently that have been involved in 88 tackles? 16 stops (crunches) behind the line of scrimmage? That’s ballin’ man.

Good lord can this man fight off blocks. Against Centura last season, a squad with twin 1000 yard rushers, he was a one man wrecking crew, fighting off double-team line blocking part of the time. Ditto versus a good Centennial team, a game he made had 4 tackles for losses. I’ll bet Broncos QB Wyatt Ehlers still has nightmares about Kocian gobbling up the ball carrier a second after he handed the ball off.

And also ponder this. When is the last time you saw a nose guard get into the opposition’s backfield to make 16 tackles for losses?

Hunter Kocian also did a great job protecting last year protecting versatile QB Tanner Wroblewski when he had to throw, plus creating huge holes when Tanner had to take off on the run.

Hunter’s 5-9 frame also comes in handy on both sides of the ball when he uses his superb technique to beat blockers or make blocks on offense.

This dude is going to help the Wildcats make some serious noise in Class C-2 in 2017. And don’t kid yourself, Kocian could be All-State in Class B or C-1 as well.

*Omaha North opponents have to wonder if there are duplicate number 9’s on the field when the Vikings are on defense. Syriuz Pittman seems to be everywhere. Last season, the fleet-footed, sure tackling junior led the way in 11-Man football with a monster 102 assisted tackles and it was Pittman who usually made first contact. The dude also has a ton of fun as part of the kick-off team, often holding the ball for kicker Milton Sargbah if it’s windy, yet still getting downfield to make the tackle or simply blow up a blocker.

A rare freshman letterman at Omaha North, Pittman is lightning fast and as strong as they come in Class A. Dude benches 315, squats 400 pounds and has a 38” vertical. Okay, so he runs a 4.5 forty, once the ball carrier gets past Syriuz it’s all good…….nooooo. The man can cover a hundred meters in 11 flat and motor the 400 in around 52 even. He’ll run ya down, I tell you.

Pittman displayed moments of greatness in 2015 as a sophomore when Omaha North was having some early and mid-season struggles. He recorded 14 solo tackles, had 52 assists, and made 7 stops behind the line. And remember, this is big boy Class A/Omaha Metro football.

Coach Larry Martin has to be tickled pink he has his 2nd leading tackler back in 2017 in Syriuz Pittman.

Expect Pittman to be a Super-State selection this season for the Vikings.

I’m 68 years old and I still feel a high school kid when this night rolls around each year, tossing and turning, knowing that when the sun comes up the opening day of football practice will be upon us. Gotta love it.