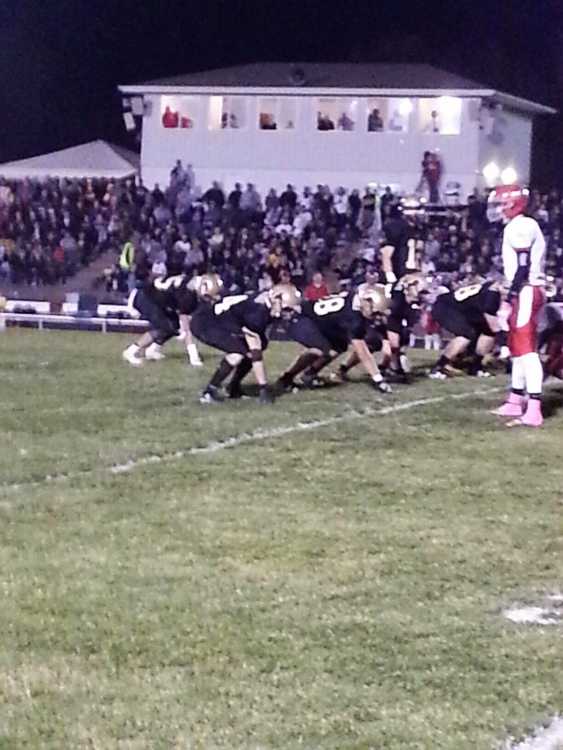 David City Aquinas Offensive line will be strong in in Class C-1 this fall. *(photo courtesy of Bobby Mills)

Today’s group of young football talent is simply amazing. On offense we have a junior quarterback who did a first rate job for a 5-4 Class A team, two very underrated running backs in my opinion, and an All-State lineman.

On the defensive side, I’d like to tell you about a DE that is a Husker commit, a young sophomore that has “3-time All-State” written all over him, and a ball hawking free safety that is all over the football field.

Dim the overheads and turn up the spots boys.

*Not only stepped into the split/starting QB role as a sophomore at a Class A school, but performed well above his years with his completion rate, passing yards and limited interceptions. Yes, 1,880 yards and split time with Jackson Mallory at quarterback. Whoa, Nellie.

This young man has A-1 form throwing the football and can elude trouble in an instant with his keen vision (self-survival?) Cedric Case is a superb rollout quarterback that can throw against his body when he quickly spots a receiver.

C’mon, let’s face it, Lincoln High has not had overwhelming success for a long, long time but last season Cedric Case lead the Links to its first winning season and playoff appearance since 2004. Heck of a milestone for a sophomore and he’ll be better in 2017 with two of his top targets (Zion Perry and CJ Jones) on hand.

Very slick with his ball fakes and roll out play action passes out of that Links Pistol set. Cedric has a rapid release similar to to Matt Masker of Kearney Catholic and like Masker, had a nice group of receivers a year ago.

Insert Cedric Case at a Bellevue West or Omaha Burke offense and he throws for over 3,000 yards. Not a running threat, but boy can this dude fling the football, and with accuracy to boot. Yeah, Case could throw pass throw a car wash and not get the ball wet. Any Class A coach would love to have number 10 at the controls for the next two seasons. Lucky Links.

*Jerome Barnes is one of those gems that just seemed to slide under the radar a year past. My radar, that is. After seeing this guy do his magic on film, I could kick myself for not watching him play at some point in time last season.

A strong performer on Papio’s JV team as a sophomore, Barnes stepped into the featured back role for the Monarchs in 2016, got himself adjusted that featured back role, then exploded for 823 yards the final 4 games of the season. The last two games, Jerome really strut his stuff, ripping off 534 yards and 10 touchdowns on just 38 touches.

Brace yourself for these stats. Barnes can bench 315 pounds and squat 400. His listed forty time of 4.68 may just have tricked defenders into thinking he was not that fast a year ago. Oh, how foolish would that have been. One long dash to the house erased that thought

You will not find too many backs in Nebraska more exciting to watch than #20 for Papio. Hits high gear in a hurry, struts like a 400 meter man and is the finest cut back against the grain runner in the state, bar none. Long run artist too.

Barnes had a 70 yard TD scamper against Lincoln NE and sparkling 69 yard TD reception against the mighty Millard North. The high stepping Monarch also had a 79 yard run against Fred Petitos squad, only to be dragged down on the Mustang one yard line.

Trust me on this one, Jerome Barnes is right at the top of the list of “Best RBs in Nebraska”. You will see in 2017. Amazing player and one of the best Randy Heubert has ever coached in all his glorious years. And that’s saying something. Not many better than coach Huebert.

*Does this young man ever leave the football field for Chad Fox there at Wahoo? Dylan Egr has hit paydirt from every conceivable place and position on the football field. Not only a 1000 yard rusher, but one of the most feared return men in all of 11-Man football. Speed, power, elusive moves, and a great blocker, Egr has all the tools a running back needs to be a standout. Also really gets that momentum geared up in an instant, lining up close to 9 and a half yards deep in that Wahoo backfield at times.

It does seem like Egr comes through in critical moments when the Warriors need it. 178 yards against Norfolk Catholic stands out in my mind and as stated earlier, the guy has put points on the board from everywhere. No. 6 had 13 rushing TDs, 2 scores on pass receptions, a 23 yard fumble return for a score against Ashland-Greenwood, a 74 yard kick-return vs. Louisville and TWO punt returns for touchdowns against North Bend last year. No Pick-6 Dylan? Just kidding.

On defense, Egr was all over the gridiron for that Warrior “D”. Very good cover man from his strong safety position and very adept at zooming up in a rush to make the tackle on a run with his superb tackling technique.

No statistics needed when you play for Ron Mimick at Aquinas. Team football baby. If you look at offense and watch Kyle Ruth, it’s all a potential All-State offensive lineman needs to know. May be the best blocking O-Lineman in C-1. Textbook baby.

You know what kind of cross field movement the Monarchs have on offense with that marvelous Wing-T formation, and to be successful, you must have quick-footed lineman that can pull and execute their blocks the entire game. That bunch is in peak physical condition there in the land of Ron Mimick and Tony Smith and Kyle Ruth may be the Poster Man (not child) for that part of the game.

Not a ton more you need to know about Mr. Ruth except for the fact Aquinas loves to grind and pound out the rock on offense, which can mean long periods of time on the football field for an offensive lineman if one of the quick Monarchs doesn’t break a long run. That’s why Kyle Ruth was an easy selection for Class C-1 All-State Offensive Line a year ago and may very well go down as one of the finest O-Line players during the Ron Mimick era at Aquinas.

*What can you say about Garrett Nelson? The Huskers offered the Scottsbluff junior after his Friday Night Lights showing earlier this summer and he accepted. I saw him play early in the season, thought he was a pretty salty player, but the guy came on like gangbusters later in the year and just continues to improve as we speak.

To say Nelson plays with high emotion may be an understatement. The son of a former 2-time All-American Husker wrestler, Garrett is another one of those defensive ends that lines up slanted in toward the QB. I’ve seen many great ones that do that thing and it certainly seems to give this youngster an edge when the play flows his way. His opening burst after the offensive snap is really impressive, plus his ability to fight off blockers, sometimes a double-team is such a plus.

Nelson’s bench press is 275, but the kid plays like it’s 325. The forty time of 5.2 doesn’t hurt matters any either. The lad also lays some pretty heavy wood when he greets the ball carrier and to think he has two full seasons ahead of him is downright frightening.

Don’t kid yourself, Garrett Nelson is much better football player than you think. Nebraska thought so. Good enough for me.

*While Garrett Nelson was ripping things up as a sophomore out West, freshman Rex Becker was making his presence known in the Magic Circle in northeast Nebraska up at Hartington Cedar Catholic. This young man isn’t even close to being as strong as he’s going to get, yet he made 29 tackles, 7 of which were in the opponent's backfield.

Cedar has cranked out some famous lineman over the years (see Russ Hochstein), and Becker could be in that category before it’s all in the books. Really fights off blocks well and has the ability to track down the ball carrier in no time at all.

Becker is a bang-up blocker in that Cedar Catholic offensive line too, but the kid works alongside of two of Class C-2’s best O-lineman in Quinn Paulsen and Jacob Haahr. In fact, if I could turn back the clock (a long ways), suit up and run behind a line, it would be the current HCC crew. They’re that good.

Coach Chad Cattau, one of the very best there is, has to be tickled pink that Rex Becker is just getting started for him. I would think the only growing concern at this point would be if Mr. and Mrs. Becker can afford to keep supplying that quarter of beef Rex consumes each week……………….just kidding.

Mr. Cast certainly made his mark in that York defensive backfield a year ago, didn’t he? Good enough to be named All-State Class B. Oh, don’t be fooled by his weight because Tyler can pack a solid Dukes punch at the point of impact and that 6-3 frame allows him the cover a ton of ground. At times last year it looked like Cast came from nowhere to pirate a pass.

His 8 interceptions led Class B in 2016 and Cast may be the state leader in 11-Man football coming back this fall. Obviously a great cover man, but also can sprint up to that offensive backfield after he smells the run. What I like about Cast is his football IQ. Just smarter than a whip out there.

You wonder if Cast will get a ton of opportunities to haul in some pass receptions on offense from QB Nick Westkamp with receivers like Garrett Snodgrass, Brady Danielson, and Simon Otte out of the backfield. All I can say is, you’d better be aware of #80 sneaking out of that Duke offensive formation and breaking free for a long TD catch. Gonna happen, I’ll bet.

Sure-fire bet for another All-State season is Tyler Cast.

Reetz did not have to throw much with a pair of 1000 yard runners in that Norris backfield and Knott was a better runner than passer a year ago for the Rams. Knott ran for 733 yards and 4 scores, but had more interceptions than touchdowns and a 38% completion rate. I’m thinking Jake Knott may competing for a RB spot in Guy Rosenberg’s offense.

Never hurts to have depth at that quarterback position though. Elkhorn is looking like a strong bet to become a 3-Peat Champion in Class B. Skutt, McCook and York may disagree on that one.