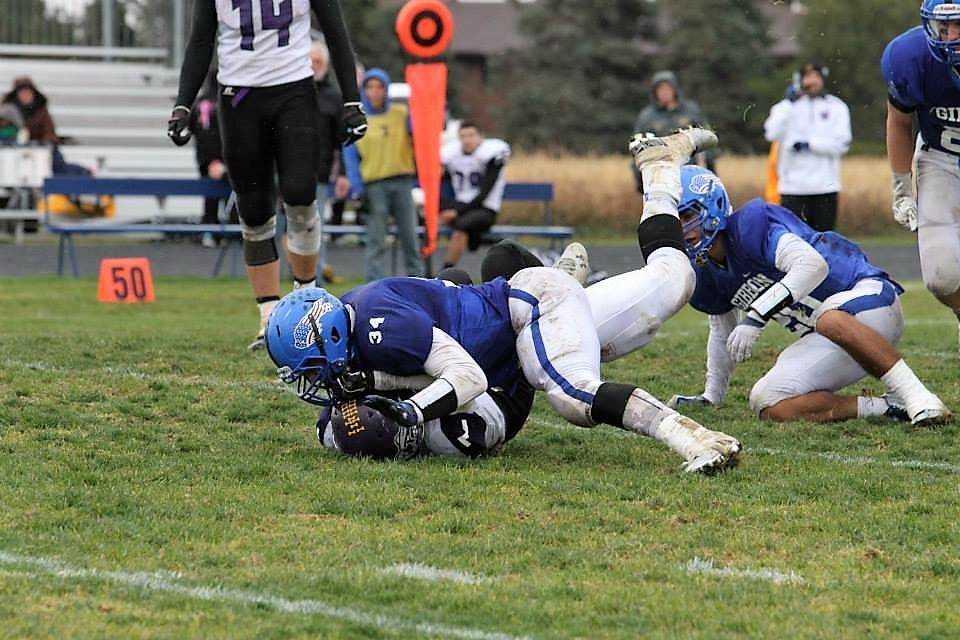 As Steve Harvey would say “man have we got a good show for you today.” So, we salute a couple of 1000 yard rushers, the top receiver in Class C-2 and a overpowering Class A lineman on offense.

On the other side of the ball, I want to tell you about a dominating D-Lineman, two of the best linebackers on the gridiron this fall and a Defensive back that “ain’t” afraid of nobody.

What a career Jacob Johnson has put together for the Jeffs. Started as a freshman and has been a force on both sides of the ball ever since. When Jacob rushed for 721 yards as a 9th grader, I kept my eyes glued to this young man. Matter of fact, Johnson rushed for 66 yards and 4 touchdowns the very first varsity game of his life as a freshman.

Already a two-time 1000 yard rusher (3,256 career), Johnson had only a little over 7 games to reach the magic number a year ago. Jacob went down in the Falls City game in Week 3 and missed the Auburn contest altogether the following week. The kid just gutted it out in a 54-34 playoff loss to Boys Town to reach the thousand yard plateau.

Jacob Johnson’s running style? He’s a slider and glider that just loves to keep slipping past defenders horizontally across the field until he reaches the outside. It’s not like cutting back against the grain because he’s not in space yet. The guy’s reactions are just that lightning quick and 4.5 speed plus a 250 bench/405 squat doesn’t hurt things any.

Johnson is also a big time threat as a pass receiver out of the backfield and lest we forget, Jacob has recorded 199 career tackles on defense and loves to shake a few screws loose when he greets the man with the football.

The Jeffs should be good this fall with Jacob Johnson and field general Adam Wasserman leading the charge……..and how about those new digs? Helmets are sweet too.

Clark was a Class C-2 All-State selection at defensive back last season and won that gig by doing an outstanding job patrolling that secondary for the Panthers, who allowed only 121 points in 10 games.

Easton Clark isn’t as big as some would think and doesn’t own a gaudy bench press or blinding speed, but the kid just has that pure football IQ and big heart that every coach just loves to see. The dude rarely misses a tackle and defends the pass as well as anyone in C-2. The Hershey star can also jet from his safety position in the blink of a Mark Crow eye and shut down the play.

On offense, Easton Clark is one of those backs that is able to suspend or freeze frame his carry long enough to make defenders slide by and look foolish. He made a whole ton of tacklers miss a year ago. Also one of the most feared punt returners in Class C-2.

I was convinced this young man was the real deal as a runner when he torched Doniphan-Trumbull’s top notch defense for a fat 242 yards on 30 carries and 2 TDs during a Hershey 28-14 victory last September 9th…..IN Doniphan. Not many have done that in recent years to that bunch.

Easton Clark is a pure football guy…….like Hershey greats Mark Crow and Shane Swanson. Remember them? Clark is in that august company.

Seagren was as good as it gets at Wide Receiver in Class C-2. Perfect size for a wideout and way above average speed. Like all the greats who play the position, Seagren owns that ability to get open in space and beat the pants off you in single coverage situations. Very difficult to bring down after the catch too.

Garrett is one of those players that can do the freeze frame thing and make defenders overrun the tackle. Matter of fact, he is the Thee Man in C-2 for that distinction. So many would be tacklers simply slip by as #1 just waits, then lets another slide by, and sometimes a 3rd defender, then off to the end zone with the jets kicked in.

I saw this kid play in the Class C-2 finals against Aquinas 2 years ago, and Tony Smith’s Monarch defense was well aware of Seagren’s 601 receiving yards as a sophomore. Yes, that’s right, the Oakland-Craig dandy All-Stater already has 1,376 receiving yards and 16 TDs in just two seasons.

Hey, keep in mind Garrett Seagren amassed those 775 receiving yards in 9 games last year. Oakland-Craig went 9-2. Also keep this in mind. The Knights return 8 offensive starters and 7 on defense and are C-2 Top 10 material, possibly higher. And you know what else? O/C returns their starting quarterback, Evan Reinert, a dual-threat type player that dearly loves to deliver the ball via the airwaves to Garrett Seagren.

Could we see a thousand yard receiving season for Mr. Seagren?

Aahhh, you don’t need any stats for this guy. Just know that he’s dished out more pancakes than that IHOP right off of West Center Road in Wright Plaza. Old Nate also holds an offensive block longer than anyone I’ve seen in awhile. Wait, “holds” is an inappropriate word in this situation although big Nate may have gotten away with a few in his day. Oh what the heck, it’s part of the game and besides it’s more fun than fox has in a henhouse when the dogs are asleep.

Herrera was talented enough to be named 2nd Team All-Metro Offensive Line. Not an easy task at all for an underclassman dude. But when you have the ability to pancake a defender, hold that block long enough for the ball carrier to get by and hold the distinction of being one of the best pulling guards in Omaha, someone is bound to notice. Yeah, mainly Defensive Coordinators.

The real thing I appreciate about this guy is the fact he just continues to battle with his defender until the play is over and then some. What whistle, sir? And Herrera is a great downfield blocker who is always on the lookout for another defensive player to punish. Gotta love that.

This is one huge human being folks. Nearly impossible to block, Williford runs a 5.2 forty and is drawn to quarterbacks like a horsefly is to shoofly pie. And lord knows if he catches up, your face mask will introduced to the turf.

Williford’s motor is always in high gear and the big fella has also been known to strip the ball from the RB or QB a time or two. And if you presume he is a little slow getting off the ball, you are in for a long evening of playing catch up or explaining to your coach why number 47 just blew by you and destroyed your quarterback.

Should be one of many returning bright spots for Larry Martin’s Omaha North team in 2017. A lot to like about Alex Williford, especially the quick feet and imposing figure. Even looks mean behind that facemask.

Find me a better linebacker in Class C-2. Wyatt Kee has been a starter at that middle linebacker position since his freshman season, was All-State a year ago, and has recorded unbelievable 366 tackles during that 3 year span. 212 of those were solo stops. No, you read that correctly.

Kee is the poster child of Gibbon football and super head coach Mark McLaughlin, a disciple of the great Mark Wortman of Elkhorn. The man’s motor is always revving at a gazillion rpms and with eyes like an eagle it’s difficult for anyone carrying a football to escape Kee’s radar.

Wyatt Kee is so efficient at his MLB position, he has made double-digit tackles in 21 of the 30 games he has played in. In some of those outings he recorded 8 or 9 and just missed. Last season, a 2-7 rebuilding year for the Buffaloes, the Gibbon standout had only one contest he failed to make at least 10 tackles. In a 42-28 loss to a good Southern Valley squad, Kee raised all kinds of ruckus with the Eagles, posting 16 solo tackles…...Sixteen.

On offense, Wyatt Kee is a solid target from his tight end position, hauling in 24 aerials for 357 yards and 4 scores last season. I could see those numbers going up in 2017 and with 1,312 yard back Jacob Tracy in the backfield and Kee at TE, the Buffaloes have a couple of potent offensive weapons.

I foresee another All-State year for Wyatt Kee, who plays the game how it is supposed to be played no matter what his team’s record reads. It’s a safe bet that Mark McLaughlin would take a dozen more Wyatt Kees on that Gibbon roster.

I can tell you, without reservation, you will hear this young man’s name repeatedly in 2017. Multi-talented athlete who also stands out on the hardwood for Gretna. Played long side of one of the Dragons best linebackers ever a year ago, Grant Bruner and absorbed a ton of football knowledge in the process.

The lad has some impressive bloodlines, folks. All you need to know is that his mother was a Makovicka. Yes, that Makovica/East Butler/Nebraska Cornhuskers Makovica crew. I knew Johnson was a serious guy when I did the PA for a Gretna basketball game and I asked if he wanted me introduce as “Joey” Johnson. Nope. It’s “Joseph” sir. Got it.

Man, can Joseph Johnson ever fight off a block to make the tackle. And you just have to appreciate his tackling technique. Just like the rodeo calf roping cowboys do it, wrap up the legs, pull those bad boys together and down they go. And really, Johnson has a relatively calm demeanor, but if that Dragon coaching staff can instill a little mean streak in #31 before game time in 2017, look out.

Don’t forget about offense either because Joseph is a sure-handed tight end who was really targeted in Gretna’s final three games of the 2016 season against Elkhorn South, Omaha Roncalli and Skutt. 9 times and a 130 yards worth. Not bad for a tight end. Plus, this guy can not only get up high for the reception but win the battle for the ball, and flash some good wheels after the catch.

Who has the courage to play at the Class A level even though they weigh only 140 pounds? Vernon Johnson, that’s who. The lionhearted junior was a shining star in that Omaha North defensive backfield despite missing 4 full games.

Even with the four game absence in 2016, Vernon Johnson still made 30 tackles, pirated 6 passes (one a 52 yard Pick 6 against Lincoln Southwest) and batted another 8 aerials away. The guy always gave away inches and pounds as a cornerback, yet was 1st Team All-Metro and barely missed All-State status. Incredible.

If this gentleman isn’t the best defensive pass route cover man in Class A he has to be close. I wish his vertical was available because he gets airborne with his well-timed jumps and rarely loses the battle. I would be shocked if Johnson allowed many receivers to get by him for a score in 2016. Really surprised. And 6 interceptions in Class A? Top notch, man.

I’ve also wondered what kind of threat Vernon Johnson would be as a wide receiver in that Viking offense with all that star power in the backfield? Man, could this little dude sneak past the defense or what?

Poster boy for all prep football players who think they are too small to play big boy football. Vernon Johnson is The Man.