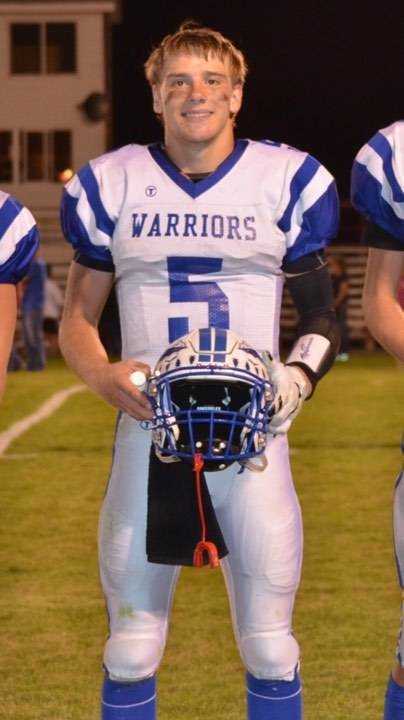 Today we fire up the spotlights to tell you about two great 8-Man quarterbacks, a terrific, do-it-all Athlete, a pair of linebackers on the defensive side of the ball, along with an All-State DB who is also a nifty quarterback.

One of 8-Man football’s most electrifying players and a Dual-Threat QB for sure. In just 2 years, Gentry Anderson has accumulated 3,950 total yards for Arapahoe and strikes fear and indecision into the hearts of defenders who must choose between coming up to make the tackle or dropping back into pass coverage.

Such is the immeasurable value of the dual-threat quarterback.

Anderson looks like an 11 flat hundred meter dash man on the gridiron but is not. It’s called football speed folks. Plus, the lad has tons of football smarts and has for the most part, avoided injuries while basically never leaving the field during a game. Good fortune? Nope, just intelligent decisions on the gridiron.

Gentry is a smooth runner with subtle cuts plus crafty slips and slides that net him big gains. Can also stop on a dime behind the scrimmage line and find an open target downfield.

Anderson has his favorite target back this fall in classmate Yordi Gutierrez, who hauled in half of Gentry’s passes for 644 yards and 13 TDs. Expect big things from Mr. Anderson in 2017. Can you say 1000 yard rusher/1000 yard passer?

Mr. Bohac falls into the magical category of Dual-Threat quarterback. And considering the ungodly, brutal schedule East Butler faced a year ago, this is nothing short of amazing.

East Butler dudes have a long standing tradition of being tough (see Makovicka boys) so flourishing despite the rigid schedule thing is nothing new. In 2016, the Tigers faced 8 playoffs teams including Palmer (11-1), Nebraska City Lourdes (8-3), Howells-Dodge (7-3) and Heartland (9-2). East Butler finished 5-5 with a playoff win included, which is not too shabby.

Dalton Bohac is very efficient on offense, especially in the passing game. The southpaw connected on 59% of his tosses and was a good enough runner to come within 166 yards of being a 1000 yard runner/passer. But it’s on the defensive side of the ball where Dalton stands out.

Bohac has that built-in radar that draws him toward the play before it even develops. Whether it’s a pass of run, this guy will sniff it out and make the tackle.

All I need to tell you about Christian Harring is that Sacred Heart head coach Doug Goltz, already a legend, called him a “pure football player”. Gets no better than that. Coach Goltz is the best there is. One of my lifetime heroes for certain.

Not much Harring doesn’t do on the football field. The kid runs an :11.0 flat hundred, a 4.7 forty and possesses a 31” vertical, all the tools you need for the Irish, who won a Class D-2 championship in 2016.

You should see Harring play defense. Once this guy lays a hit, you never forget it and are gun shy the remainder of the game. The hit Christian inflicted on Lourdes WR Colton Fulton even rattled my bones. Harring’s crunch popped the helmet right off the sophomore’s head. Fulton was no slouch either, recording 408 receiving yards and 4 TDs. And a nose for the football, that’s Christian Harring.

On offense, #5 lines up anywhere in the formation and is a guy that absolutely wastes no yards getting to the goal line. No fancy cuts or direction changes, Christian Harring just gets to the edge and outruns the defense.

All these tremendous stats a year ago and Harring played sparingly in the semifinal and championship games after suffering a broken toe in the Bloomfield contest. Has to be one of the finest overall athletes in the 8-Man game.

I just literally laughed at some of the tackles Houghtelling made last year or what he did after he hauled in a reception. So dominating. Apparently Emporia State and Northern Iowa did too because both have offered a full football ride to the Cambridge physical specimen with rich bloodlines.

Houghtelling not only benches 310 and squats 393, but the guy has 4.67 forty speed, which means he can outrun many 8-Man defenses. If you think this lad isn’t tough, ask Dundy County/Stratton superstar Phalen Sanford how much kicks it is to see Houghtelling line up in the Cambridge backfield at fullback. Hit him high? Nope. How ‘bout low? Not a great idea either and if you get close he’s apt to reach out with his long arm and corkscrew you into the ground and continue on his jolly way.

Caden will outjump any defensive back going up for a reception and on some occasions will sneak into the secondary for a wide-open look from his QB. How does a 6-5, 240 pound tight end “sneak” past your defense? Beats me, but it happened more than once last year.

The kid also lines up at a slant from that DE position and either blows over or past his blocker or wins a hand fight that doesn’t even seem fair. And I’ve heard “yeah, but could he play 11-Man football and be a standout?”

The name Colby Ensz and Tri-County were synonymous the last 2 seasons in 8-Man football. Ensz, one of most dynamic RBs in the 8-Man game grabbed most of the headlines for the Trojans, who dropped down to the 8-Man game in 2015.

So Cooper Smith “flew” under the radar to many fans……..but not Tri-County opponents.

I wonder how many defenders Cooper Smith rolled like nickel cigar last season when he carried the football? They looked like bowling pins scattering at times. Good grief this dude is strong, and leg strength….holy cow. On occasion, Smith splits ‘em two at a time.

On defense, ole “Coop Dawg” loved to make appearances in the opponent’s backfield. Also athletic enough to leap up and bat down passes at the line of scrimmage. The guy just looks like he is 6-5 instead of 6-2. Plays like it too.

Did you realize other than the 2016 season opener against Superior, Smith had either double-digit tackles or at least 9 stops every single game? And Tri-County had two playoff games too. One of the best linebackers in 8-Man football I tell you.

I must agree with Bob Jensen of Huskerland Preps on his assessment of this young man. Cooper Smith will be a shining star this fall for Tri-County on both sides of the ball. Only this season, everybody will know it.

Charles Johnson has played on three pretty salty Perkins County football teams under coach Carlie Wells. In fact, Perkins has gone undefeated the past two regular seasons and won a playoff game each time before being upset in the second round.

Last season Johnson was the QB and All-State DB, along with super back/speedster Derek Sis. Entering 2017, Sis has graduated and coach Carlie Wells has moved into the Principle’s gig at Anselmo-Merna, but Charles has a pretty good cast back for the Plainsmen to work with this fall.

A starter since his freshman season, Johnson is one smart cookie on the gridiron. The Plainsmen are an option football team, Charles runs it well, but with the loss of Sis, new head coach Lance Steffen may employ more of the passing game out of that option set, making Johnson a dual-threat QB.

But it’s the defensive side of the ball where this dude shines. Nose for the football and sure, open field tackler make Johnson one of the best in the state. I’m also relatively certain his 9 interceptions led all of 8-Man football a year ago.

Want to hear something else about Charles Johnson that is beyond cool? Congressman Adrian Smith made a special trip out to Grant and Perkins County high school this past May 12th to recognize this young man.

Charles was chosen as the Congressional Art winner and his outstanding drawing of his dog Sophie will displayed at the Capitol Building in Washington D.C. for one full year.

How impressive is that! Very cool Mr. Johnson.