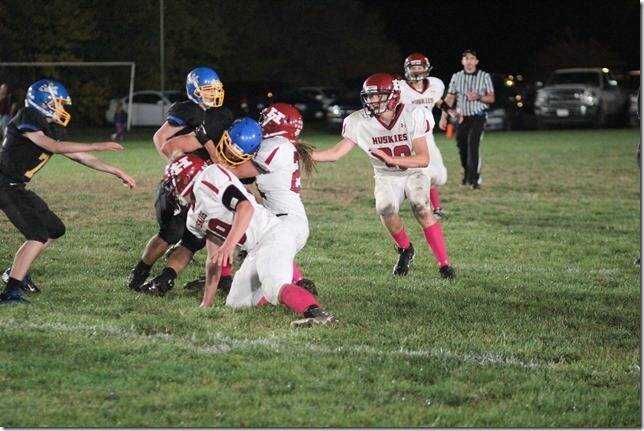 Get set for our second installment of 8-Man stars. Today we salute a dual-threat quarterback, one of the state’s most versatile athletes who plays RB, a Tight end who looks more like a Wide receiver, a Wide receiver who looks the part, and a Lineman who will be converted to a RB.

Get all that straight? Then let’s go full speed ahead.

Can you say Dual-Threat Quarterback? This guy always came up huge in big games last season. Theis flashed some fine offensive stats considering he split carries with the Peyton Watts and Brennan Bryan. Watts is gone, so Caden will be more of a force in that Bulldog backfield this Fall.

This will be Caden Theis 4th year as starter for Coach T J Nielsen at Osceola. He stepped into the shoes of All-State QB Luke Ericson a year ago and never missed a beat. Tough as nails runner, very strong throwing arm, and we’re getting started with Mr. Theis.

On defense, this guy plays like a 200 pounder from his LB position. Knows where the ball is at all times and literally punishes running backs to the tune of 97 tackles a year ago. Throw in 4 interceptions and a recovered fumble and you have a potential All-State defensive player.

Caden Theis also kicks off for Osceola, pounding 27 of those in the end zone for touchbacks. He does the punting, averaging 35 yards a boot and ran in 24 PAT conversions for good measure.

The ‘Dogs are loaded in 2016 and you will see Caden Theis have a “breakout season” in many people’s eyes, but those who follow the game closely know that the dude has been this talented all along.

Terrific on the field leader who is always focused. Very intelligent football mind.

Phalen Sanford, in my opinion, is the top small athlete in the entire state. A wizard in every sport would be an understatement. First ever 1000 yard rusher for Dundy County. He also led the Tigers to the State Basketball Tournament a year ago, averaging 17 ppg, 5 rebounds and 3 assists.

In track, Sanford runs :14.9 in the 110 high hurdles, 38.74 in the 300 Intermediates, pole vaults 15 feet, high jumps 6-4” and runs a :51.4 four hundred meters. Probably could be a state champion in horseshoes, table tennis or tiddlywinks if Dundy County/Stratton had those sports.

On the football field, Phalen Sanford has scored in every conceivable way there is in the game. He has touchdowns rushing, passing, and receiving on offense, has at least one Pick 6 on defense and has returned at least one punt and one kick return for scores. Honest to goodness, one sliver of light and this guy is off to the races, pulling away all the way to the end zone.

Behind Sanford’s multi gridiron talents, the Tigers went 5-3 last season, their first winning record since 2005. Dundy has gone 12-12 while during Phalen’s first 3 years in school. Prior to that, the Tigers suffered through a 6-42 drought, stretching back to 2008, all coming as an 11-Man team.

This kid has it all (already an All-State D-1 football selection) and my wish is that Dundy County/Stratton makes to the D-1 playoffs this season. Only one other time in history that has occurred, and that

Lead them to the promised land Phalen Sanford. The “Moses” of Dundy County.

Ragland is listed as a tight end on offense, but will line up at RB, WR as well as TE. I would access Mr. Ragland as a true Renaissance Man if you want to know the truth. Another guy that plays like a 190 pounder on defense with his brutal hits.

Thomas Ragland has already played on Two State Championship basketball teams at Lourdes, so he know the big stage. There is no doubt Lourdes CC will feel the loss of QB Hayden Miller on the gridiron and frankly, the position is so wide open now, Ragland could conceivably end up being the signal caller this fall.

The kid has great hands, really being targeted the final 4 games of the season last year, especially the final two. 36 of his 51 catches came in those final quartet of games. 596 of his 905 total yards came in those 4 contests including 11 of his 14 TDs.

His incredible 17 receptions for 202 yards and 4 TD performance against Howells-Dodge lifted the Knights to that 42-36 playoff win.

Stay tuned how things develop this fall at Lourdes CC. One thing for certain is that Thomas Ragland will be right at the center of things for this football team. Solid All-State candidate.

Stop and think about Ty Hahn. The kid piled up these stats as a Freshman. The dude doesn’t even have a driver’s license yet. Pretty imposing figure for a 9th grader a year ago and those of us not from southeast Nebraska probably weren’t aware that Hahn played for a pretty salty Johnson-Brock football squad.

Ty Hahn has all the tools of a junior in high school. On offense, he runs crisp pass routes, has soft hands, can catch throws in heavy traffic and has better than average speed. Good blocker as well.

May have had his best game against a terrific Lourdes CC team last season. Caught a screen pass on one sideline, reversed his field, picked up blockers and turned a potential 4 yard loss into a 10 yard gain. Also flashed some fancy footwork on a kick return, as well as a couple of stop and go moves and a nifty spin move at the finish of that return.

In that same game, the he made a textbook tackle on a very good running back.

Hahn also caught a TD pass in each of his last 4 games a year ago and recorded double digit tackles in 3 games.

This fall, he may play a bigger role on offense and will once again be an integral part of the J-B defense

What a future for this young man. The sky’s the limit for Ty Hahn.

Always came up big in 2016 when the Huskies needed him the most. No secret the offense was centered around record setting RB Austin Stuhr, but the 6-3, 200 pound Boehr was a trusted utility man on offense and a terror on that Huskie defense from his defensive end slot.

Boehr does not possess blinding speed (4.7 forty) but has a 33” vertical and can bench around 260. What Connor does have is a very high football IQ and just flat out enjoys playing the game. Had it not been for the Connor’s heroics in the first round playoff game versus a rugged Nebraska Lutheran team, the Huskies would have never survived to see West Point GACC in the next round and Austin Stuhr would never have had a shot to become the most prolific running back in the history of Nebraska high school football.

With 4:16 left in that Nebraska Lutheran game and the game tied at 36 each, Connor ripped the ball loose from the Lutheran ball carrier, then ran it in 30 yards for the go ahead score. Earlier in the game, Boehr kept a drive going by crashing for a first down on his only carry of the game. When Heartland did score and the Huskies pulled to within 2 points of Nebraska Lutheran, Boehr caught the 2 point PAT pass reception that tied the game at 36. Then came the famous Fumble Return TD.

Now we find out that Connor Boehr will be moved to Running Back this Fall to fill the shoes of the great Austin Stuhr. I say…...why not? Who better to carry the mail for a Heartland Huskie team that returns a very good nucleus for 2017.

Maybe we had better call Connor Boehr Mr. Renaissance Man. That may be even for apparent this season.