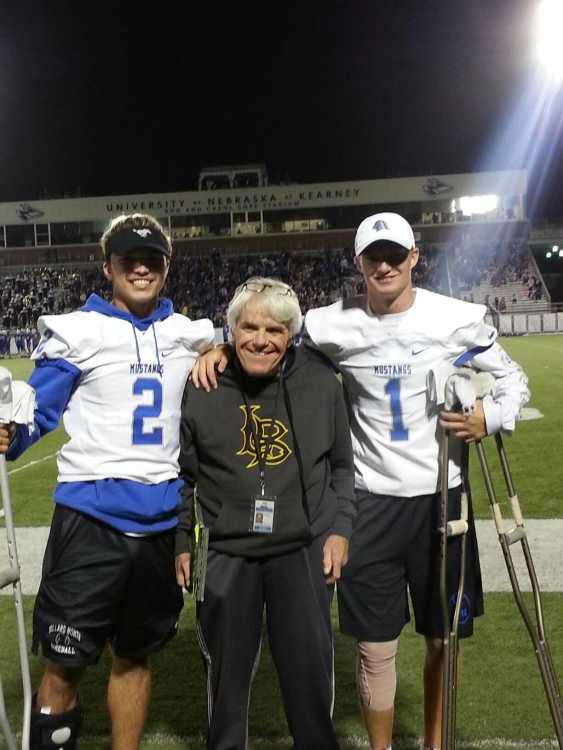 How good would Millard North have been last season if these two would have been healthy? Aaron Gerdes (left), Dylan Price (right).

Today we spotlight a Quarterback, a pair of running backs that are teammates, another pair of teammates who play wide receiver, plus a terrific offensive lineman.

Not everyday I salute 6 players in one blog, but definitely a first saluting a pair players on the same team that play the same position times two. Should be fun.

Tough to find a better story in 2016 than Joe Dolincheck. Off the media radar prior to the start of last season, Dolincheck ended up splitting time with a sophomore through the first 4 games, then took over for good in game 5 versus a tough Norfolk squad.

Dolincheck ended up burning the Panthers with a 23-35 for 314 yards/4 TDs performance that night. It was full steam ahead for the junior, who had thrown only one time in 2015.

It wouldn’t have been easy for any quarterback replacing the great Jaydn Kowalski, but Joe Dolincheck did something Kowalski could not pull off…..Lead his team to a Class A championship.

There is nothing fancy about Joe Dolincheck except what doesn’t show up on the stat sheet. The man makes great decisions on the field, is very accurate with his passes and maybe even more importantly, “played with incredible courage and toughness”, as Coach Michael Huffman put it.

What Coach Huffman was referring to was the injury Dolincheck suffered in the semifinal game with Creighton Prep. Late in the 2nd quarter, Joe incurred a fragmented bone in his thumb, including a broken joint. He not only finished the game, but finished it completing 9-17 passes for 187 yards and 2 TDs.

When it appeared he may not play the next week in Lincoln, Dolincheck came off the bench in that State Final game against Omaha North and led the Thunderbirds to a resounding 43-6 thumping of the Vikings, broken thumb and all.

Now Coach Huffman has his leader back for 2017, and despite the loss of several key players, you can count on Bellevue West being in the thick of the Class A race, and Joe Dolincheck is certainly a great starting point for the defending Class A champions.

Milton “Sweet Feet” Sargbah. So be it. Good lord, this kid can explode through the opening faster than a sneeze through a screen door. Just like a high speed water bug. Hey, no secret that Milton has great blocking, but all he needs is a tick of the clock to get through the hole and by that time the linebackers are looking at his rear end.

Sargbah has all the moves, stop and go, plant and change directions, cut back against the grain, but #7 often uses his 4.4 speed to outrun nearly any DB in Class A and is pulling away at the end to boot.

Here’s another thing about this “little” guy. He can bench 275 pounds. That’s right, not that far off a lineman’s expectations in the weight room. Doesn’t hurt to have a powerful fullback in the backfield lead blocking for you either.

Milton Sargbah is the Lightning part of the Viking backfield. This next young man is the Thunder.

Oh, nearly failed to mention that Sargbah kicks all he PATS for the Vikings (64-71 in 2016) and averages 44 yards every kick-off. What a guy.

The Dancing Bear, baby! 1,800 yard rusher Jordan Strong goes down in the 2016 season opener at Millard North and in steps a 225 pound sophomore who is fast, powerful and has a pair of feet so nimble he could make it on Dancing With The Stars.

You would think Zander Gray would play fullback for Larry Martin, but with speed like he possesses, why not alternate with Sargbah? Always a fresh RB in that Viking backfield and such contrasting styles have to drive defenses nuts.

The #1 Question of the day is….Just how fast is Zander Gray? The kid explodes through the hole nearly as quick a Milton Sargbah and had TD runs of 57 vs. Lincoln East, a 56 yarder against Grand Island and a 58 yard scoring scamper versus Lincoln Southwest a year ago.

Zander also had a 56 yard run against Lincoln East in the semifinal playoff game before being tackled at the Spartan 1 yard line. Add a 54 yard sprint against Lincoln SE and you know Gray has legit foot speed on that 225 pound frame.

Question #2 is how many defenders has Gray bowled over and how many yards after contact did he accumulate last season? Tackle this beast anywhere but the ankles or he tramples you like the Running of the Bulls in Pamplona, Spain.

Had it not been for the exceptional talent in C-1 a year ago, this kid would have been and shoo-in for all-state honors. Alex Schreiner has it all, 4.4 forty speed, soft, sure hands, all the fancy foot maneuvers, power, and blocking skills when he’s not catching the football. Probably even has a pretty girlfriend.

Schreiner did not play for a deep playoff run team either. Christian lost 5 of their first 6 games before closing things out with three straight wins, but Alex did his part to keep the Crusaders in every game.

His game against a fine Falls City team was a night to remember. LC won the contest 20-14. Schreiner caught 8 passes for 224 yards and scored 2 of the 3 touchdowns, recorded 11 tackles (8 unassisted) and even picked off a pass. One of his scoring passes was a highlight reel 82 yard reception on a flat pass pattern. Alex broke six tackles along the way on that beauty.

The marvelous thing about this kid is that many of his receptions are those really short flat out patterns. QB Treyson Bigler just flicks it out to Mr. Schreiner and lets him do the rest. And as I said, when Schreiner is not catching the ball, he is a great blocker, especially downfield.

Alex Schreiner also never fumbled the ball a single time in 2016. You probably would have guessed that anyway.

Alex Schreiner’s partner in Lincoln Christian’s “crimes” against opposing defenses. Almost a carbon copy of his WR classmate. Forty time is 4.6, but seems as fast as Schreiner on a fly pattern.

Really came on the last 4 games of the season a year ago, catching 35 of his 57 passes for 686 of his 901 total receiving yards. Set a C-1 state record against Southern the last game of the 2016 season by recording 249 receiving yards. Three of those 9 receptions in that game went for touchdowns.

Houchin has the quick, dancing feet and often wiggles out of tackles and cuts back against the grain with the best of them.

With Treyson Bigler returning at QB for Lincoln Christian this Fall, it would be well worth the price of admission to watch the aerial circus featuring the Masters of the Slip, Reid Houchin and Alex Schreiner.

Playing in the same offensive line as Super-Staters Tyler Ciurej and Sam Vanderslice is a great testimonial in itself. The tall, slender looking Reynolds was key to Jaylin Bradley’s outside running (zone) game and was a crucial protector of the Thunderbird QB all season from his left tackle slot.

If you recall, Bellevue West piled up 3,656 yards rushing and 3,354 yards through the air 2016 and you know who was responsible for these gaudy statistics don’t you? Players like Ty Reynolds.

This 2 year starter has developed great hand fighting technique. Don’t kid yourself, Reynolds can pancake a defender if he must, but as a pass blocker or a pulling lineman, Ty can just simply use his leg strength and hands to hold out a defender. The dude simply holds his ground against ‘em all.

I honestly believe Ty Reynolds could be a top notch Sumo wrestler if he felt like it but I doubt if would go for the Mawashi (loincloth) deal or the daily calorie intake thing.

I would be shocked if Reynolds, who may have gained 15 pounds of muscle recently, did not land a Division One scholarship before the curtain closes on the 2017 prep football season at Bellevue West.

Where are you planning to go on opening night 2017?

Wahoo Neumann @ Norfolk Catholic on Thursday, August 24th and McCook @ Aurora on the Friday sounds pretty attractive to this guy.