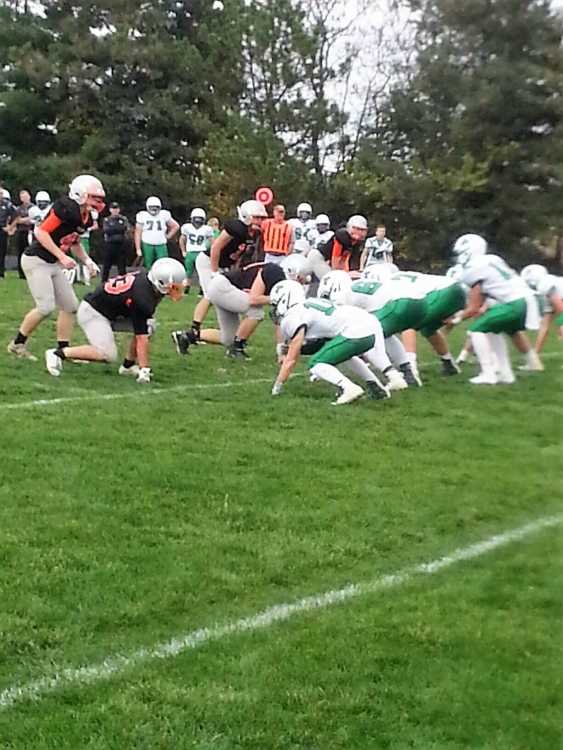 Today we begin to spotlight top notch players from the 8-Man football scene here in Nebraska. 8-Man football is one of the greatest forms of high school football on the planet. Speed kills on the tighter sidelines of an eight man layout.

Bottom line for this guy is a sideline view brings you so much closer to the 8-Man game. The hits, the smells, the action in general. A real rush for a football fanatic.

Moving along, remember, these are not player ratings. There is no particular order when spotlighting these young athletes. They are all highly skilled and if you always keep in mind, football is a Team sport.

Today we spotlight a Quarterback, a couple of RB’s, a Tight End/LB and a Lineman/Kicker.

Coach Doug Goltz knew he had a good one in Bippes when the sophomore, in his first career start, brought his team back from a 24-6 halftime deficit to defeat bitter rival Lourdes Central Catholic 34-24. Bippes threw for 258 yards and 4 touchdowns at Jug Brown Stadium that night.

Funny thing was, Drew Bippes got better as the season progressed. I saw the poised 1st year QB in action in a second round playoff game at powerful #1 seed Osceola. He fired a touchdown pass to Tristan Keithley with 58 seconds left to seal the win on that gorgeous November afternoon.

12 days later in the semifinal road game against BDS, Bippes ran the ball 4 times for 27 yards in the final drive and scored the winning TD on a 1 yard plunge. Remember, BDS rattled off 36 unanswered point to down Sacred Heart on October 7th of last season. Payback was sweet for the Irish that night.

The rest is history, as Drew led the Irish to it’s 8th State Title a week later when they turned back Twin Loup 44-28 in Lincoln. The sophomore looked like a seasoned veteran that day.

Drew Bippes was not called on to run much last season and did not play defense. But when the playoffs rolled around, the multi-talented Irish QB became a dual-threat man and ended the season with 609 yards on the ground and 11 scores.

The thing that makes the talented junior-to-be so successful is twofold. Bippes knows where his receivers are at all times in those Irish pass patterns and has an incredible flick-of-the-wrist delivery that is deadly accurate. He can scramble, throw on the run and fire the long ball with a great completion percentage.

Goltz loves to run the football, but with a QB like Bippes, things get tougher for Sacred Heart opponents who know he can run as well as throw.

As far as poise, football smarts, and all-around athleticism, Drew Bippes just may be the best quarterback in Class D-2 this season……..and he’s only a junior.

One tough cookie on both sides of the football, Alex Horky looks more like his coach (Mike Kozeal) did on the field back in for Sargent in 1982 with every game he plays. Kozeal breeds tough football players and Horky is just one in a long line of great ones to come out of Sargent, who with Loup County, forms Twin Loup.

Last season Horky and Twin Loup made it all the way to Lincoln before falling to Falls City SH 44-28 in that final. The hard charging junior reeled off 10 straight 100 yard plus rushing performances, on his way to 11 when it was all over.

Alex scored at least one rushing touchdown in every single outing and was a big threat catching the ball out of the backfield in the playoffs. In fact, Horky hauled in 6 in that D-2 final, good for 109 yards and a score.

The 165 pound dynamo is also one of the most feared return men in 8-Man football, having compiled 584 yards on punt and kick returns. In fact, Alex Horky finished 2016 with a massive 2,886 All-Purpose yards.

Alex is a mean motor scooter on defense, as witnessed by his 198 stops, 13 for losses, 4 interceptions and 5 recovered fumbles. One of the purest form tacklers I saw a year ago. Who do you suppose tutored him in that department? If you guessed Mike Kozeal, you win.

With 9 other seniors surrounding Alex Horky this Fall, another trip to Memorial Stadium in certainly not out of the question.

This gentleman is an incredible looking athlete who possesses multiple skills. I was blown away when I saw him against Elm Creek in the 1st Round of the D-1 playoffs. Elm Creek had a terrific defense and Benson tore them up with a grueling 42 carry, 206 yard performance despite the 36-12 loss.

Benson started slow a year ago for the 4-4 Trojans, but finished very strong on both sides of the ball. The 6-4 Cambridge product runs a 4.49 forty but has that beautiful 400 meter stride and can flat out run over and pull away from defenders.

Honest to goodness, I counted his steps on a breakaway run that evening in Elm Creek and it took only three steps to cover 5 yards with his long strides.

On defense, Taten simply fights off defenders easily to get to the ball carrier. Very strong and athletic, expect big things from Benson and big teammate Cayden Houghtelling this season.

If I were putting together an 8-Man football team from scratch, Taten Benson would be one of my first choices.

Already a 2-time All-State selection at Linebacker. A ball carriers worst nightmare when you see this guy’s 4.6 speed in the forty, 11.6 hundred speed, and 400 pound deadlift strength bearing down on you. Uncanny sense of where the football is at all times, Havlovic just simply swallows up ball carriers.

Havlovic (pronounced Have-Lick) just gets bigger, stronger, faster, and smarter every year. I mean, the dude was a “man” as a sophomore on defense. Saw him play against Lourdes CC and immediately put him on my All-State defense at LB.

On offense, Trevor Havlovic has the best hands in 8-Man football. He’ll catch anything near him and with a 34” vertical and a wingspan like an eagle, he won’t miss many passes thrown his way. Trevor also sheds more tacklers than an Alaskan sheepdog shed coats in the summertime. Would be tacklers just slide off him like water off a duck’s back.

This young man could easily play in Class A.

You’re not going to get many stats from coach Rotter, or at least I can’t, but when it comes to BDS, you just need to watch them play to get what you need.

On defense, Stengel covers more ground on the football field than the Gypsies did the countryside back in the day. Always around the ball and fighting off blockers to get to the man with the pigskin. Pretty much unblockable.

Big time player on defense that makes big plays when the Eagles need them. On offense, Stengel is a terrific blocker and provided the opportunity for tons of yards for the great Kale Kleinschmidt a year ago.

And honest-to-pete, I swear this guy puts every single kick-off in the opponent’s end zone. Every one. In the Lawrence-Nelson playoff game last season, I just put the 15 yard line the starting point for L/N following a BDS score…….even before Stengel even tee’d it up for the kick-off. No brainer apparently.

BDS football players are the roughest, toughest, meanest dudes in the 8-Man game. No small wonder Holden Stengel will lead the charge again in 2017. Fits right in the mold of pure football guys there.

The guy also never comes off the field. No need for stats here. Holden Stengel is the Real Deal.

Is there a better D-1 football facility than Humphrey? Down in a bowl, sparkling artificial turf, gorgeous trees on the South side, beautiful corn field to the West and a park at the top of the hill. Just like a dream.

Not too far off Humphrey’s pace is one of the BDS facilities in Shickley. You can sit at a picnic table on the South side on a hill and view the action. Very cool.

Any additions to this? Bob Jensen would certainly know!