Teddy Allen is "The Man" in Nebraska Prep Basketball. 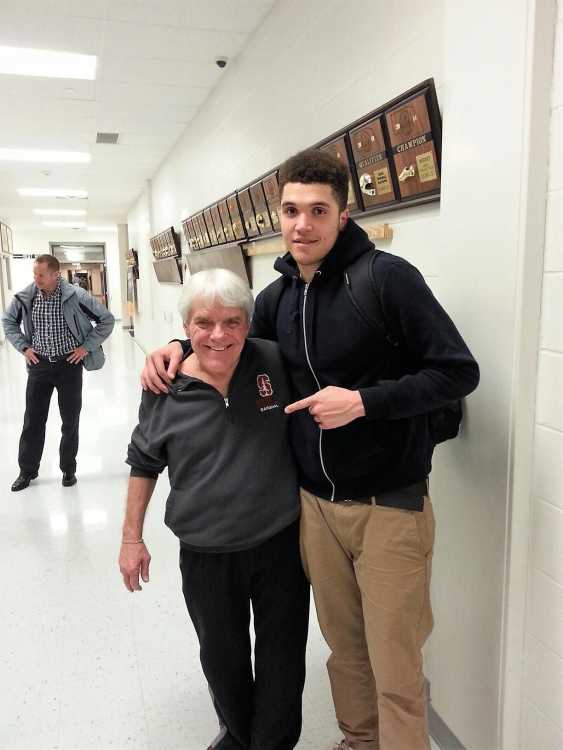 Teddy Allen is "The Man" in Nebraska Prep Basketball.

I saw a young man play the game of basketball tonight from a front row view. Right on top of the action from start to finish. I knew this opportunity might be coming so I intentionally did not watch any film on this player. My mind slate was cleared of any previous comments I had heard about this young man. It was as if I had never heard of Teddy Allen of Boys Town before this night.

This is the way it had to be.

I do the PA announcing at Grand Island Central Catholic. By a stroke of good luck, Boys Town was a lower seed than GICC in the first round of the rugged Centennial Conference Basketball Tournament. My good friend, head basketball coach Tom Krehbiel was bringing his Cowboys to town for a rare Tuesday night matchup with GICC.

I cancelled all my drum students to work the gig. Wouldn't have missed it.

The chance to see Teddy Allen, the highly regarded West Virginia recruit, was real. I had an idea Krehbiel may have considered that Teddy was the best he had ever coached......ever. That's saying something because Tom Krehbiel is one of the best in the business. No doubt about it.

Allen was much more imposing than I had anticipated. The cliché is over used, I know, but he looked like a man among boys on the court during warmups. Like a dude who crashed a playground pickup game with kids 5 years younger. His frame was impressive. 6-6 and maybe 220 pounds. He glided like a gazelle and stroked the ball like an artist with perfect brush strokes. But now, Gametime. I needed to see the highly regarded Teddy Allen in action.

GICC is not a physically imposing team, but can play. The program has been built on defense throughout the years. They smother you. My son-in-law Tino Martinez, the Crusader head coach, put senior Chase Wenzel on Teddy on this night.

The 6-2 Wenzl had just limited Adams Central sharpshooter David Bohlen to 14 points a Saturday ago on the road. When the game began, the GICC senior looked small next to Allen.

You know, I do not believe Boys Town has beaten Central Catholic on the road in my memory, albeit in only two previous meetings. It was different this trip out.

Teddy Allen came to play. The kid had it all. I haven't witnessed a player of his caliber in years and this is Class C-1 friends. I preached all weekend about Teddy's abilities and I had only read about it. It was a feeling. It comes from watching high school athletes for 53 years. Doesn't matter whether it's football or hoops. You know one when you see one......a special player that comes along only once in a decade.

Teddy Allen dropped 42 points and 15 rebounds on the Crusaders in Boys Town's 70-55 win. He never left the court. And consider this. GICC is a good basketball team and Teddy was only 1 of 8 shooting in the 3rd quarter.

Plus, Allen was coming of a Quad-Double against Wayne at the Ralston Arena Saturday night. What does an 18 year kid do for an encore?

Teddy Allen is the best player in the state of Nebraska, hands down. A complete player that can play anywhere on the court. Allen is the perfect example of the wise saying "Every shot is a rebound back to yourself".

Teddy can shoot from any point in the half court, misfire on a shot, and in the blink of an eye be there to put it back through the cylinder. It's a sneaky kind of blinding flash after a stroke, a Houdini type of move that any normal player cannot see or react.

Allen just slithers through the defense, and is there with either a velvet-soft put back shot or a thunderous jam.....if he feels like it. And the dude just doesn't foul. His body control is incredible. His moves are like an All-American college football running back on the football field. You know, like Barry Switzer says, "like smoke through a keyhole, man."

It's like Tom Krehbiel stated to Independent sports writer Dale Miller "when you see that look in his eyes, he's a load." "He's can score in so many ways and he's done it at a high level." "At the C-1 level, it's hard to stop"

Teddy Allen is so physically overpowering. So strikingly big when you look put him next to most C-1 players. He can stroke the shot from 30 feet, gliding the ball off his fingertips with such pretty spin, or he can ignite the jets and blast through the paint, bringing out another bag of magic tricks once he reaches the basket.

It's not often, but the splendid Boys Town package can lull you to sleep, then suddenly sense the kill, turning on the scoring in lethal spurts that can put a game out of reach.

Yes, Boys Town is only 9-5 and was beaten soundly by the mighty Wahoo Neumann (43-82), but this team is improving in a hurry and once Allen's surrounding cast catches fire, this basketball team will be dangerous.

That's not news to anyone who follows high school football or basketball in this state. Year in and year out, Boys Town is frightening with their athleticism. When it clicks, it buries you. When it doesn't, it's ordinary, but it's always there, always ready to explode. Opposing teams just hope it won't click and jell on their night.

The remaining two Centennial Conference tournament games may tell a lot about this Boys Town team. The Cowboys are starting to click. They travel to St. Cecilia Friday and then play either Neumann or Scotus Saturday if they win.

And this Boys Town team will, in all likelihood, make it to the State Tournament.

Pick your poison if you face Teddy Allen. Let him get his points or dare to shut him down and leave the vastly improving remaining four players open. It is my belief, there may not be a single player in the state that can shut down Teddy Allen. I have not seen a player of his caliber for a long time. Not with a complete player with his vast abilities.

It will be difficult to fall asleep tonight. It happens when I see a great drummer. Your mind races and tries to grasp what you have just witnessed.

It was a special night just to see Mr. Allen perform. Yes, they knock him for a lack of effort on defense. I didn't see that tonight. And things will be vastly different at the next level when Teddy enters the world of Bob Huggins basketball at West Virginia. But I will make a prediction right now.

Teddy Allen will flourish at the Division One level. It may not transpire right away, but his name will grace the headlines of D1 basketball in the near future and all who witnessed his play on the hardwoods of Nebraska high school basketball will say.......

"I saw that kid play a few years back. He was "The Man" in Nebraska Prep Basketball circles."