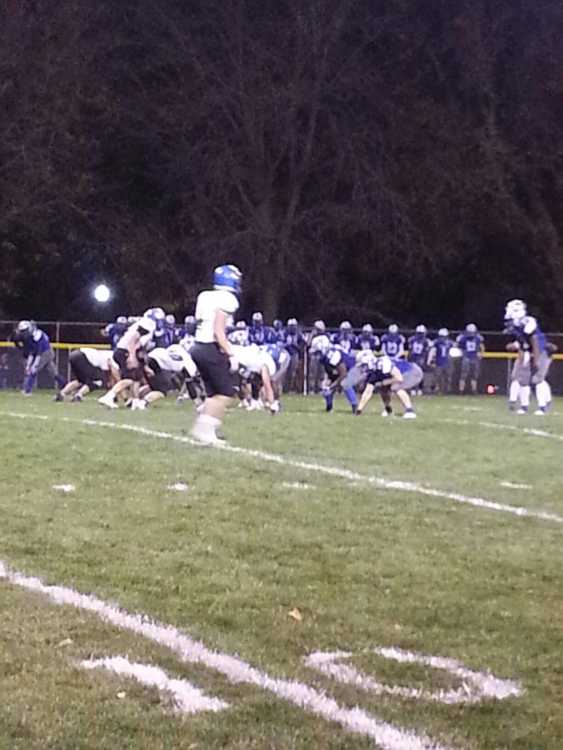 The O'Neill defense is ready to attack TJ Davis and the Boys Town "O" game.

Boys Town - So many eyes were focused on the semifinal matchup between Wahoo Neumann and Kearney Catholic game on Friday night in Wahoo. The masses must have figured O'Neill could win their semifinal game with Boys Town.

The O'Neill Eagles flew into The Corral, mixed the ground attack and aerial game with deadly efficiency, and came away with a 27-13 over an athletic Boys Town football team.

The semifinal win sends the undefeated O'Neill football family to Memorial Stadium a week from next Tuesday for a C-1 State Championship matchup with 11-1 Wahoo Neumann.

Gametime will be 2:45 on Tuesday, November 22nd and the Eagles have a little score to settle with the Cavaliers. We'll fill you in on that one in a bit.

On a crisp and windless Friday night, made to order by the high school football gods, the O'Neill offense was clicking while the Eagles defense was equally as menacing as a full house looked on.

It seemed like the 12-0 Eagles might run away with this semifinal tilt, but the Cowboys of Coach Kevin Kush never gave up despite trailing 21-0 at the halftime break.

Boys Town looked scary on its opening drive, advancing from their own 35 to the O'Neill 27 yard line before the Eagles defense killed the drive.

The Cowboys ate up half of the 1st quarter plus 12 seconds, using some nifty jet sweep action with Jordan Phillips sneaking around from the opposite side and mobile quarterback TJ Davis sprinkling in some pass completions with his QB draw plays.

But the Eagles defense came up with a stop 27 to halt the opening surge.

O'Neill did exactly what I thought they would do on their first play from scrimmage. Test that Boys Town secondary with a home run bomb, delivered by the hands of junior gunslinger Alex Thramer.

Thramer launched a skyrocket aerial to a streaking Justin Appleby, who hauled it in for a gigantic 61 yard gain, stretching from the Eagles 29 yard line to the Boys Town 10.

Three plays later, Thramer again found his classmate Justin Appleby, this time for a 10 yard pass/catch touchdown connection. Wyatt Liewer booted the PAT through the Corral uprights and the Eagles were on their way with a 7-0 lead.

Appleby made the Cowboys pay again only two plays into their ensuing possession.

The versatile two-way performer picked off a TJ Davis pass, giving it right back to O'Neill at their own 47.

But a holding call on the Eagles, the first of what seemed like half a dozen, set the Eagles back and the Boys Town defensed stiffened.

O'Neill kicked their ground attack into high gear on their initial possession of the 2nd quarter. It took only 3 plays and a 15 yard personal foul penalty by Boys Town for the Eagles to up their advantage to 14-0.

With the ball resting on the O'Neill 26 yard line, Thramer handed the ball to punishing Bailey Thompson, who followed his blockers, mowing over Boys Town defenders for a 22 yard gain.

The Cowboys spilled Thompson for a 1 yard loss on the next play, but the celebration was brief as Boys Town was whistled for a late hit out of bounds on Alex Thramer.

That put the ball on the Cowboys 38 yard line. The very next play, 185 pound junior Shayne Campbell followed his barrage of blockers perfectly, racing to the end zone for a 38 yard TD scamper.

Meanwhile, the O'Neill defense was making plays. If defensive tackle Jason Hahlbeck wasn't battling down (and nearly intercepting) a TJ Davis pass, he was in the Cowboys backfield recording a sack or keeping Davis on the run.

The Eagles were really in good shape when they capped off an 8 play, 4:07 drive with an Alex Thramer to Justin Appleby 12 yard TD connection with 4:05 to go in the 2nd quarter. Big play on the drive was a Thramer to Appleby 28 yard pass play.

Boys Town put any thoughts of an O'Neill route to sleep when speedy, dangerous Dashawn Bates swept to his right and slipped through Eagles tacklers for a 52 yard touchdown sprint to with 6:29 left in the 3rd.

The long scoring run seemed to ignite the Boys Town defense as well as they stuffed the visitors on the following drive. Only problem was the O'Neill defense was stingy as well in the 3rd stanza and all night for that matter.

The Eagles offense came alive as the 4th quarter began, applying a numbing 5 minute, 12 play drive that basically drained the life out of the Cowboys.

QB Alex Thramer was spectacular during the 83 yard march down the pristine Corral grass surface, completing 3 passes for 49 yards, two of which were caught by Aquinas game hero, Wyatt Liewer.

Thramer snuck in from the Boys Town one foot line on a 3rd and one and the Eagles could sense a trip to Lincoln with a 27-7 lead and 6:48 showing in the 4th and money quarter.

Boys Town would eventually score on the game's final play after calling two time-outs in an effort to send the seniors out on a high note.

TJ Davis completed 5 passes on the 9 play drive, including the 32 yard scoring toss to Cordell Cade with no time showing on the Corral scoreboard clock.

Junior QB Alex Thramer was about as efficient as you can get for unbeaten O'Neill. The sharpshooter connected on 12 of his 18 pass attempts for 206 yards and 2 touchdowns and no interceptions for the evening.

Justin Appleby, who is almost a shoo-in for an All-State selection, had 5 receptions for 126 yards and two TDs. The splendid junior averaged nearly 26 yards a grab.

The Eagles ground game was paced by Bailey Thompson, who carried 9 times for 60 yards. Shayne Campbell took the per carry average award (9.3) with his 56 yards on 6 carries and a score.

The Eagles amassed 404 yards total offense for the night. On defense it was Jason Hahlbeck that proved to be the biggest pain to Boys Town. The 215 pound senior recorded 16 tackles on the night, 3 for losses.

Bryce Heiser added 10 stops, while Tyler Regan, a 195 pound senior basketball standout, chipped in 9 tackles, 7 of which were solos, 3 of those going for losses.

All in all, the swarming O'Neill "D" notched an amazing 8 tackles for losses.

For Boys Town, who finishes their terrific season with a 9-3 mark, it was junior QB Ti'jaih Davis who sparkled.

The poised Cowboy signal caller completed 16 of 22 passes (72%) for 138 yards and a TD with one pick. Speedy junior Deshawn Bates rushed for 104 yards on 12 carries, including that sweet 52 yard scoring jaunt.

Cordell Cade led the Cowboy receiving corps with 57 yards on 5 receptions and a touchdown.

The Boys Town defense, who recorded 5 tackles for losses themselves, were paced by TJ Davis, who made 6 tackles, all solos.

To illustrate how well this Cowboy team tackled, 35 of their total 37 tackles in the game were of the solo category. These guys definitely knew how to wrap up.

O'Neill returns to the Class C-1 Title game for the first since 1982, when the Eagles were swamped by Jeff Jamrog and a superior Elkhorn Mt. Michael football team, 38-0. I was there at the Elkhorn Middle School football field that night 34 yards ago, when Mike Hedlund and his O'Neill buddies just couldn't match up with the mighty Knights coached by Killer Kane.

Where was Jim Bright when you needed him?

And that score to settle with Bishop Neumann? It wasn't on the football field. Flash back to the SemiFinals of the Class C-1 State Basketball Tournament at Devaney.

The Eagles had the powerful Cavaliers on the ropes in the semifinals after beating Pierce 49-34 in the opening round. O'Neill led the mighty Neumann squad 18-15 after one, and stretched the advantage to 33-25 at halftime.

Some things you just never forget.