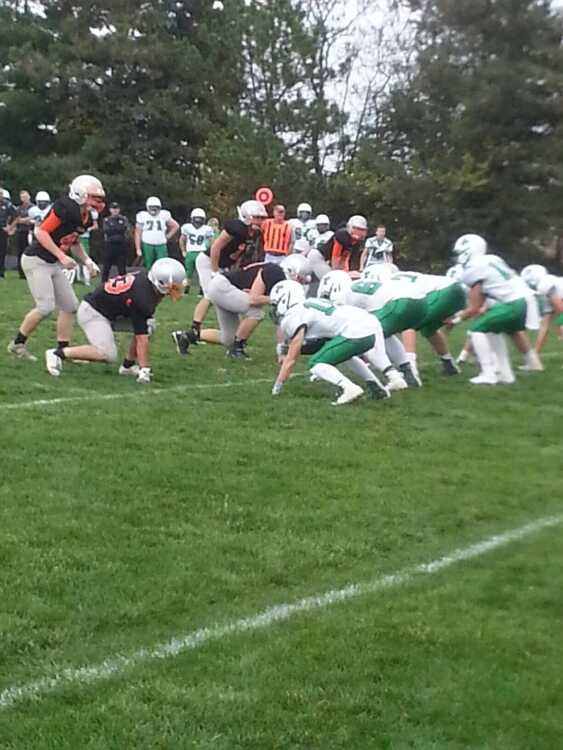 Osceola, NE - Legendary Falls City Sacred Heart football coach Doug Goltz made a killer defensive switch at halftime and it payed off, as the visiting Irish walked away with a 34-28 second round Class D-2 playoff win over #1 seeded Osceola.

The simple, but effective switch from a 3-4 defensive set to a 4 lineman, 3 linebacker set, stuffed the efficient Osceola offense, while the Sacred Heart defensive secondary was coming up with 2 late interceptions to seal the win late in the contest.

Not that the Irish offense was asleep in the first half, but the tight, double-wing Osceola offense was getting their way enough in that opening half to hold a 14-0 1st quarter advantage, and a 22-12 halftime lead.

The 7-1 Osceola Bulldogs took the opening kickoff and promptly marched 57 yards in 8 plays to grab an early 8-0 lead. The drive consumed only 3 minutes, 5 seconds.

Osceola upped the advantage to 14-0 when Bulldog quarterback Caden Theis, a tough-as-nails 170 pound junior, took it in from the Sacred Heart 1 for their 2nd score of the quarter.

The Irish got their own offense cranked up in the 2nd quarter.

Quarterback Drew Bippes, a 170 pound sophomore, orchestrated the 1st scoring drive, connecting with Noah Keller for a 7 yard TD pass for their initial score of the game.

Three minutes later, Bippes escaped for a 48 yard touchdown run, which was aided by a crunching pancake block by 316 pound offensive tackle Bryant Jorn. The massive senior literally flattened an Osceola defender, who was bearing down on the the Sacred Heart QB.

The Bippes run closed Sacred Heart to withing 14-12, but the Bulldogs were not done in the first half.

Three minutes later, Osceola turned to RB Peyton Watts, who ripped off runs of 12 and 10 yards, before hitting paydirt from 6 yards out. The touchdown gave the Bulldogs a 22-12 halftime advantage.

Then came Doug Goltz's halftime defensive adjustment that really put the halts to the efficient Osceola offense, who had been virtually unstoppable all season after their opening loss to BDS.

While the Irish 4 man "D" line was stuffing the powering Bulldog running game, the Sacred Heart offense turned to the run game in the 2nd half, after throwing 15 first half passes.

The Osceola defense played very well in the 3rd quarter, holding the Irish out of the end zone until the waning moments of the that stanza, when Drew Bippes hooked up with Tristan Keithley for a 2 yard scoring pass with just 37 seconds left in the quarter.

That cut the Osceola lead to 22-18 entering the 4th quarter, one the full house in attendance at Osceola will not soon forget.

Drew Bippes gave Falls City Sacred Heart their 1st lead of the game (26-22) on his one yard touchdown run with 6:49 remaining. Christian Harring, a fleet-footed 166 pound junior, was a key figure in the 10 play, all running play drive.

Harring had big runs of 13 and 16 yards during the nearly 4 minute possession.

The dramatics that followed were not for the weak at heart.

After forcing an Osceola punt with 5:42 left in the game, the Irish looked in control despite the slim 26-22 advantage. Then the unthinkable happened to the usually rock steady Christian Harring.

The junior speedster was on his way to a nice gain when Osceola junior Bryan Brennan appeared to literally swipe the ball away from Harring, putting the Bulldogs in business again at the FCSH 23.

It took only 6 plays till Caden Theis bolted in from the one yard line for the go ahead score. The double PAT score fizzled, but Osceola had regained the lead, 28-26 with only 3:23 left in someone's season.

The Osceola defense came alive on the ensuing Irish possession. Sacred Heart also did themselves no favors when they were whistled for a block in the back, then intentional grounding after two straight pass completions.

The Bulldogs looked like they had secured a win after a 4th and 17 play ended with an incomplete pass play for the Irish.

Osceola took over at the Falls City Sacred Heart 36 with a minute, 49 seconds left in the game.

Facing a 3rd and 10 at the Irish 36, Osceola opted to throw a pass. The clock read 1:38. You may recall, Osceola QB Caden Theis had thrown only 44 passes all year coming in. But the junior had been efficient, completing 26 of those attempts for 433 yards, 8 TDs and 2 INTS.

But Sacred Heart's Christian Harring, who thought he had lost the playoff game because of his prior fumble, rose to the occasion, picking off the pass. Harring pirated the Theis aerial at the Irish 31 yards line, returning it all the way to the Osceola 26.

The very next play, Irish quarterback Drew Bippes rolled to his right and found Emerson Keithley for the winning 26 yard TD pass. Fittingly, Harring powered in for the two point conversion, giving Sacred Heart a 34-28 lead.

Osceola had one more shot in the game, but senior Connor Pinney iced the Irish win by picking off another Caden Theis aerial with 44 seconds left.

Falls City Sacred Heart QB Drew Bippes completed 12 of 18 passes for 73 yards and three TDs in the game. The outstanding sophomore also rushed 23 times for 115 yards, plus two more touchdowns, having a hand in every one of the Irish scores.

Caden Theis led the Osceola ground attack with 116 yards on 26 carries and 2 scores. Peyton Watts added 95 yards on 14 touches and a TD for the Bulldogs, who close the 2016 season at 7-2.

Falls City Sacred Heart moves on to the Class D-2 quarterfinals and will travel to Bloomfield next Tuesday. The Bees blasted Lawrence-Nelson, 50-20.