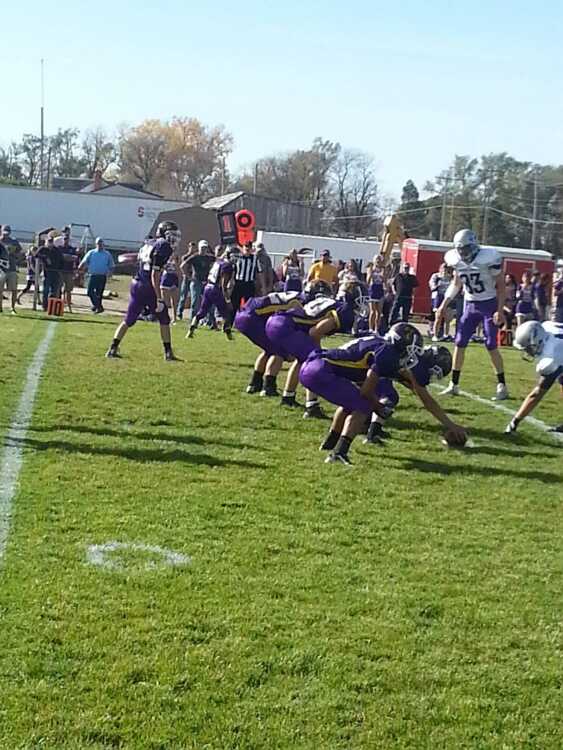 The SEM line prepares for a Jason Line pass.

Played in weather conditions that resembled late August instead of late October, temperatures flirted with the 80 degree mark, as Garden County quickly jumped out to an early 14-0 lead on a 25 yard TD pass from QB Mason Zorn to outstanding freshman Reid Spady.

SEM let their visitors they were not going away quickly by scoring the next 2 times as Jason Line fired a short scoring pass to Trace Claflin, then hit paydirt on a 14 yard scamper on the Mustang's following possession. That knotted things at 14 apiece with only 51 seconds gone in the 2nd quarter.

That's when Garden County looked as if they were going to put SEM away before halftime, scoring on their next three possessions to take a 34-14 lead.

The Eagles had a chance to put another score up right before the half, but SEM snuffed out the opportunity when they sacked Mason Zorn.

Things got interesting to start the 3rd quarter when Garden County RB Nic Koppmann fell out of bounds on his own 1 yard line attempting to field the SEM kickoff. Things went downhill for Garden County for the next 9 minutes.

SEM's Jason Line picked off a Mason Zorn pass at the Garden County 37 and five plays later the SEM quarterback took it in from the 9 yard line. The drive was aided by a targeting penalty by the Eagles.

The next time the Mustangs had the ball, Line again found Trace Chaflin, this time for an 18 yard touchdown. In a matter of three minutes, 16 seconds, SEM had seized the momentum and pulled to within 34-28.

But Garden County came up with a killer drive on the ensuing possession, fashioning a 10 play, 4:18 drive that ended with Zorn's 3rd touchdown pass of the sunny afternoon, a 13 yard beauty to Nic Koppmann, who was all by his lonesome in the middle of the end zone.

After holding SEM on the next go-around, the Eagles tacked another one on the board when Mason Zorn ran it in from the 4 yard line. That score came on the very first play of the 4th quarter and put Garden County up 48-28.

SEM would again not go away, as Line drove the Mustangs right down the field. The senior QB, who had thrown for 1,777 yards and 15 TDs coming into the playoff game, found junior Kevin Boteo for a 24 yard scoring strike to pull SEM to within 48-35.

Garden County would tack on an insurance touchdown with 1:43 left in the game when Mason Zorn fired his 5th touchdown pass of the afternoon, a 14 yard strike to Austin Dormann, who was all by himself in the corner of the Mustang end zone.

Mason Zorn, the Garden County signal caller, ended the afternoon by having a hand in 7 Eagles touchdowns. He was 11-20 through the air for those five scores (1 INT) and ran the ball 18 times for 53 yards and score, plus his 19 yard Pick-6.

Nic Koppmann, the 140 pound junior, led the Eagles ground game with 98 yards on 15 carries and a score. Junior Blake McCormick added 88 yards on 18 tries. Garden County ended the playoff win with 247 yards rushing and 182 yards through the air for a total of 429 yards.

Freshman Reid Spady, the 160 pound freshman, and a sure fire All-Stater in the future, grabbed 7 receptions for 150 yards and 2 TDs. He also had 8 tackles on defense.

SEM's Jason Line completed 15 of 32 passes for 212 yards and 3 TDs to lead the way for the Mustangs, who complete their season with a 6-3 record.

Garden County, who improves to 8-1 on the year, will return to Oshkosh to face a powerful and undefeated Twin Loup team next Wednesday. Twin Loup trounced Wauneta-Palisade, 52-14 to advance.