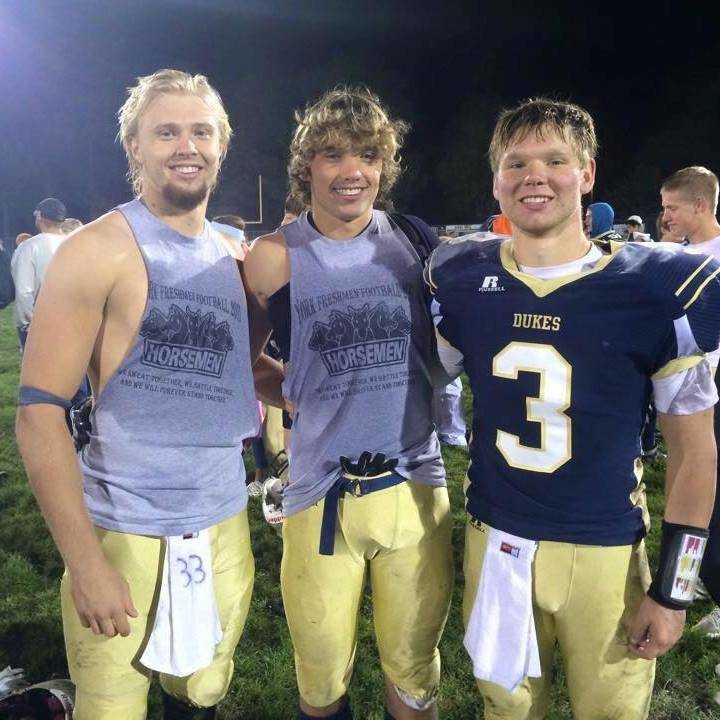 Damon Kaliff-York - All-State Quarterback/Linebacker candidate has his career come to a cruel close when he suffered a broken leg early in the Seward game last Friday. Fate has not been kind to Super Coach Glenn Snodgrass and the York Dukes the past two weeks.

Last week against Aurora, another bonafide All-State candidate, Alex Kowalski suffered a broken bone in his foot to end his year. The FB/LB was one the most passionate players I have run across the past 3 seasons.

And Damon Kaliff, the farm kid from McCool Junction who made the transition from 8-Man football to big boy football in York, threw for 1,516 yards a year ago and 665 this season before going down with the injury.

Damon was a player you could not keep off the field. Coach Snodgrass had to use this pure football athlete, who played at a 110% charge from start to finish. Kaliff was one of the only Dukes to give Elkhorn South fits with his penetration into that sacred Storm backfield from his linebacker position.

Damon Kaliff showed up every week to play and lead this York Dukes football team. I can only imagine how he practiced.

I also saw him charge into Aurora All-Stater and Husker recruit Austin Allen last season at the end of a run near the Huskie goal line. The collision was so violent that it sent Allen back several feet. It made my bones rattle from head to toe because the play was only a few feet away from where I stood on the sidelines.

The sad thing about this entire deal with Damon is that he went down with a season ending injury in the first round of the playoffs at Elkhorn South. It was on York's first possession and Damon was looking so strong.

Sometimes life doesn't seem fair, but as Damon Kaliff, Alex Kowalski, and the Millard North All-Staters Aaron Gerdes and Dylan Price found out, it is part of the painful process of dealing with life's setbacks. So difficult.

*Trevor Nichelson-Ashland-Greenwood - Set another record in the Bluejay's 42-20 victory over Southern. Nichelson ran for 248 yards on 20 carries and scored touchdowns on runs covering 36, 33, 5 and 72 yards.

In the process, Trevor set the Class C-1 Career Rushing Record with his 6,180 yards. That vaults him into a solid 5th place on the All-Time Career Rushing List regardless of class. With only one game remaining for Ashland-Greenwood, the 4th place total of 6,626 yards by Howells-Dodge is probably too far off to catch. Or then again, never say never with this dude.

Nichelson has already set the C-1 Career Touchdowns record with his 84 scores and crushed the C-1 Single Game Rushing record with his 484 yards back on September 23rd against Milford-Dorchester.

I'm at a loss for words.

That's 7 consecutive 100 yard plus rushing games for Finest since opening night when Bellevue West held the great back to 61 yards. Hampton has now run for 1,487 yards and 16 TDs as Papio South heads to the Class A playoffs in a week.

*Dylan Kautz-Norfolk Catholic - Sophomore sensation ran for 201 yards on 20 carries in Catholic's wild 56-35 win over Wayne. The Class B sprint champion, who will now be known as the "Silver Bullet", hit paydirt from 1, 27 and 51 yards out as the Knights piled up 424 rushing yards.

Kautz, who also had a 94 yard touchdown run reduced to a 47 yard gain because of a holding penalty, raised his season rushing total to an unofficial 1,025 yards. Dylan has already rambled for 2,209 yards in 21 games and still has the playoffs to go this season and 2 years after that. Wow.

*Myles Vrbka-Norfolk Catholic - I really do not think this dude gets enough credit. Myles has been a two year starter at QB for Jeff Bellar's Knights and has done a very fine job directing this storied football program last season and this one as well.

In that Wayne victory, Vrbka connected on 9 of 13 passes for 144 yards and a couple of scores aerials to senior classmate Christian Prim. The 6-1, 175 pound Prim had TD receptions of 56 and 38 yards in the game and is just simply one of Class C-1's most dangerous receivers. No doubt about it.

In 8 games this season, Prim has grabbed 31 Myles Vrbka passes for 778 yards and 7 TDs. Not too many better than that in C-1.

Back to Vrbka, the steady senior has thrown for 1,148 yards and 13 TDs thus far in 2016 after tossing for 1,247 a year ago. Don't forget Myles Vrbka directed this team all the way to Lincoln in last season before losing a heartbreaker to Scotus.

*Carson Morgan-St. Paul - 6-4, 185 sophomore was an uninvited guest on Twin River's offensive side of the field in the Wildcats 41-0 thrashing of the Titans in Silver Creek last Friday.

Morgan made 4 tackles, but three of them went for losses. Carson thought he might make one more trip to the Titan backfield, then promptly blocked a punt for good measure.

Carson and the 6-2 Cats will host Central City (6-2) for the C-2, District 6 title Friday evening. Quite a turnaround for this St. Paul football squad in 2016.

*Zach Clausen-Lincoln Lutheran - Set a school record with his 341 yards passing in Lutheran's 31-21 win over Omaha Brownell-Talbot. Are you sitting down for this? That came with only 12 throws, but he completed 10 of 'em.

Zach's favorite target had to be Luke Kreizel, who grabbed half of those passes for another school record 227 yards. Kreizel scored on a 50 yard reception.

Oh, nearly forgot to mention that Clausen also rushed for 131 yards and scored on TD runs of 22 and 15 yards.

Did you know this young sophomore has already passed for 2,947 yards in his career?

*Columbus Scotus running backs - 12 different ball carriers had a ton of fun in the Rocks 49-17 win at Boone Central/NG. Sophomore Zack Beiermann led the way with 95 yards on just 3 carries.

Powerful Matt Strecker also had 95 yards but it took him 4 carries to hit the mark.....you're excused Matt. Evan Chohan chipped in 65 yards, freshman QB Tyler Palmer got into the act with 64 ground yards and his classmate Eric Mustard ran for 52 yards.

Coach Tyler Linder and the defending C-1 State Champion Shamrocks need to win Friday at Adams Central and get some help to make the playoffs and defend that title.

*Wyatt Ehlers-Centennial - The 5-10, 165 sophomore had his second 300 yard passing night of the year last week against a good Cross County team. Ehlers torched the Cougars by completing 14 of his 28 passing attempts for 329 yards and 3 touchdowns in the 39-14 victory.

Would you believe this kid already has 17 varsity games under his belt? Last season as a freshman, Ehlers led his team to a 5-4 record, throwing for 973 yards and 8 touchdowns. Ehlers has already thrown for a gigantic 1,622 yards and 16 scores this season, leading Centennial to perfect 8-0 record.

Despite throwing 194 passing and rushing the ball another 76 times, Wyatt has only fumbled 4 times, losing only one. According to my stats, Wyatt Ehlers leads Class C-2 in passing yardage. Not too shabby for a sophomore.

*Landon Sweeney-David City - The 6-0, 175 senior had the breakout night he deserved last week in the Scouts 40-35 thrilling win over Conestoga.

I'm sorry, but I really feel bad for Sweeney and this David City Pub football team. Good god what a horrific schedule they have been forced to endure. So much of the time this nice school has been looked upon as the red haired stepchild, so to speak, in Class C circles. Why? Aquinas of course, and their phenomenal success on the gridiron. Much like Falls City high and Falls City Sacred Heart in the old days. Same deal.

What is truly amazing is the fact Landon Sweeney has run for 705 yards this fall and that coming against teams like Wahoo, Wahoo Neumann, Fairbury and Wayne. I mean, David City is getting blitzed by scores like 47-3, 48-0, 42-8, 56-0 and 70--6, yet Sweeney has powered his way for that many yards.

Oh, did I mention that Sweeney also has 62 tackles this season, of which 40 are solos.

All I can say is that I sincerely hope the Scouts locker room facility has a great trainer and a kickin' whirlpool. Landon deserves both.

*Alex Horky-Twin Loup - Simply another day at the office for the steamrolling junior. Horky ran for 162 yards on only 14 touches in the Wolves 58-0 frolic over Central Valley.

That yardage raises Horky's 2016 rushing total to a whopping 1,441 yards in 8 games. That's cruising along at a pace of 180 yards an outing for Mike Kozeal's 8-0 Twin Loup team.

I'll tell you something right here and now. Bob Jensen and I both agree this football team, which comprises athletes from Sargent and Loup County could very well get to Lincoln.

*Kaden Reimers-Palmer - 6-2, 180 pound senior quarterback taught the fellas from Nebraska Lutheran a little lesson on the meaning of "Dual Threat".

Kaden Reimers finished his regular season with 1,590 yards passing and 23 touchdowns with only 4 INTs. The on-target sharpshooter completed 62% of his 188 passes, which averaged 13.7 yards every time he connected with a Tiger receiver.

Kaden also rushed for 446 yards and another 9 TDs, made 53 tackles and intercepted 4 passes for the undefeated Tigers of Super Coach Nathan Glause, who guided his 8-Man All-Star team to a win last June in the Sertoma 8-Man All-State Classic at Hastings College.

8-0 Palmer is currently sitting pretty at #2 in those D-1 wild card rankings.

*The Perkins County Touchdown Twins (Derek Sis, Charlie Johnson) - This dynamic duo ran roughshod over Sutherland in the Plainsmen's 56-6 win over the Sailors. Sis ran for 198 yards on 16 tries and scored touchdowns on 53 and 50 yard runs.

I wish I could tell you how many yards these dudes have rushed for this season, but getting Perkins County stats is extremely difficult, for me anyway. Both Sis and Johnson could certainly be over a 1000 yards rushing as well as Perkins has done this season.

*Tyson Burr-Kenesaw - The Blue Devils needed all of his 173 yards on 36 carries to turn back Superior 40-34. The hard running junior now has 896 yards and 11 TDs for the year for Kenesaw, who has now won 5 in a row after dropping their first two contests to #8 Elm Creek and #6 Palmer (D-1).

So good to see Coach Craig Schnitzler back on the sidelines after suffering a heart attack a few weeks ago. Take care Coach!

*Cale Frahm-Superior - 18 carries for 203 yards and three touchdowns in that 40-34 loss to Kenesaw. Frahm has rushed for 633 yards for the 5-2 Wildcats, who dropped to the 8-Man ranks for the first ever this fall.

More from this blogger · Bobby Mills
Comments
View 3 comments
Note: The nature of the Internet makes it impractical for our staff to review every comment. Please note that those who post comments on this website may do so using a screen name, which may or may not reflect a website user's actual name. Readers should be careful not to assign comments to real people who may have names similar to screen names. Refrain from obscenity in your comments, and to keep discussions civil, don't say anything in a way your grandmother would be ashamed to read.
Respond to this blog