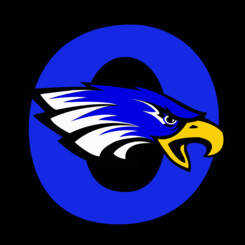 *Alex Thramer, Justin Appleby, O'Neill Football Team - A 30 yard touchdown pass from Thramer to Appleby with :43.8 seconds left in the game lifted the unbeaten Eagles to a monumental 26-21 win over powerful Norfolk Catholic.

And it was Alex Thramer that twisted a game winning pass away from Christian Prim on the last play of the contest to preserve that victory. That has been O'Neill football all year long under Head Coach Brock Eichelberger and his superb staff.

This football team does not dwell on statistics, but I will tell you that QB Alex Thramer completed 8 of 14 passes for 134 yards and 2 TDs. Junior Wyatt Liewer led the receiving corps with 84 yards on 3 receptions and a TD. Justin Appleby caught 2 of Thramer's throws for 32 yards and that sweet late game winning touchdown.

Brutal pounding Jake Young led the running game with 71 yards on 12 carries. Bailey Thompson added 40 yards on 12 touches for the Eagles, who had to protect the football with a bear hug every single time Norfolk Catholic closed in for a tackle. It was just plain physical.....unreal.

On defense, 175 pound linebacker Jake Young had a monster night with 11 solo tackles in the game. Man, I love the way this dude makes a stop.

I will tell all of Class C-1 this O'Neill football team is the real deal. I have watched football for 50 years, seen championship teams in the making and this group (family) of players has the formula for taking home the hardware.

This is no Cinderella team, ladies and gentlemen.

*Max Mason-Scottsbluff - The difficult to defend Bearcat running back rushed for 113 grinding yards on 25 carries in a 17-15 loss to McCook in the battle for Western supremacy. Those yards lifted his season rushing total to 1,063 yards (16 TDs).

As a starter, Max Mason has been stopped for under a 100 yards rushing only once in his last 9 games, and zero times in 2016, while averaging 8.3 yards a carry.

Even more astounding is the fact Scottsbluff runs the football 88% of the time and opponents know Max Mason gets the ball more than half of the time. He also has accounted for 58% of The Bluffs rushing yardage. Scottsbluff is the Millard North of the West.

This dude has to be a marvelous talent to gain that kind of yardage with the other team knowing you're gonna get the handoff.

Another thing this proves.......the amazing push that Scottsbluff O-Line gets. Trust me on that one sports fans, I've seen it first hand. I may be able to gain a yard and a half with those gentlemen blocking for me.

*AJ Hubner-Creighton Prep - Continued his passing yardage blitz by hitting 17 of 24 passes for 246 yards and 4 touchdowns in the Junior Jays 30-7 thumping of Papio South.

*Drake Gilliland-Mitchell - Despite his offense being throttled by Kearney Catholic, the hypersonic Gilliland still rushed the ball 39 times for 178 yards and a score.

Kearney Catholic got the best if the Tigers, but Drake Gilliland raised his season rushing total to 1,075 yards.

The Tiger junior has also made 35 tackles on defense and recovered 2 fumbles for 3-3 Mitchell.

This kid has bloodlines. You may recall his brother Drew, who ran for over 1,200 yards a year ago and possessed the same blinding speed and elusiveness.

*Trevin Rezac-Wahoo Neumann - This young man runs tough no matter who the Cavaliers are playing. Involved in their fourth #1 vs. #2 matchup up the season, the 190 pound senior blasted through Boys Town for 120 brutal yards on 20 carries and scored two crucial second half touchdowns in Bishop Neumann's 23-12 win over the Cowboys in The Corral.

Rezac's 17 yard scoring scamper with 6:37 left in the 3rd quarter, staked Neumann to a 14-6 lead. The Cav fullback then added some cushion with 1 4 yard TD crush with 9:17 in the 4th, giving Wahoo Neumann a commanding 23-6 advantage.

Rezac toughness reminds me of a punishing runner I saw for Millard North Friday...junior Noah Mick. These 2 guys in the same backfield would tear a defense to shreads.

It was Zeckser that made the difference in the Cardinals 14-0 victory over Hastings St. Cecilia. The elusive Adams Central transplant bolted for 208 yards on 33 totes in the huge C-2, District 7 win.

Zeckser increases his C-2 leading rushing total to 974 yards after 6 games. Hershey is the only defense that could hold the slippery Cardinal to under a hundred yards in a game this season. That will come in mighty handy in Doniphan-Trumbull's last 3 regular season games with Southern Valley (1-4), Gibbon (1-5) and Wood River (0-5).

And remember, Mark Zeckser rushed for 1,015 yards against a Class B schedule last season while playing for Adams Central. His success at D-T is no surprise whatsoever.

*Austin Stuhr-Heartland (Henderson) - Ripped Thayer Central for 245 yards on 34 tries as the Huskies buried the Titans 68-6. Stuhr hit the end zone 3 times with runs of 56, 1 and 12 yards in the blowout win.

That swells the Heartland senior's 2016 rushing total to 1,605 yards (24 TDs), which leads the nation right now according to MaxPreps.

And you thought I wasn't going to mention the boys up front that clear the way for the lightning fast Stuhr. No way, Jose'.

Striv-TV did an outstanding interview with Austin recently and I highly suggest you view it. Terrific young man.

*Devin Merkuris, Alex Watson, Jake Knott-Ralston - The trio of Ram runners were not very kind to the Platteview in Ralston's 49-7 romp over the Trojans.

Knott rushed for 92 yards on only 9 touches and also ran for a 36 yard TD, while his junior classmate Devin Merkuris went for 86 yards on 12 totes. Merkuris scored on runs of 2, 31 yards while Alec Watson ran 9 times for 70 big ones and scored on a 19 yard dash.

Merkuris leads the potent Ram rushing forces with 632 yards thus far in 2016. If you recall, the 5-11, 180 pound Merkuris punished Columbus with 176 yards on 32 carries in that heartbreaking 23-22 loss Ralston suffered two weeks ago.

*Dylan Egr, Josh Abbott-Wahoo - Egr returned 2 punts for touchdowns and Abbott was all over the place for the Warriors in the 60-0 whitewashing of North Bend Central.

QB Josh Abbott completed 9 of 12 passes for 100 yards, which included a 16 yard scoring pass to Zane Bennett late in the 1st quarter. The TD pass gave the Warriors a 34-0 lead with 3:45 still left in the opening stanza.

Abbott also rushed four times for 80 yards, with three of those going for touchdown runs of 58, 6 and 10 yards.

Dylan Egr has now rushed for 691 yards and 8 TDs for unbeaten and #2 rated Wahoo.

You just have to root for this football team, who has only made the playoffs 3 times in the past 32 years.

You know what kind of a football player the handsome Schwindt is, just knowing the kid rushed for 888 yards (12 TDs) last season for a 2-7 football team. He also caught 16 passes for 225 yards and a couple more scores. Shining star. Keep up the good work Zach.

Pinkerton ran 13 times for 101 yards, scoring 3 times. Quarterback Cooper Blum was a deadeye 9 of 11 passing for 165 yards and fired scoring tosses of 28 yards to Dillon Buss and 20 yards to Tyler Boller in the 49-13 win over the Cardinals.

Pinkerton is "Steady-Eddy" when it comes to carrying the football. He is good for around a hundred yards every outing, gaining 606 yards thus far and at least a touchdown a game, scoring 9 so far this season.

Blum is about as accurate as a high school QB can be, completing 69% of his throws for 951 yards and 8 TDs. Only dull mark is his 6 interceptions, but I like the positive side of this young man's game.

*Hayden Miller-Nebraska City Lourdes - All-State basketball star can play a little on the gridiron too. In the Knights 36-22 win over Johnson-Brock, Miller ran for 154 yards on 30 carries and 3 TDs (1, 9, 2 runs).

That raises Miller's 2016 rushing total to an unofficial 608 yards with 9 touchdowns.

*Garrett Egger-Cody-Kilgore - Really enjoy writing about these Cowboys because they just dearly love competing in every sport with so few athletes and such horrific distances to travel for games.

No, he didn't drive the bus.

Garrett raised his 2016 rushing total to 791 yards (15 TDs) for Landon Miller's 5-0 Cowboys, whom nobody has come close to this season.

*(Ethan Cox of Blair game 6 stats were unavailable at time of this release.)