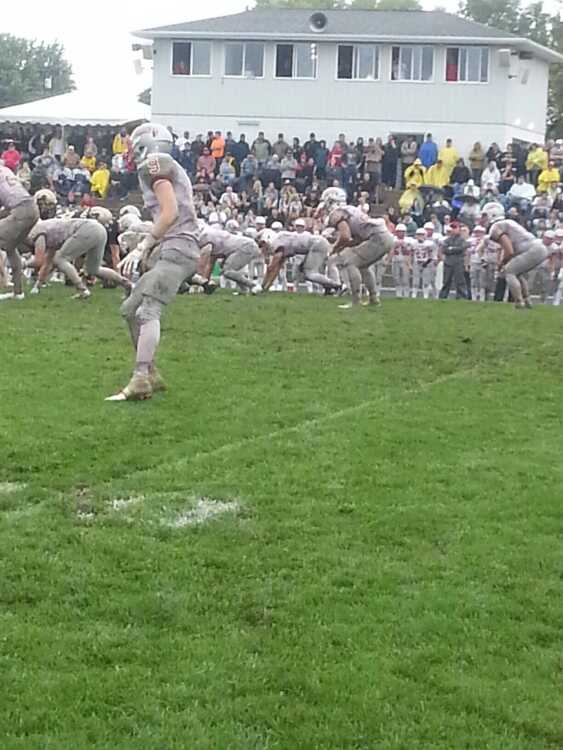 The Wahoo Neumann digs in for the next Aquinas play on a rain soaked David City field Saturday afternoon. *(photo by Bobby Mills)

Bishop Neumann is getting the hang of these # 1 vs. # 2 Class C-1 battles. The Cavaliers, who have been involved in Three of these games in 5 weeks, survived a one hour lightning delay and a determined young David City Aquinas football team, to pull out a 21-14 win on a rain soaked football field in David City.

Wahoo Neumann opened the season as the #2 rated C-1 team, then promptly knocked off pre-season #1 Norfolk Catholic, 14-7. Just a week later, the #1 Cavaliers beat #2 Columbus Scotus 34-14 on the road, before knocking off #2 Aquinas today.

Division One recruit Noah Vedral sealed the deal today when he piloted his Neumann team 73 yards down the spongy surface, finishing things off with a sweet 29 yard touchdown pass to star receiver Reid Jurgensmeier. The 6-5, 195 pound Cavalier WR climbed the ladder to pull down Vedral's toss, then used his basketball speed to score the winning TD with 1:52 remaining in the game.

The football game was exactly 7 minutes old when Aquinas stopped a Neumann drive on the Monarch 17. Several Monarch defenders burst through to block a 36 yard Thomas Benes FG attempt. A huge lightning bolt, immediately followed by a huge crack of thunder, then put a stop to any drives, as the game went into a 55 minute weather delay.

When play resumed after a virtual monsoon-like downpour, both teams struggled to move the ball, partially because of potent, swarming defenses, and partially due to the soggy, slippery field.

Hard running Neumann FB Trevin Rezac did manage to slam into the end zone (4 Yd run) for the lone first half score with 2:21 left in the 2nd quarter. The Monarch defense broke through again to block another Thomas Benes kick, this time the PAT try and Neumann went to halftime with a 6-0 lead.

Coach Tim Turman's Neumann crew was only 3 plays into the 3rd quarter when a snap sailed over punter Theo Blum's head into the Cavalier end zone. Aquinas lineman Kyle Ruth pounced on the loose ball for a touchdown, junior Trevor Siroky booted the PAT and Aquinas was on top for the first time, 7-6.

The Monarchs suffered the exact same fate late in that 3rd stanza when a snap sailed over their punter's head. No, it wasn't recovered in the end zone for a score, but 4 plays later Noah Vedral spotted 145 pound senior Ryan Dailey in end zone for a 17 yard TD.

With the clock showing 1:26 in 3rd, place kicker Thomas Benes ( pronounced Benish) pulled off a slick fake, then scooted in for the double extra point to give Wahoo Neumann a 14-7 lead.

Aquinas would once again capitalize on an errant snap over the Neumann punter's head halfway through the 4th quarter. 6 plays later, pile-driving FB Lane Napier crashed in standing up from the 2 yard line.

Siroky was true on the point after and these two legendary football programs were all square at 14 and this guy was licking his chops for a classic overtime finish.

Bishop Neumann had other ideas.

That is when Noah Vedral engineered the beautiful 73 yard drive, keyed by his own running, the powerful blasts up the gut by Trevin Rezac and the key receptions by the marvelous Reid Jurgensmeier.

The Monarchs did get one final drive opportunity, but the Neumann defense was all over Aquinas QB Gavin Rush like a swarm of angry killer bees, stuffing all 4 plays.

What an absolute Classic high school football game between two C-1 powerhouses that preach defense and smart offensive calls. I thought Coach Ron Mimick should be proud of his young Aquinas team for competing the way they did today.

And Bishop Neumann? It's mind-boggling to peer out to the field and see that kind of tremendous athletic talent in one place. Unreal. Same deal in Basketball.

Noah Vedral ended the wet afternoon by completing 14 of 20 passes for 178 yards and 2 TDs. The multi-talented star also rushed for 48 brutal yards on 21 carries and felt every defensive hit, especially by Lane Napier.

Trevin Rezac was the ground leader for Neumann, carrying the ball right into the heart of the Aquinas defense 22 times for 92 yards. You would have to search far and wide before finding two fullbacks on the same field as talented as Rezac and Aquinas dandy, Lane Napier.

Lane Napier, Gavin Rech and Kyle Petree looked outstanding as did the entire Tony Smith defense for the Monarchs. Napier was the clutch man on offense.

Bishop Neumann, survivor of the three 1 vs. 2 matchups, moves to 5-0 and will travel to dangerous Boys Town next Friday while David City Aquinas, who falls to 4-1, will face winless David City Public (0-5) next week on this same field.

This Classic, ladies and gentlemen, is what high school football is all about. Games like this linger in your mind for many years. Like a world class chess match, two great coaches with highly disciplined teams locked up in a back and forth battle that will not soon be forgotten. Thanks for the memories, Gentlemen.