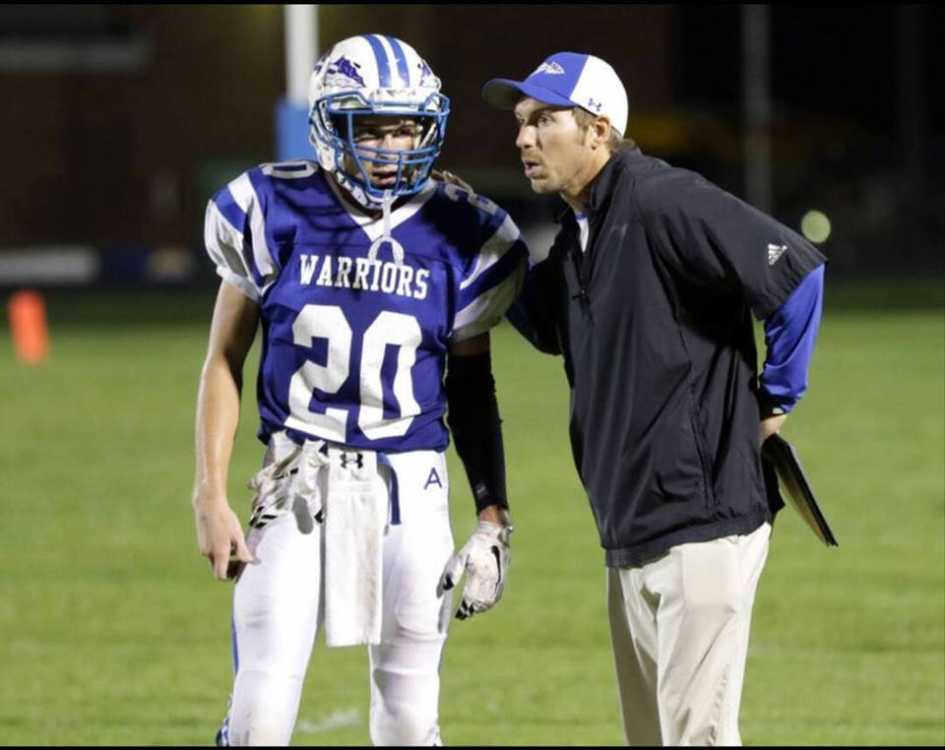 Arapahoe sophomore QB Gentry Anderson maps out the next play with his head coach. This dude is good.

And now our 3rd set of Friday Night heroes. I just cannot foresee anything less than three parts to these salutes. Every player deserves a mention if an outstanding performance occurs.

My only regret is not mentioning the linemen up front that allow these players to make the Heroes list. The HOGS, baby!

This isn't the first time young Gentry Anderson has posted number like this. In a season opening 72-66 crazy win over Axtell, Anderson had himself a career night.

Gentry through 11 passes and completed 5.....all for touchdowns. When Gentry called his own number to run the football, he absolutely tore through that Axtell defense, rushing 31 times for 301 yards and 3 more TDs. His scoring runs covered 5, 1 and 45 yards in the win.

So, in just 3 games, Anderson has thrown for 236 yards and 8 TDs and carried the pigskin 81 times for 678 yards and 9 scores. On defense, Gentry has 21 tackles, 2 interceptions and 3 pass break-ups.

Last year as a freshman, Anderson alerted the 8-Man football world he was going to be a dual-threat QB. In the passing department, 49 of 88 passes (65%) for 647 yards, 8 TDs and only 1 interception.

Standing at 2-1 thus far, the only loss coming to powerful Blue Hill (24-18), coach Dustin Kronhofman and Gentry Anderson will attempt to get Arapahoe into the playoffs for the 15th consecutive year. Last season the Warriors limped into the postseason with only 14 healthy players.

*Cade Elwood-Millard North - The Millard North QB is starting to get in that Mustang offensive rhythm that Freddy Petito demands from his quarterbacks.

In the 17-12 Mustang victory over Creighton Prep, Elwood rushed 20 times for 134 yards and a TD. He also nailed 5 of 8 passes for 94 yards and another touchdown.

Elwood's rushing yards were critical in that Prep victory, considering the fact FB Noah Mick was held to just 58 yards after rushing for a fat 221 big ones the week before. Cade's 134 rushing yards were 52% of Millard North's ground game in that 17-12 win.

Cade Elwood has developed into a dual-threat quarterback through his first 4 games in 2016 with 369 yards through the air and 345 yards on the ground. The Mustangs will need that going forward.

*Wyatt Hamer and Weston Johnson-Battle Creek - Fremont Bergan was "up a Creek" when Coach Andrew Carlson decided to turned these two men loose on them.

Thus far, Wyatt Hamer has torn 'em up in Class C-2 with 853 yards rushing while Johnson has contributed 343 yards in a backup role.

*Tate Mazour and Tom Pfeiffer-Doniphan-Trumbull - Senior field general only attempted 8 passes in the 41-0 romp over Tekamah-Herman, but connected on 5 of those, Three going for TDs.

On the receiving end of all 3 scoring tosses was 180 pound senior Tom Pfeiffer.

Mazour and Pfeiffer have become a deadly pass/catch duo for the 2-2 Cardinals. Pfeiffer has grabbed 15 of Mazour's aerials for 273 yards and 4 TDs thus far in 2016. That ranks 3rd in Class C-2 and Pfeiffer isn't even D-T's leading pass receiver.

Doniphan-Trumbull QB Tate Mazour, who is only bested in C-2 passing yardage by Central City's Will Wagner, has completed 55% of his 101 passes for 865 yards and 10 TDs with only 3 interceptions.

Throw in Marc Zeckser's 653 rushing yards (2nd in C-2) and you ask yourself "why in the world is Doniphan-Trumbull only 2-2? Could it be the fact that the Cardinals two losses were to #3 rated Sutton and 7th rated Hershey? Both are currently unbeaten.

For the year, Alex has 727 yards rushing with 13 TDs and a whopping 66 tackles on defense. I wonder if he could whip Coach Mike Kozeal in arm wrestling?

*Hunter Friend-Fullerton - Okay, where did this guy come from, Coach Ryan Haughton? The 5-9, 180 pound junior has ripped through Fullerton's first four opponents for 676 yards this season.

In last week's 60-16 romp over Wausa, Hunter Friend ran for 205 yards on 30 totes and scored 3 times. Fullerton, who returned only 2 starters on both sides of the ball, is currently 4-0 on the season, but faces stiff challenges in District play in Osceola and perennial power Humphrey St. Francis later in the season.

Bright future for those Warriors!

Cayden Owens and Tori Huffman-Burwell - The junior QB and senior RB helped the Longhorns rebound quite nicely from the shocking loss to Palmer a week ago.

The junior signal caller also decided to take off running 9 times in the win, running for 157 yards. Cayden reached the end zone on 4 of those totes, scoring on 5, 55, 29 and 4 yard runs while averaging 17.4 yards a carry.

Meanwhile, Hoffman carried the rushing load by toting the ball 27 times for 166 yards. Hoffman hit paydirt from 6, 32 and 3 yards away and made 7 stops on defense. Tyler Gideon led all Burwell tacklers with 12 crunches.

Thus far in 2016, Ephroen Lovato has rushed for 558 yards and 10 TDs. Remember, he's the Big guy. Gonzales, the little dude, has made a whopping 59 tackles, picked of 2 passes and pounced on a fumble in 4 outings. Hmm.

*Tysen McDowell-Minden - 6-1, 220 pound senior has been as steady on both sides of the ball as it gets. Plays center on offense and tackle on defense, averaging 7.5 stops per game. McDowell has also recorded 2 sacks for the rejuvenated Whippets.

Neat thing about this Minden squad is the fact they ended a 24 game losing streak with a win a 6-0 win over Gibbon in week two.......and haven't been beaten since.

Life is good on the gridiron for these Whippets right now.

*Cole Schmidt-Hartington/Newcastle - This 6-0, 160 pound junior QB/OLB was everywhere in the Wildcats 68-28 spanking of Winnebago last week.

Schmidt completed 5 of 8 passes for 118 yards and 4 TDs, rushed 18 times for 200 big ones and five more TDs and made 6 tackles on defense while picking off 2 passes for kicks and giggles.

Schmidt has led Hartington/Newcastle to a 3-0 record thus far in 2016. The Wildcats are averaging 63 points a game and yet are not rated in the brutal Class D-1 ranks. Cole has certainly done his part though, throwing for 225 yards and 6 TDs, running for 473 yards and 9 more scores, while adding 20 tackles and three interceptions on defense.

Oh yeah, he also does the punting.

*Cody Thompson-Omaha Concordia - Ran 12 times for 111 yards and scored on runs covering 1 and 72 yards in the 22-21 win over Mount Michael. Thompson already has 571 yards rushing in 2016 and makes this list every single week.

Bastianos also caught 2 passes for 22 yards, ran in 4 double-point conversions, plus making 14 tackles on defense. The senior now has 477 rushing yards this fall.

*Drew Bipp-Falls City Sacred Heart - In a 60-18 win over Lincoln Parkview Christian, Bipp tossed touchdown passes of 12 and 57 yards to Sean Arnold, hit Austin Ahern with a 26 yarder, found Emerson Keithley for a 12 yard strike, and connected with Christian Harring for 13 yard TD pass. Harring also added a touchdown, scoring from 75 yards out in the romp.