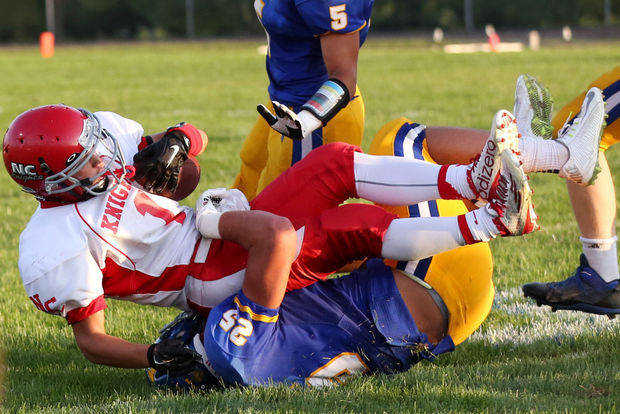 We now proudly our 2nd group of Friday Night heroes:

*Dylan Kautz-Norfolk Catholic - Man, woman and child did this lad unleash the fireworks among the lightning bolts off in the distance last Thursday in Norfolk. The Class C-1 state sprints champion put 'em in the aisles with his first half barrage that left Boone Central/Newman Grove on the short end of a 41-0 score.

The sophomore sensation shot out of the blocks immediately, dancing his way to 230 yards on 17 carries and 4 touchdowns. Kautz zipped in that Cardinal end zone from 1, 29, 46 and 22 yards out in that opening half. Little did he know at the time, there would be no more football played that evening. That gives Dylan an unofficial 574 yards after 4 games......well 3 ˝ really.

Jeff Bellar and Mark Hudson huddled, discussed the weather situation and the score with the officials, then reluctantly agreed to make the game official after a half. At the time there were just too many lightning bolts dancing around above, doing their best Dylan Kautz imitation.

Let's talk about Dylan Kautz for a moment. The youngster ran a sub :11.0 hundred meters plus a sub :23.0 two hundred meter dash as an 8th grader. Last season, many made the comment Dylan was a track guy playing football. Here is what that translates to in coaching or football expert lingo.

"Straight ahead (downhill) runner." "Is gone only if he gets to the edge. "Dislikes any form of contact." "NO HIPS." "Not able to execute quick cuts or plant and go moves."

Any logic to this theory? Maybe. I've seen it many times in my 50 years of watching high school football. Don't get me wrong though, no coach is going to kick a state sprint champion off his team regardless of all the above.

My take on Dylan Kautz? None of the above after watching him Thursday. Straight ahead runner with no hips? Far from it. Mr. Kautz made a huge jump on the "complete RB scale" in the Boone Central game. Good Lord!

Also remember, this kid is only a sophomore, is very intelligent, has all the tools and with some good fortune, will lead Catholic to a state title before he moves on. A frightening thought to opponents, Kautz will get a lot better as his career progresses.

Count me in as Vice-President of the Dylan Kautz Fan Club. Dylan's Mom probably owns the title above that.

*Payton Kinne-Grand Island - This kid was "in the zone" Friday against Lincoln East. As the Journal-Star so aptly put it: "Payton Kinne, the Man of Steal".

You see, Kinne, the 6-0, 180 pound senior WR/DB, pirated Four Lincoln East passes and hauled in 6 receptions for 122 yards on offense, scoring 2 TDs in the crucial 21-14 Islander win over the Spartans.

Kinne, who came within one interception of tying the state single game record for picks, already has 371 yards and 6 receiving TDs in 4 games for Jeff Tomlin's forces. My friend Coach Tomlin made this comment following Kinne's performance. "It's one of the best individual performances I've ever witnessed in 30 years." Tomlin should know, trust me, he's may well be the finest defensive coaches in the state...maybe the best.

And just for good measure, Payton Kinne's 55 yard TD catch with 3:42 left in the contest proved to the the game winner.

Kinne will be a huge weapon when the Islanders visit #1 Omaha North Friday in a 4:00 start at Kinnick Stadium.

*Aquinas defense, rushing game - Laid the golden goose egg on defending C-1 Champion Columbus Scotus last Friday with a resounding 29-0 victory. I can just see defensive coach Tony Smith, who is right up there with Jeff Tomlin, urging his "D" forces to lay a zero on the Rocks.

The Monarch pass rush limited freshman QB Tyler Palmer to just 2 of 8 passing for 8 yards. Meanwhile, Ron Mimick's offense was methodically grinding out 343 yards on 65 carries, wearing down that Scotus "D" in the process.

The big one comes this Saturday at 1 O'Clock in David City when #1 Wahoo Neumann travels to meet the Monarchs. It does not get any better than that, folks.

That Centennial Conference can play a little football too, eh?

That output elevates the whirlwind senior runner to the top of the Class C-2 rushing charts with 818 yards with 10 touchdowns. Drake Gilliland brings his talents to Kearney in 2 weeks when the Tigers face Kearney Catholic on September 30th.

*Milton Sargbah-Omaha - One of the most explosive backs in the entire state, Sargbah is money in the bank for at least 2 TDs and whole bunch of yards every game for the Vikings.

In the easy 42-0 win over Lincoln Northeast, Milton ran for 172 yards on 11 carries and scored.....you guessed it....2 TDs, both coming from long distance. The lightning quick junior broke it from 79 and 55 yards in the romp over the Rockets, increasing his 2016 rushing total to 632 yards and 8 touchdowns.

Keeping Sargbah healthy to play the "lightning" role to complement the Jordan Strong/Zander Gray's "thunder" will make Omaha North a very solid choice to claim the Class A title this fall.

*Trevin Rezac-Wahoo Neumann - Fantastic senior bolted for 123 yards and 3 scores in the Cavaliers 49-10 win over Milford-Dorchester last Friday. Rezac scooted in from 63, 19 and 8 yards out as Neumann cruised to a 35-3 first quarter lead.

Rezac has 4 receptions for 58 yards. Three of those resulted in touchdowns. He also has 28 tackles and 1 fumble recovery.....that coming against Scotus, of course.

*Koby Dillon-Palmyra - 5-10, 150 pound quarterback only attempted 6 passes, but 4 were on the money for touchdowns in the Panthers 30-6 win over Elmwood-Murdock.

Dillon's 6 completions were good for 195 yards and propelled the Panthers to their first win of 2016. Koby's favorite target had to be junior Drew Bessy, who hauled in scoring passes covering 90 and 31 yards. Bessy also had a 79 yard pick 6 in the win.

*Mitchell McWilliams-Syracuse - 140 yards on 21 carries and 10 receiving yards in the Rockets 12-0 win over Raymond Central.

*Wyatt Ehlers-Centennial - 5-10, 165 pound sophomore QB completed 11 of 18 passes for 242 yards and 3 TDs in the Broncos 34-0 win over Malcolm. Meanwhile, the Centennial defense was holding Malcolm to 5 first downs.

Ehlers is directing this 4-0 Centennial offense like a seasoned veteran, completing 53% of his 88 passes for 675 yards and 9 touchdowns with only 1 INT. this season. Ehlers has also rushed for 133 yards and 6 scores with nearly every 5th carry going for a TD.

With senior Ryan Schlueter supplying the rushing power and Wyatt's classmates Reese Foreman and Jackson Hirschfeld catching his passes, this Bronco team could very well make some noise in the postseason. It is within the realm of possibility Centennial could get through the regular season with only one loss.

Very cool thing about this game for the Bolts was the fact they trailed PLVS 28-14 with 6 minutes to go in the game. Workhorse Wordekemper's touchdowns were Pius X's last two scores in the game, demonstrating how valuable this dude is to his team.

The Thunderbolts are 4-0 thus far in the Class A wars, but have District 4 games remaining with Lincoln SE, Lincoln East, GI and Omaha North. I'd like to see this team make the playoffs.

*Finest Hampton-Papillion La Vista - Ole' Finest may be the finest in Class A before it's all in the books if he runs like he did against Lincoln SW. The 170 pound speedster scored all 4 TDs in Papio's 27-7 win over winless Southwest.

*Jaylin Bradley-Bellevue West - This gentleman really ran hard-nosed last Thursday against an awful tough Millard West "D". Bradley gained 123 hard earned yards on 25 carries in the Thunderbirds 21-14 win over the Wildcats. Jaylin had a big 38 yard pass reception in that game too.

The senior standout raised his 4 game rushing total to 786 yards heading into a home meeting with Norfolk this Friday. The rest of Bell West's schedule looks very manageable, with only the regular season closer vs. Omaha Burke looking like a real threat.

*Ray Nierman-Harvard - An unlikely hero in the Cardinals 30-27 Six-Man triumph over a very good Wilcox-Hildreth team.

With the ball on the far right hash, 24 yards away, Nierman nailed that baby right through the uprights to win the ballgame. Whoa man, did you say WIN the game?

Yessir, i certainly did. You see, a field goal in 6-Man football is worth 4 points.

That staunch Harvard defense also held AJ Jenkins, a 1000 yard rusher as a Freshman, to 123 yards on 20 carries and No touchdowns.

A word of warning to other 6-Man teams (excepting Riverside of course). Any team Scott Trimble coaches will be a tough customer when the time comes to play that bunch...aka Harvard.