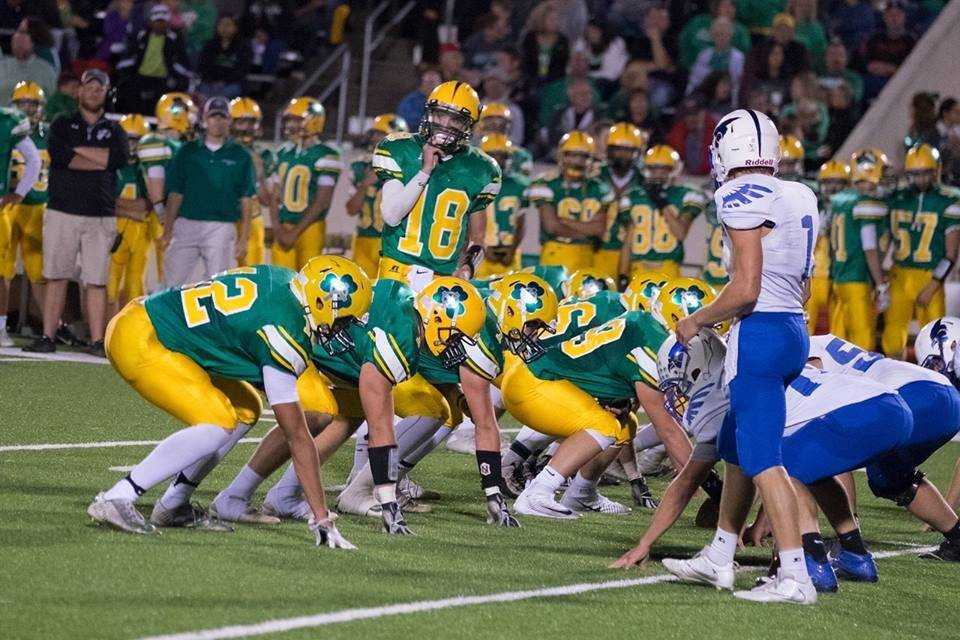 Part three of our Friday Night Hero salute is led by a freshman quarterback that plays for the defending Class C-1 state champions. Talk about pressure.

Must not be a big deal to this youngster the way he has performed the first 3 weeks of the season.

*Tyler Palmer-Columbus Scotus - 6-0, 165 pound freshman signal caller was pressed into action when the Shamrock's projected starter broke his hand on a defender's helmet on a passing attempt follow through in pre-season practice.

Friday night in a home clash with Pierce, Palmer's 3rd start, the cool and calm freshman had a hand in every one of Scotus' touchdowns in the Rock's 39-26 win over the Bluejays.

Palmer attempted only 9 passes but completed 7 of them for 209 yards. Tyler's first 3 passes all went for touchdowns.

Tyler blasted for another score from a yard away following a 72 yard pass to Tate VunCannon. Palmer then skirted in from the Pierce 10 for the 6th TD of the game.

I will tell you, this youngster is as poised as they come for a 9th grade varsity football player. Who would have ever imagined a freshman would be the field general for a Class C-1 powerhouse like Scotus?

*Quentin Moles-Bloomfield - The 5-11, 170 pound runner would be your leading rusher in the 8-Man ranks, which is nothing new for Bloomfield, who cranks out RB's like Coca-Cola does products.

When the Bees stung a pretty dang good Randolph team 62-42 last Friday, Moles made shambles of the Cardinal defense with 332 yards on 33 carries and 6 touchdowns. He also made 8 tackles in the contest.

Can anyone stop this Omaha North team?

*Tyler Chadwick-Omaha Burke - What do you for an encore after you throw for 394 yards and 4 touchdowns against a storied program like Creighton Prep?

If you are a sophomore like Chadwick, you may relax or perhaps follow up with a businesslike 14 of 21 for 198 yard night with almost as many TD passes (3). That is exactly what Tyler Chadwick did in the Bulldog's convincing 38-21 win over Norfolk last week.

Not only has the sophomore led Burke to a 3-0 slate, but his 704 yards are among the passing leaders in Class A. Coupled with the fact he is hitting 64% of his 56 throws for 704 TDs with only 2 picks, you have a very poised young man at the throttle.

Not the first time that's ever happened at Omaha Burke. The name Jimmie Forsythe ring a bell?

Remember, I just told you Tyler Chadwick threw for 394 yards against Creighton Prep. Well, in that 38-37 loss to the Bulldogs, Hubner topped that performance with a 20-36 for 411 yard night. AJ is hitting at a 58% clip with his aerials and has thrown for 9 TDs in three games.

Some pretty nice quarterbacks emerging in Class A after the pre-season report looked rather bleak. You knew it had to happen.

*Grant White-Neligh-Oakdale - Yet another Quarterback. This dude will end up with several records before his senior season comes to a conclusion in 2016.

Thus far in 2016, Grant White has thrown 48 passes and completed 41 of them. Not a misprint. He has 781 yards and 12 TDs with NO interceptions after three games. Now for the good stuff.

Okay, so Nate Most's career passing yards record of 7,825 yards when he was playing for Giltner is out of reach, I think this dude is a heck of an 8-Man quarterback.

*Hoss Smith, Evan Reinert-Oakland-Craig - In a 38-22 win over unbeaten Crofton, Smith rushed 21 times for 107 yards and a TD and added 8 tackles. 352 ground yards in three games for ole' Hoss.

Reinert has thrown for 437 yards this season with 6 TDs and no interceptions.

*Lane Edis-Mullen - Doggone it, some games you just do not get very many carries. It's called being nice to you opponent.

In Mullen's 64-6 win over Anselmo-Merna, Edis toted the pig only 8 times, but still managed 143 yards and 2 touchdowns. The 160 pound sophomore also made 12 tackles on defense, 11 of which were solo stops.

Lane, I saw your Pop play in that 1990 D-1 Championship against Kenesaw. Dad ran over, around and through the Blue Devils in that 44-40 thriller. Knocked my socks off.

*Alex Horky-Twin River - Alex "I ain't no porky" Horky was at it again in the Wolves 62-8 thrashing of Stuart. Horky ran for 231 yards on 15 touches and 4 TDs in the game while making 5 stops on defense.

That's a ton of wins Coach Hingst. You are highly revered in the coaching ranks in Nebraska High School football and your named will be etched in stone as one of the best to ever coach the game in the Cornhusker state. Cheers!!!!!!

*Matt Masker-Kearney Catholic - Good lord Matt, take it easy on these Western teams paying a visit to play the Stars.

The Stars are 3-0 with a daunting trip to Garden Plain, Kansas staring them in the face Friday. That is north of Wichita, dudes. I hear that bunch has a QB that reminds folks of former Boone Central/NG dandy, Wyatt Mazour. Oh my.

*Brice Broz-Wilber-Clatonia - The 5-10, 175 pound senior must have figured it was time to get some targets against Elmwood-Murdock. After hauling in only one reception in the first two games, Broz caught 6 passes for 114 yards. Three went for scores covering 17, 43 and 16 yards in the 49-0 shellacking.

Broz also ran in for a 2 yards score in the route. 3 rushing touchdowns, 3 receiving TDs in three outings......not bad Brice.

*Caiden Groff-Elkhorn Mt. Michael - Groff ran for 150 yards on 20 carries, caught a 15 yard scoring pass and made 10 tackles in the Knights 14-6 win over Nebraska City.

*Payton Allen-Ainsworth - Despite a 48-18 loss at Hemingford, Allen still managed 157 yards on 16 carries, two touchdowns and 7 tackles for Ainsworth, playing 8-Man football for the first time this season.

Who is the best Dual Threat in 11-Man football?

My choice would be Blair's Ethan Cox, who has 632 passing yards and 333 yards rushing. That equals 965 total yards folks. Good enough for me.

Omaha Christian's Mason Dinklage has 432 passing and 232 running for 664 total yards. Don't discount O'Neill St. Marys QB Josh Cuddy either. Cuddy has thrown for 298, run for 361 for a total yard figure of 659.

You might say Plagge's yards mean the most thus far, for the simple reason GACC is rated #1 in Class D-1.