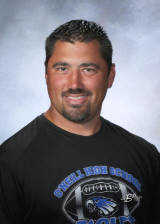 Did the stars ever come out Friday night. Most were individual performances but there is one salute in Part 1 that include the entire offensive and defensive units as well as the coaching staff. Couldn't be helped in this case.

Let's get this baby rolling right now. Lots of outstanding performances to highlight.

*O'Neill Football Team* - Yes, both sides. If there was a football game plan that approached perfection, the 38-0 victory victory the Eagles had over unbeaten and ranked Boone Central/NG had to be close.

8 different backs carried the ball to combine for 328 yards rushing (6.7/carry), most of which were right into the heart of the Cardinal middle.

On the defensive side, the Eagle "D" pitched their third consecutive shutout of the season against a very good Dylan Gentrup-led Boone offense.

Twenty different players had either a tackle, assist or both. Jake Young led the way with 9, Shayne Campbell followed with 7, and Jason Halbeck added 6.

Campbell and Heiser each recovered a fumble, while Tyler Regan and Bailey Thompson each caused one.

.......and a word of advice to O'Neill players. Do not get in a wrestling match with your head coach. Brock Eichelberger was one of the roughest, toughest football players I ever saw in my entire lifetime. 1,346 yards in 1992 and 1,587 yards in 1993 for a storied Beemer team. All those yards plus a gazillion tackles.

Brett Kaczor's 1,207 yards at Ewing in 2008 wasn't bad either, but if I needed a bodyguard Coach Eichelberger would be the choice.

*Palmer Tiger Offense* - How does knocking off the No. 1 team in Class D-1 grab you? Well, Nathan Glause and his 4 years in the making, Palmer football team did just that Friday.

The Tigers outscored Burwell 42-38 in a game that sent shockwaves through the 8-Man football world. The win by Palmer only mildly surprised me. I could see this coming when these young men were freshman.

Remember one thing when it comes to football in Palmer. Nathan Glause never wastes talent. This guy knows his stuff and how to use what he has to build a powerhouse football program.

In that Burwell win, senior QB Kaden Reimers completed 20-43 passes for 326 yards and 5 touchdowns. Senior Chad Doncheski led the reception parade with 5 catches for 130 yards and 2 TDs. Michael Wolfe hauled in 10 passes for 96 yards a 2 scores. Chad Samuelson had 3 receptions for 52 yards and a score, while Hunter Reimers also grabbed 3, good for 48 yards and a receiving touchdown.

On defense, as usual, the tackling machine Hunter Reimers made 23 stops, 2 for losses. Dominic Donahey added 11 as did junior Spencer Wichman. Kaden Reimers was in on 10 stops for the Tigers.

I kid you not about Hayden Reimer being a tackling machine. 438 stops in his 30 game career thus far and they keep accurate stats up there in Nathan Glause country. That's nearly 15 tackles every time Mr. Reimers takes the field.

*Arnijae (AJ) Ponder-Omaha Burke - 6-0, 190 pound athlete from Burke is stronger than you think, benching close to 300 lbs. His strength was on display in the 'Dogs 38-21 win over Norfolk.

Ponder ran 19 times for 130 yards and hit paydirt from 1 and 3 yards out in a win that kept Burke in the unbeaten ranks. Ponder also recorded 3 tackles on the night. Teammate Josh Baker pulled in 10 of sophomore Tyler Chadwick's 14 passes for a fat 153 yards and TD catches of 8 and 21 yards.

Is this Omaha Burke better than it's #7 rating?

*Jose Guzman and Kaleb Johnson-Centura - In a 46-0 win over Bayard, quarterback Guzman ran 26 times for 206 yards and an 11 yard touchdown run, while Johnson bolted for 235 big ones on 30 carries with TD runs of 18, 19, 4 and 4 yards. The Centurians ground out 541 yards rushing on the night. School record, Larry?

Guzman now has 441 yards rushing for the year with Johnson not far back with 428.

Centura is 3-0 right now for the first time since 2003. Yes I know the combined record of their first 3 opponents is 0-9, but this is huge for Larry Baker's program there.

By the way, Baker is a great coach and a terrific human being as well. The only record I hope Centura didn't set was the 20 penalties for 205 yards in that Bayard game. They borrowed a page from the Pelini book.

*Kale Kleinschmidt-Bruning-Davenport-Shickley (BDS) - Yeah, this is the dude that played a huge role in the Eagles championship run a year ago. The 5-8, 170 pound senior was up to his old tricks again in the Eagles 42-16 win over a very good Tri-County team.

Kleinschmidt ran for 171 yards on 22 carries from his new QB slot and scored on TD jaunts covering 25 and 49 yards. Kale also hit Thomas Mick with a 56 yard TD strike and nailed big 6-1, 220 pound Noel Glines with a 7 yard scoring pass.

BDS, who won Class D-1 in 2015, have dropped down to D-2 this fall and are rated #2 behind Humphrey St. Francis in the latest Omaha WH ratings.

*Hunter Spier-Norfolk Lutheran High NE - Man, this cat can fly. His 40 was listed at 4.6 but I'm wondering if it is quicker than that now? Home run threat for sure.

After just 3 games, Hunter Spier has 532 yards and 6 TDs. So great to see considering his season was cut way short last year because of an horrible injury.

By the way, Lutheran High NE and Shelby/RC combined for 1,002 yards of total offense in that game. I pity the crew who had to officiate that baby. Bonus check in the mail, fellas?

Thompson, in his first season in that starting QB role, has been accurate on 36 of his 48 pass attempts, good for 504 yards. Prep football fans, that is 75%. Big time, man.

RB Preston Dibbern added crucial rushing yards in the game by escaping for 126 yards on 21 carries. This Friday, two of the best backs in Class B will lock horns when Max Mason and his Scottsbluff mates visit Aurora. I'm there baby!

*Finest Hampton-Papillion LV South - Hampton was the Finest in the Titan's hard earned 34-27 win over Lincoln High. Hampton rushed for 171 yards on 25 totes against the Links, scoring a couple of TDs in the process.

*Logan Tiensvold-Chadron - Cardinals put it all together in a 41-13 win over Broken Bow, forcing a seemingly longer bus ride back to The Bow for the Indians.

Tiensvold ran 20 times for 136 yards, scored 2 TDs and nabbed receptions for an additional 56 yards. Logan also made 8 stops on defense and returned a fumble 27 yards for a score. Strangely enough, Tiensvold has back to back rushing games of 136 yards on 20 totes, giving the 5-11, 190 pound junior 314 yards for the year.

*TJ Davis-Boys Town - 10 of 17 throwing for 142 yards and 5 touchdowns in a 46-7 romp over outmanned Louisville. Let's mention who was on the receiving end of TJ's TD passes, shall we?

Kyree Hazleton caught an 11 yarder, Dylan Randall pulled in one that covered 42 yards, Mo Druliner caught the longest one covering 73 yards and Cordell Cade led 'em all with TD catches of 43 and 20. Man this Boys Town is is scary..........always.

*Dylan Egr and Jake Ruzicka-Wahoo - Studs came to play in the Warriors last minute 23-22 win over perennial power Norfolk Catholic, who must literally hate that road to Wahoo.

Egr ran for 168 yards on 23 carries and scored on a 41 yard run while big, powerful Jake Ruzicka (Ru-zeech-ka) caught 6 passes for 66 yards, one of which was a 5 yard TD reception.

The staunch Warrior defense held sophomore All-State RB Dylan Kautz to 26 yards on 25 carries, although Dylan brought a Wahoo kick back 99 yards for a score late in the game, making things tight.

*Tyler Powalski-Pleasanton - These young kids of Ricci Westland are growing up like the Palmer football team did. Powalski wasn't nice to Axtell, ripping the 'Cats for 171 yards on 18 touches, scoring TDs on runs of 40, 9, 40, and 23 yards. Powalski, a QB, also threw a 31 yard touchdown pass to Ryan Busch in the 78-28 win.

Powalski was also a defensive standout, recording 10 tackles. Oh.....Tyler Powalski is a 5-7, 150 pound sophomore and also is the defending Class D 120 pound division Wrestling champion, compiling a 35-2 record in 2015.

You have to feel good about this one because Banner had to fold their season a year ago due to lack of bodies and Potter-Dix has already forfeited on this season for the same reason.

So, here is how things have gone for Alexander thus far in 2016. Banner is drubbed 80-19 by Cody-Kilgore in the opener, yet the freshman QB runs for 222 yards on 30 carries. The next week, Arthur County lays a 91-13 pasting on Alexander and his mates, but Gage runs for 148 yards on 23 carries. Despite the horrible losses, the freshman has run for 724 yards and scored 7 TDs.

Can you imagine how this kid feels after those games? I hope they have a giant hot tub in Harrisburg for this dude. You have 10 seconds........tell me where Harrisburg is located? No peeking or cheating now.