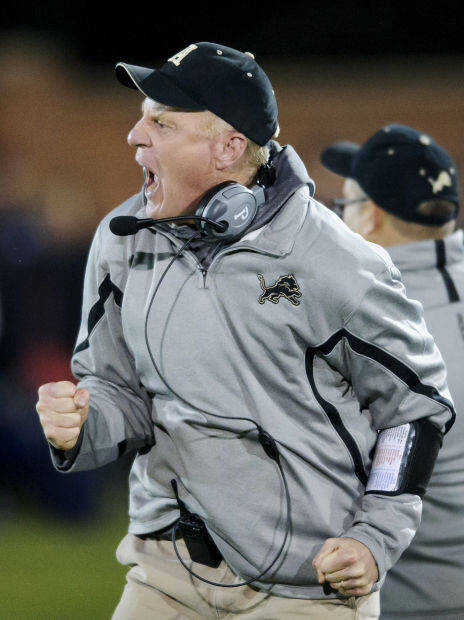 There are always two sides to a post game story.

Aquinas coaches chalked up the businesslike win over the Crusaders as a learning experience by a ton of young players who were replacing a wealth of graduated talent, coupled with the fine game plan GICC defensive coach Keith Kester devised to slow down their offense.

Aquinas, who had already posted two lopsided wins over Raymond Central and Pierce, may have relaxed a bit on this perfect weather night for football, or perhaps it was this 0-2 Grand Island Central Catholic football team just coming together as a defense after facing a couple of brutal teams (O'Neill and Kearney Catholic) to begin the 2016 season.

No matter what the reason may have been, the end result was another dominating performance by the Monarch "D" and an improved GICC defensive effort.

It was a night for the running the football for both teams, and there isn't a high school football team that does it much better than Aquinas. Tonight was no exception, as the Monarchs dented the GICC "D" for 392 rushing yards.

Aquinas did score on their opening drive, but could only muster a field goal after the Crusaders stiffened when the Monarchs reached their 10 yard line. The drive was a typical Monarch sustained move down the field, with two-time All-State FB Lane Napier and big play sophomore wingback, Andy Lyons, a speed demon leading the way.

The visitors settled for a 29 yard field goal from junior kicker Trevor Siroky, to take the early 3-0 lead which was the score as the 1st quarter ended.

Aquinas looked like they may blow things open when they cashed in on their next two possessions. Lane Napier scored the first of his 2 touchdowns on the night by blasting in from the GICC 2 yard line with 9:10 left in the 2nd. That scoring run was set up by a beautiful 55 yard run by Napier, stretching from the Monarch 38 to the GICC 7 yard line.

Lane Napier's 2nd touchdown of the half came on a sweet 35 yard draw play that developed after a Houdini-like fake by Monarch quarterback Gavin Rech, a 146 pound junior. The Crusaders were left frozen in their tracks as Napier scooted in nearly untouched for the touchdown.

Aquinas nearly had another opportunity to score prior to halftime following a short GICC punt that ended up on the Crusader 44. But Kester's defense stiffened and held the Aquinas at bay until the half ended.

The 3rd quarter was void of any scoring as the Crusaders were able to snuff out two Aquinas drives, one of which was halted with a Wyatt Gleason fumble recovery.

The Monarchs added a long distance TD run on the very first play of the 4th quarter when 5-6, 162 pound junior Nolan Maguire sprinted down the Monarch sideline for a pretty 44 yard scoring jaunt. Maguire made a terrific move following a couple of crisp blocks, then had clear sailing and scored, despite being caught at the goalline.

Central Catholic did hit the board with a buck ten left in the game when Aquinas suffered a rare miscommunication in their backfield. When the QB and RB collided behind the line of scrimmage, the ball popped loose, Wyatt Gleason then alertly scooped it, racing 52 yards to score, preventing the Monarch shutout.

Hard running Lane Napier led the Aquinas ground game with 154 yards on 19 carries (2 TDs). Junior Kyle Petree, who did not enter the game until 13.6 seconds left in the 3rd quarter, ripped off 69 yards on only 8 touches. Andy Lyons added 61 yards on 8 carries while 5-4, 128 pound Matt Nadrchal chipped in with 58 tough yards on 12 totes.

That stout Monarch defense, dominated by underclassmen, limited Central Catholic to 74 yards rushing and a minus 10 yards passing on the night. Nine of the Crusader running plays were for negative yards.

Rugged 190 junior Jonah Bales led the Crusaders in rushing with 47 yards on 12 carries and sparkled on defense as well.

The aerial game was nearly invisible tonight with Aquinas QB Gavin Rech completing 2 of 4 passes for 12 yards. Crusader QB Aiden Anspauch was limited to 1 of 5 throwing for a negative 10 yards.