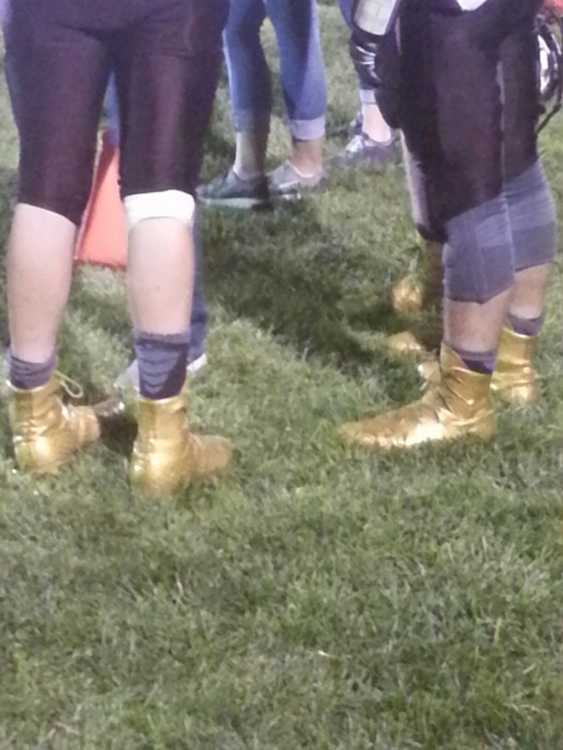 Was it the gold shoes of St. Edward players Brayden Olson and Evan Roberts that propelled the Beavers to their win Thursday?

No. 2 rated St. Edward rode the running of senior Brayden Olson and outscored Grand Island Heartland Lutheran 42-12 in the middle quarters to pull away for a 62-32 victory in a battle of unbeaten 6-Man football teams Thursday evening in G.I.

Olson, who rushed for 348 yards a week ago at Harvard, eclipsed the 300 yard barrier again tonight by rambling for 304 yards on 28 carries. The swift, hard running Olson also scored 6 touchdowns, 4 of them coming after the Beavers other All-State RB, Keenan Rasmussen left the game with a displaced kneecap early in the contest.

The Beavers racked up 443 yards on the ground, which is not all that common in 6-Man football. However, it has been the bread and butter of success for Coaches Darren Luebbe and Donnie Baker, who guided the Beavers last season.

While Olson and company were doing the damage offensively, the Beaver defense was keeping Heartland Lutheran's ace quarterback Jacob Simonson in check all night.

Simonson, who threw for 2,370 yards and 33 TDs a year ago in the 8-Man ranks, was hounded all night, mostly by 6-3, 200 pound junior Jesse Osantowski. Generally in 6-Man football only one defensive player chases the quarterback due to the fact all 6 offensive player are eligible to catch a pass.

That fierce pass rush, coupled with the outstanding pass coverage applied by Olson, sophomore Trevor Rasmussen (2 interceptions) and Jonah Micek (Pic-6) to name a few, kept the high scoring Red Hornets scoring down to lower than half their output compared to a week ago.

It didn't take long for St. Edward to hit the board in this one. Brayden Olson was off to the races on the very 1st play from scrimmage, bolting 50 yards for a score. But it took Red Hornets only 3 plays and 30 seconds to respond with a score of their own.

Simonson then spotted Zack Staehr for a 19 yard aerial TD that gave Heartland Lutheran their only lead of the night, 13-7 with 3:26 left in the opening stanza. A 13 yard Brayden Olson TD run would tie things at 13 as the 1st quarter drew to a close.

St. Edward then reeled off 22 straight points to extend their lead to 35-13 before Red Hornet QB Ivan Messersmith tossed a 30 yard TD strike to Gavin Olson. The score pulled Heartland Lutheran to with 35-19 at intermission.

St. Edward still couldn't shake the speedy Heartland Lutheran team until late in the 3rd quarter. Following Olson's 5th rushing touchdown of the night, a 20 yard dash, Red Hornet QB Jacob Simonson found some running room, weaving in and out of the Beaver defense for a sparkling 41 yard touchdown run.

That closed the St. Edward gap to 42-25 with 4:30 left in the 3rd, but when Brayden Olson swept 49 yards for a score, followed by a killer 59 yard fumble return by speedy Jonah Micek, Heartland Lutheran trailed by 55-25 as the 3rd quarter drew to a close, and could never recover.

One of the storylines to this game was the ability of St. Edward's physical style of football to eventually wear down the Heartland Lutheran defense. It was evident some of the Red Hornet players were tiring as the game progressed, but I was still very impressed by the blocking and tackling skills of the Heartland Lutheran, something that has been absent in recent years.

And as Beavers head coach Darren Luebbe stated, his team had to adjust offensively to the loss of Keenan Rasmussen. Insert 6-4, 300 pound junior Dylan Dykes into that Up Back slot and you have a different look.

It took big Dylan only one missed block on his first play in the game to make amends and the Red Hornets payed the price as his crunching blocks and pancakes sprung Olson loose for more big chunks of yardage. The big junior even plowed in from the 5 to score the Beavers final TD of the night.

Keenan Rasmussen added 118 yards on 7 carries before exiting with that kneecap injury.

Heartland Lutheran had a balanced attack with QB Jacob Simonson hitting 14 of 32 passes for 176 yards and 2 TDs. Fleet-footed TJ Williams came in late in the 4th quarter and still led the Red Hornets in rushing with 67 yards on 5 carries. Simonson followed with 61 yards, also on 5 touches for the home team, that ended the night with 146 rushing yards to go with their 201 yards through the air.

Jeremiah Reeser was also impressive on both sides of the ball for Heartland Lutheran, who played pretty sound football and looked to fit the 6-Man game very well.