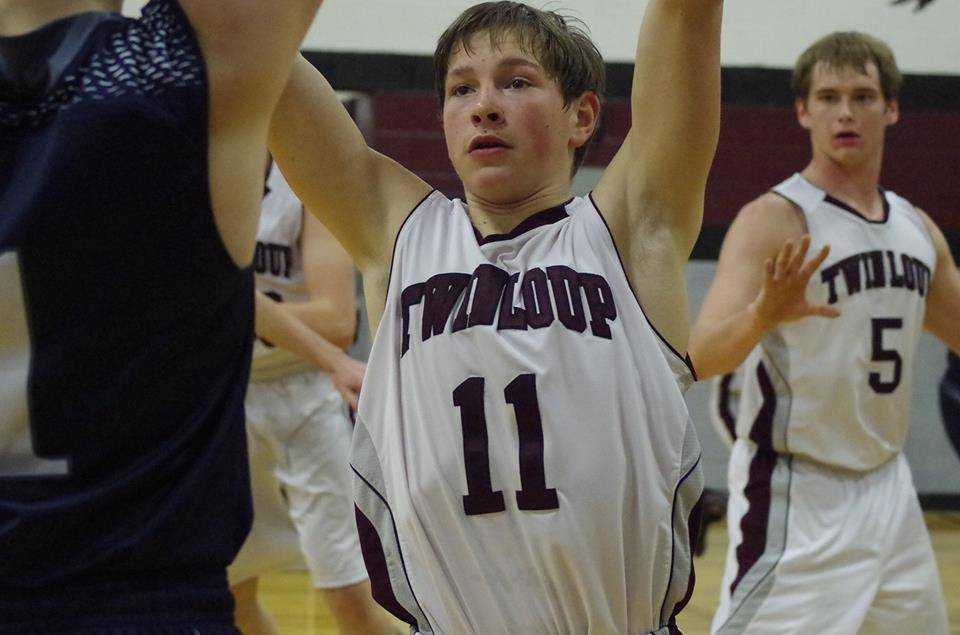 Twin Loup's Alex Horky. The dude can play a little hoops too.

*Alex Horky-Twin Loup - The 5-9, 165 pound junior was all over the place in Twin Loup's huge 42-23 win over pre-season rated #2 rated Sandhills-Thedford. Horky and the Wolves of Mike Kozeal let the Class D-2 field they will be a force to be reckoned with in 2016.

Horky rushed 19 times for 149 yards and scored two TDs, one coming from 42 yards out. On defense #20 was a monster, making 22 tackles and creating havoc for both the Sandhills-Thedford passing and running games.

So efficient was the Wolves "D" that Knight QB Jacey Nutter, who is receiving D1 looks, could only complete 7 of 21 passes for 134 yards and 3 TDs. Hold on though, Nutter suffered 2 interceptions. In addition, All-State prospect Riggen Anderson was held to 54 yards on 16 carries on the night.

I'll give you some information on Coach Mike Kozeal up there in Sargent. Rock hard builder of tough young men in Sargent, Nebraska. The man, who has compiled a 131-58 career coaching record, including a D-2 state title in 2011, knows how to mold a winner in 8-Man football......and they are tough.

Mike was one of my 1000 yard rushers from Sargent back in 1982, running for 1,682 yards, and he was one rugged, pure football player through and through.

Let me tell you how strict a disciplinarian and how businesslike he approaches the game of high school football.

In 2009, I believe, a young Sargent team was playing in Pleasanton against a very senior oriented, experienced Bulldog football team. I believe Mike's son Tyke may have been playing quarterback at the time. Anyway, Tyke absorbed one of the most brutal hits I had seen in years on a QB keeper. The youngster ended up right at the feet of Coach Kozeal and was in great pain. If I remember, he may have suffered a broken leg.

Mike looked down for a few moments, called the trainer over, then gathered his team to map out the next play. Do not get me wrong, Mike Kozeal is a compassionate and loving man, but he expected his son to tough it out because there was football yet to be played that night.

This gentleman is one of the best there is in the coaching ranks and now you know how Alex Horky and his buds delivered that 42-23 win over S/T.

This is Mike Kozeal football, friends.

And how cool is that to have a man named Clarkson coaching Clarkson/Leigh? Jim Clarkson is originally from Clarkson right? Nope, not even a Nebraska boy. Can't have everything, you know.

Heckenlively, an C-1 All-State RB a year ago, simply has all the tools and is worth the price of gas and admission to watch perform. Throw in starters returning at 14 different positions and you have the makings of a special season way down in the SE corner of the state.

In addition, Darin Fritz is one heck of a football coach!

*David City Aquinas "D" and Lane Napier - Opened the season with a 48-0 trouncing of Raymond Central. In that contest, that vaunted Monarch defense held the Mustangs to

26 yards of total offense including a minus 8 yards rushing.

All-State RB/LB Lane Napier scored 5 touchdowns in the game for the defending C-2 state champs. Napier scored his TD runs from 1, 12, 1 and 4 yards out and also hauled in a 35 yard reception, good for another score.

Running like a well-oiled machine, the trio got it done in the Storm's 34-3 opening win at tough York.

Moses ran for 116 yards on 10 carries and scored from 7 yards away. Brayton Haley ran for 33 yards, but hauled in 4 Wright aerials for 82 yards, and Braden Wright? Ran the team like a pro, baby.

Wright completed 11 of 19 passes for 146 yards and a touchdown in the win and helped the Storm play error free football in that rugged season opener on a slick field.

A couple of juniors, Cade Pilkington and Jared Jennings were sparklers on defense. Pilkington and another junior, Mick Williams pirated pases in the contest. And let us not forget, sophomore Hunter Jones, junior Keaton Hoeke and senior Matt Slominski recovered fumbles in the game. Slominski turned his into a touchdown run.

......Footnote* - Do not think for an instant this York football team won't be a force in 2016. Glen Snodgrass is too wise and players like Damon Kaliff and Alex Kowalski are too proud for it to be any other way.

*Brody Belt, Giavonni Guido and the Millard West "D" - Belt, the junior running back, rushed for 152 yards on only 10 carries and scored from 8, 40 yards out in the Wildcats opening night thrashing of Millard South.

That Wildcat offense ran only 34 plays in the game, scoring on 8 of those. YEAH. The Millard West defense also limited Millard South to just 154 total yards in the game.

BDS had to replace some great players from that D-1 championship squad, but this group should not suffer in Class D-2 this season. That's the way those boys play the game down there. They love putting the hurts on ya.

*Kipp Hergenrader-Lincoln SE - The 5-10, 175 pound senior ran for 151 yards on only 14 carries in the Knights season opening 48-21 victory over rival Lincoln NE. Hergenrader's 151 yards are 34 more than he gained all of last season as a junior. Scouts honor.

Kipp's scoring runs came from 4 and 31 yards out.

This may be a pretty good football team there at Southeast with Division One prospect Sterling Smith and dandy junior quarterback, Jack Strong in Ryan Gottula's stable. Stay tuned.

*Tivon Phillips-Lincoln NE - How about that Bubba, two hundred yard rushers in a Class A Lincoln public school game. Warms my heart.

Phillips is a good one and showed why by running for 139 yards on 18 touches in that loss to Lincoln SE. Tivon scored from 10 yards out, then later dazzled the Seacrest crowd with a 64 yard scoring sprint.

*Rhett Harms-Crete - D1 recruit scored the winning touchdown in the 2nd overtime in the Cards 34-31 win at Seward. Harms ran for 118 yards on 20 carries and scored from 9 and 5 yards out.

This young man can play the game, especially on defense.

*TJ Davis-Boys Town - Quarterback rallied the Cowboys back from a 14-6 deficit to beat Syracuse 20-14 in a hard fought road win for Kevin Kush.

Tia'yre Blakey also returned a kickoff 80 yards for a touchdown in the big road win.

Keep an eye on this dude.

*Carter Terry-Grand Island Northwest - If this sophomore had jitters before his first ever varsity start, you'd never have noticed.

Stepping in the shoes of departed superstar Christian Ellsworth, the 5-9, 150 pounder proceeded to have a hand in all 5 Viking touchdowns in Northwest's 34-0 pounding of visiting Gering.

I'd say that's a heck of a way to splash into a starting QB slot. Keep up the good work Carter Terry and tell the boys no more of those 15 yard "you know whats." Can't be doin that, don't 'cha know.

*Joseph Krause-Seward - Sophomore Quarterback completed 13 of 22 passes for 255 yards and 2 TDs in the Bluejay's double-overtime 34-31 loss to Crete.

How about these young quarterbacks this season, and in Class B and C-1 to boot!

*Justice Stutzman-Stapleton - 165 pound junior RB/DT ran 17 times for 193 yards and 3 TDs in that win over Hitchcock County. 165 pound defensive tackle? That's what you have to do when you have a roster of only 13 players.

*Simants Boys-Stapleton - Senior Sid and sophomore Seth recorded 18 and 14 tackles respectively for the Broncs in the Hitchcock "W".

*Will Miller-Hitchcock County - Senior ran for 204 yards on 28 totes, scored 3 TDs, caught 3 passes for 11 yards, had 5 tackles, recovered a fumble and ran in a 2 point conversion in that 58-30 loss to Stapleton.

*Cade Schimonitz-Paxton - QB made life miserable for bitter rival Maxwell by running for 210 yards on 14 carries (15/carry), made 5 tackles and blocked a punt in the 51-21 romp.

*Caiden Goff-Elkhorn Mt. Michael - 5-11, 175 senior gained 180 yards on 24 totes and scored a TD in the Knights 18-0 shutout of South Sioux City. Goff also recorded 10 tackles, forced 2 fumbles, knocked down 2 passes and had a sack in the game. It was also reported Goff consumed 6 burritos in 10 minutes at Maximos Cantina after the game.

*Keaton Robb-Morrill - Sophomore rushed 13 times for 151 yards and scored on a 79 yard TD run in the Lions 42-6 loss to Garden County.

**We like the drop down to 8-Man football category**

*Breydon Mlady-Atkinson West Holt - 242 yards on 26 carries in the Huskies 58-34 win over Plainview.

*Payton Allen-Ainsworth - 170 pound junior QB punished Ravenna with 191 yards on 21 carries and 3 TDs. Also had 8 tackles and a recovered fumble on defense, then launched a 41 yard punt on his only attempt on the night in the 46-24 win over Ravenna, who also dropped down the 8-Man ranks.

.........I'll be taking in the Wahoo Neumann/Scotus game in Columbus this Friday. Have not yet seen Noah Vedral on the gridiron.