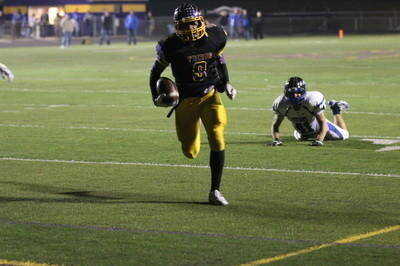 And you thought there was only one group of these opening night stars. No way, Jose, there were too many standouts to limit this to one article.

By the way, I thought it worth mentioning that there is no particular order to these players of the week. I just randomly choose who goes what day and where. The young man or team mention at the conclusion of the blog is no less important or deserving than the first.

That's the way I do things. And there are instances I leave deserving names off but that is only due to the fact I did not run across the deserving player(s) during my research.

So please, feel free to submit a young man or team if you feel they deserve a mention on here. I love it when I get submissions.

*Jaylin Bradley-Bellevue West - Let me tell you, if Jaylin isn't the best running back in the state, he has to be close.

Against Papillion LV South Friday, the 6-0, 190 do-it-all RB bolted for 226 yards on 25 carries and 2 TDs in the Thunderbirds opening night win over a good Papio South team.

Bradley reached the end zone on TD runs of 59 and 4 yards and returned a kickoff 93 yards for another TD. You can expect to see a ton more where this came from.

On defense, Sam Vanderslice and Kevin Ponec recorded 7 tackles apiece while Malcolm Lee chipped in with 6.

*Jacob Johnson-Fairbury - The sensational junior could only squeeze out 10 carries from Coach Kameron Lenhart in the Jeffs 47-3 romp over David City, but Johnson made the most out of it with by running for 160 yards and 2 TDs.

The 195 pound Johnson, who rushed for 1,503 yards as a sophomore, raised his career rushing total to 2,384 yards (31 TDs) after the first game of his junior season.

This young man is a special player.

Bruner also made a whopping 14 tackles from his MLB position. This guy is again, a strong, strong candidate for all-state, especially at linebacker.

*Dawson Graham/Bennett Folkers - Gothenburg - This pass/catch duo hooked up for 22 and 72 yard touchdowns as the Swedes knocked off Class B Holdrege 17-14 to begin the 2016 season.

Graham, a twice all-district football player and All-State basketball selection, has started at the quarterback position since his freshman year for the Swedes. Folkers, like some other Gothenburg players, just seem to emerge as the season progresses and some pop up during the playoffs. Sneaky bunch, those Swedes.

All-State kicker candidate Dominic Long also booted a 22 yard field goal in the game which proved to provide the winning margin for Gothenburg. Keep an eye on this young man.

*Dylan Gentrup-Boone Central/Newman Grove - Man, did this 6-0, 185 QB/CB get things started the right way for the Cardinals last Friday or what?

The junior QB rushed 23 times for 142 yards and 2 scores and completed 4 of his 8 passes for 129 yards in Boone's 27-21 victory over Pierce. Cool thing about that is the fact that two of his four completions went for touchdowns.

Classmate Cody Nelson, a 6-2, 180 pound junior gathered in TD receptions covering 31 and 87 yards in the win. Add in Gentrup's two short TD runs of 1 and 3 yards and you have enough points to beat a Mark Brahmer squad.....and he just doesn't lose many.

Three cheers for Coach Mark Hudson for the job he is doing in Albion after moving in from a successful FB stint at Ravenna. Hud is terrific human being, coach, and teacher/leader of young people. Love that guy!

The Patriots were already in a precarious position trying to replace graduated QB Brecken Reed. So, Dawson Eckhardt gets the starting nod at quarterback and lasts One series before going out with a broken collarbone. Enter Freshman Evan Johnson.

Okay, so Kearney Catholic beats up on Adams Central even worse when A/C loses their starting RB, Caleb Ackles (shoulder) in the 2nd quarter. Despite that, young Evan Johnson came in and completes 12 of 22 passes for 212 yards and a couple of touchdowns in the 53-21 loss.

Speed merchant Drake LeBar caught 3 Johnson passes for 142 yards, one being a 75 TD catch. Cole Spady had a 30 yard TD catch and hauled in 4 passes for 44 yards.

You have to feel bad for this football team who is already reeling from the late transfer of their 1000 yard RB to Doniphan-Trumbull.

*Quentin Moles-Bloomfield - Keeping with the rich running back tradition up there in Bee country, the 5-10, 180 pound junior rushed 42 times for 223 yards in the Bee's 36-22 loss to powerful Wynot.

Bloomfield had the game square a 22 at the halftime break, but a 22 point 3rd quarter by Wynot spelled doom for the Bees.

Moles also recorded 8 tackles on defense and a fumble recovery as well. Moles' classmate Reece McFarland, the Bloomfield quarterback, added 116 yards rushing to the cause.

*Wyatt Hamer-Battle Creek - Immediately stepped up to fill the shoes of departed 1000 yard rusher Derek Renner (1,799 yards). Hamer wasted no time against a terrific Yutan team, running for 171 yards on 25 carries and a 37 yard TD gallop in the Braves 20-14 victory.

Hamer, the 5-9, 185 senior, was only 95 yards short of a thousand a year ago in a backup role. The dude already has 1,471 yards and will probably double that this season alone.

That was a huge win for #4 Battle Creek over #6 Yutan and Mr. Hamer will make this list several more times in 2016, rest assured.

*Tristin Anderson-Omaha South - C'mon man, it's difficult to gain yards for Omaha South and this guy seems to do it every game. Friday, Anderson ripped Omaha Benson for 207 yards on 25 totes and 2 touchdowns. That's 8.3 yards a carry.

If you recall, Tristin Anderson ran for 1,065 big ones a year ago for a 3-6 football team. Those babies were earned the hard way Bubba.

*Dalton Tremayne-Ponca - Quite the night for the Ponca standout in the Indian's 27-26 Thursday night win at Fremont Bergan.

The multi-talented sent shockwaves through the Bergan faithful by returning the opening kickoff 80 yards for a score. The with 2:45 left in the quarter, Tremayne slipped in from the one to give his team a 13-0 lead.

Late in the contest, with Archbishop Bergan leading 26-21, the Knights turned the ball over in Ponca territory. Next thing you know, Dalton Tremayne is off to the races with a 78 yard pitch and catch TD jaunt.

That proved to be the winning score as the Indians pull off the one point win on the road.

*Dylan Plautz and Caleb Schweigert-Omaha Westside - Yes, I realize the Warriors were blown out by Prep but this junior quarterback/wide receiver duo deserves a mention here.

A year ago, Lane played in the shadow of three time 1000 yard rusher Gideon Monette but just may duplicate that feat himself before it's all in the books for this kid.

Name of the Week: