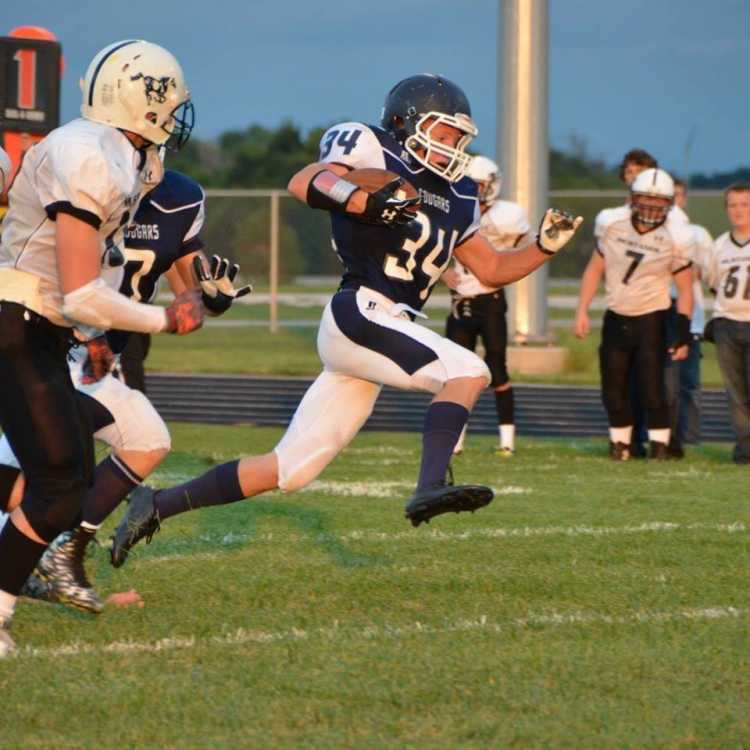 There is no doubt that these articles have to be one of the most exciting pieces of the high school football season for me.

Granted, there are many unsung heroes making these salutes possible, but they know that and are happy to be a part of the big picture.

Week one was saw a plethora of huge games, so let's get started with our salutes to kick off the 2016 Prep football season.

Dim those lights, hit the spots and raise that curtain. It's show time!

*Tanner Lamoree-Cross County - It took about 24 minutes for Cross County to make the adjustment from 8-Man football to 11-Man last Thursday in Norfolk. After spotting Lutheran High NE a 13-0 lead, the Cougars turned Tanner Lamoree loose and the rest is history.

The talented senior also added 9 tackles on defense for the Cougars.

*Max Mason-Scottsbluff - The 5-6, 160 pound Bearcat speedster was rarin' to go against Hastings High Friday night after going down in the 3rd game of the season a year ago. The elusive Mason, who rushed for 429 yards in that limited time a season back, let the visiting Tigers have it on the very 1st play from scrimmage.

Mason exploded for a 91 yard touchdown run before Hastings could even get settled in, then rushed for 158 big ones on 11 carries to finish that first half.

Max ended the night 230 yards on 29 totes, adding a 15 yard TD gallop in the 2nd half. That lifted Scottsbluff past a spirited Hastings squad, 21-13.

The Tigers Tate Pfeifer ran for 111-18 carries in the loss.

*Ryan Dailey and Noah Vedral-Wahoo Neumann - The 145 pound Dailey was the 4th quarter hero for Neumann as the pre-season #2 Cavs turned back #1 Norfolk Catholic 14-7 in an early season battle for Class C-1 supremacy.

The 5-8 Dailey first intercepted a Myles Vrbka pass in the end zone to prevent a go ahead touchdown, then caught Neumann's go ahead TD pass with just 4 minutes left in the contest. By the way, Dailey was giving up 7" in height when he picked off that pass.

Vedral, the Central Florida commit, tossed two TD passes in the game, the 3 yarder to Dailey, and a 31 yard beauty to Reid Jurgensmeier. Noah also rushed for 91 yards on 12 carries in the victory.

*Matt Masker-Kearney Catholic - The rifle-armed, sharp shooting junior riddled Adams Central with 322 yards on 7 of 14 passing in the Stars 53-21 trouncing of the Patriots. The 6-4, 210 junior, who threw for 1,724 yards and 20 TDs a year ago, tossed 3 scoring passes in the Adams Central win.

Two of the scoring strikes went to John Husmann (25, 30 yards), the other being gathered in by all-around athlete Brady Holtmeier (8 yards).

With the receiving quartet of the aforementioned 2 players plus Eric Pacheco and 6-4, 200 pound junior Brett Kaiser, Maskers passing numbers will probably increase this season. That is a scary thought for opposing teams.

Not only did was the margin of victory and points scored against a Gene Suhr (another supercoach) coached team shocking, but the 612 yards of total offense really stunned the 8-Man world.

All-State QB Grant White completed 26 of 30 passes for 423 yards and 6 touchdowns on the night. In the first half alone, the multi-talented White was good on 18 of his 20 aerials for 272 yards and 4 TDs.

*Zach Clausen-Lincoln Lutheran - This kid started for Lutheran last year as a Freshman, a 6-3, 180 pound Freshman. Okay, Clausen had 8 TD passes but suffered 19 interceptions, I realize that. But he also was true on 53% of his 216 passes for 1,456 yards and couldn't even legally drive a car yet.

In a season opening 40-6 win over Humboldt-TRS, Clausen let 'em have it early by scoring on an 83 yard TD run. Clausen then found Logan Kreizel for a 92 yard scoring pass.

Yep, Zach Clausen had a hand in every Lincoln Lutheran TD. You think kid isn't a player?

Hoss scored on shorts bursts of 1, 1, and 4 yards and caught a 7 yard TD pass. Smith also had 6 tackles on defense, one of which was a sack.

*Jacob Frenzen-Columbus Lakeview - Head Coach Kurt Frenzen's sophomore son rushed for 157 yards on 17 carries and scored on a 43 yard TD sprint as the Vikings opened the 2016 campaign with a 30-14 win over Milford-Dorchester.

I've been waiting for this kid to get to the high school level and I can imagine how Kurt has anticipated his arrival.

Sophomore Jaden Johnson, making his first career start at quarterback, ended the win by completing 5 of 12 passes for 111 yards and 2 TDs. Johnson also rushed for 31 yards on 10 attempts.

Sophomore Nick Henrich recorded 8 tackles for the 'Dogs. Andrew Henrich and Huntore Monroe added 6 each as the Bulldogs registered 9 tackles behind the line of scrimmage on the evening.

That vicious Burke "D" also had an interception (sophomore Jacob Fiala) and 2 fumble recoveries, one each by Andrew Tuttle and Cory Nieland.

Sophomore Tyler Chandler also sparkled in his first career start at QB, completing 6 of 9 passes for 116 yards, including a 72 yard scoring strike to Alec Ellis.

*Thomas Young-High Plains Community - The multi-sport star completed 12 of 20 passes for 158 yards and 4 TDs and added 126 yards rushing plus 2 more tallies Friday night. In the end Thomas was responsible for 6 out of 7 of the Storm's touchdowns in their 52-28 win over a good Henderson Heartland team.

Young also made 11 tackles on defense and had 94 yards in punt and kickoff returns. 'Spose he slept well Friday night?

*Austin Stuhr-Henderson Heartland - The outstanding Stuhr had his usual tremendous Friday night in the loss to High Plains. The always superb senior rushed for 255 yards on 25 carries and 4 TDs, including a 56 scoring yard scamper.

Thramer also picked off a pass in the win, while classmate Shayne Campbell recorded 7 tackles on "D" for O'Neill.

This O'Neill football team will make some serious noise this season.