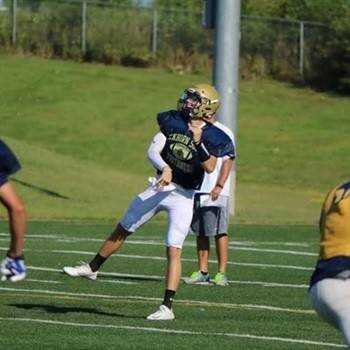 The rains stayed away from scenic Levitt Field in York on an overcast, sometimes drizzly evening as the defending Class B champion Storm took advantage of those Duke turnovers and a 20 point 3rd quarter to pull away from the home team.

The Storm racked up 391 total yards on the evening, while limiting York to 269 yards, most of which came in the 1st half with a healthy Damon Kaliff at quarterback.

The rugged 2-way York athlete pulled up with a cramp that appeared to be in his right hamstring and just could not go after an opening 3rd quarter drive. Kaliff had rushed for 75 of his 79 total yards in the opening two quarters.

Despite a rash 1st half penalties, Coach Glen Snodgrass kept his York forces within 7-3 when the gun sounded, ending the opening half. The Duke defense was mostly excellent throughout, but Kaliff suffered 2 interceptions, one in each of the first 2 quarters, to snuff out drives.

Elkhorn South set the tone for the classic season opening battle between #1 and #3 by fashioning an 11 play drive that consumed 4 minutes, 30 seconds. Two-time All-State sensation Moses Bryant gave the Storm great field position by returning the opening kickoff 27 yards, from the 15 to the Storm 42.

Outstanding senior QB Braden Wright capped the drive with a 5 yard scoring strike to a well covered Jaden Jennings in the right corner of the endzone. Sean Thompsen booted the PAT through, giving the Storm an early 7-0 lead.

Bryant toted the ball 4 times for 39 yards on the scoring possession.

York would immediately answer with what appeared to be a sweet 67 yard touchdown scamper by junior Simon Otte but the Dukes were whistled for illegal motion infraction, snuffing out the nifty run.

The York offense would not, however, be phased with the early heartbreaker. With a minute 52 left in the 1st quarter, Kaliff and the Dukes had a nice drive going. York moved the ball from the 19 all the way to the 49 before Elkhorn South junior DB Mick Williams pirated a Kaliff aerial.

York did also move from its own 37 to the Elkhorn South 13 but had to settle for a 28 yard Jorre Luther field goal with 4:40 left before halftime.

Defenses continued to dominate for the remainder of the 2nd quarter as the score remained 7-3 at the half with the Storm on top.

Kaliff came out to begin the 3rd stanza, marching the Dukes to the Elkhorn South 47 before a 3rd down and 13 pass fell incomplete. Kaliff would never return to action following that drive.

Elkhorn South wasted no time responding on the ensuing drive. Moses Bryant, who did not carry the ball in the 2nd quarter, took a 2nd down pitch from Braden Wright and swept around his left end for a breathtaking 46 yard ramble.

Six plays later Bryant took it in standing up from 8 yards out to give the Storm some breathing room, 13-3 with 6:06 left in the 3rd.

The turning point of the entire battle may have occurred on York's ensuing possession.

Duke backup quarterback Nick Westkamp completed a pass to future all-stater, Garrett Snodgrass for a short gain. A host of Storm defenders rushed in to tackle Snodgrass, but in the middle of the dogpile, senior Matt Slominski apparently stripped the ball and emerged from the pile for a 20 yard touchdown.

Thompsen again added the PAT kick and the Dukes were in shock, now trailing 20-3 with nearly no time elapsed between the pair of Storm touchdowns.

Elkhorn South quarterback Braden Wright would add a 14 yard TD run to close out the 3rd stanza, then a 13 yard scoring sprint with 8:24 left in the 4th quarter to cap the scoring for the contest.

Despite toting the ball only 10 times in the game, two time 1000 yard rusher Moses Bryant took game rushing honors with his 116 yards and a TD. Storm quarterback Braden Wright added 51 yards on 12 carries and 2 scores, while rugged 6-0, 195 pound Brayton Haley chipped in 33 yards on 10 tries.

Sophomore Jason Carlos came in late in the game and ran for 37 yards on only 5 touches, looking sharp in the process.

Wright completed 11 of his 19 passes for 146 yards and a touchdown for the night. His favorite target was Haley, who hauled in 4 receptions for 82 yards.

York's Damon Kaliff completed half of his 16 passes for 135 yards before leaving the game. His 79 yards on 11 carries also led the York rushing attack.

The glaring stat of the game had to be York's 5 turnovers while the Storm was playing without a single one. While York will without a doubt, rebound to enjoy a terrific season with a deep playoff run, this Elkhorn South football definitely hit the ground running to open the 2016 campaign.

It was easy to see Head coach Guy Rosenberg and his staff had a great summer of preparations with this Storm football team. This team will be an early choice to make it back to Memorial Stadium to defend its Class B crown.

Looking ahead to next week, Elkhorn South will return home for a Thursday night marquee matchup with Omaha Skutt. If the Storm win this baby by more than a touchdown.......look out.

York will try to get back on track when they travel to Lexington for a Friday night matchup against the Minutemen.