In the Shadows of the Headlines - Real Time Players-Part 2 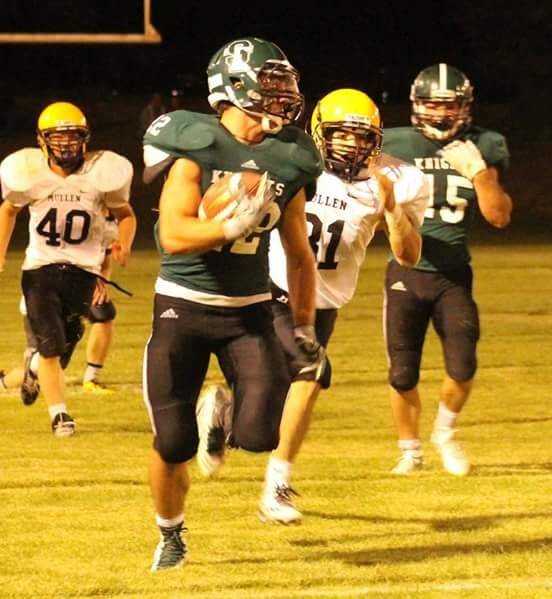 Sandhills-Thedford fiery MLB/TE Cade Pokorny (#22). He'll hunt you down on Friday nights if you're wearing any other color than green.

In the Shadows of the Headlines - More Real Time Players.

Time to salute more blue collar warriors who just can't for the Friday Night Lights and and are not concerned if they make the headlines or not.

These are just pure football men who operate in the shadows of the marquee players who grab all the headlines. Without the efforts of these fellas, good football programs would not become great football teams.

Cade Pokorny-Sandhills-Thedford - 6-1, 210, Sr. (TE/LB) - Oh my goodness, talk about playing with emotion! Pokorny, a Stapleton transfer a year ago, is about as intimidating as any linebacker can get. Great lateral movement and off to the man with the ball an instant after it is snapped. 102 tackles, 11 for losses and on offense, a team leading 541 yards and 8 TDs in 2015. This is the reason why the green clad Knights are D-2 title contenders this fall. Sure fire All-Stater in 2016.

Chase Hoffschneider-Burwell - 6-3, 200, Sr. (DE/TE) - The other bookend opposite All-State Tyler Gideon. Now you know why Burwell is pre-season #1 this fall. Hoffschneider made 87 tackles a year ago, including a team leading 15 in the State Finals loss to BDS. I kid you not, Chase Hoffschneider may be as physical as Gideon and that is horrible to Longhorn opponents in 2016. Do you recall BDS getting ready to score in that title game, coming out in a strange formation at the Burwell 12? Also do you recall Hoffschneider busting through and spilling the QB for an 8 yard loss? Clutch, baby.

Cameron White-Exeter-Milligan - 6-4, 200, Sr. (OG/DE) - This stud, the only returning lineman for the Timberwolves to start the season and all the through that baby, matter of fact. Don't worry about White's stats, he doesn't need to grace those columns. This kid is gonna end up being one of the best lineman in all of 8-Man football.

Nolan Plagge-West Point Guardian Angels CC - 6-1, 185, Sr. (QB/LB) - Better classify Plagge under the Dual Threat category as in quarterback. Last season Plagge threw for 929 yards and 11 TDs and rushed for an additional 582 yards and 11 more scores. And this was with college prospect Tanner Hass in the backfield. A sure handed QB, Plagge handled the ball 163 times in 2015 and fumbled only once and did not lose the ball. Nolan also pirated 2 passes for the Bluejays. This team could contend for a title in 2016.

Hayden Miller-Nebraska City Lourdes - 6-1, 185, Sr. (QB/DB) - Say....you don't by recall this guy leading the Knights to a State Basketball championship last March, do you? Miller is the real deal, tossing for 1,219 yards and 15 TDs a year ago. Hayden also ran for 543 yards (10 TDs), made 57 tackles on defense (42 solos) plus handling the punting and kickoff chores. I saw this kid play at East Butler last year.....smooth as silk as a QB and easily scrambles out of trouble.

Matt Neiman-Brady - 5-11, 180, Sr. (RB/LB) - Oh man, what a punishing runner Neiman was in 2015. 1,446 yards and 27 scores is all. Truly one of the top runners in all of the 8-Man ranks. The multi-talented Neimann accumulated 1,877 yards of total offense and added 56 tackles on defense, of which 42 were solos. Not many better all-around athetes in small town Nebraska prep football than Matt Neiman.

Caden Houghtelling-Cambridge - 6-5, 225, JR. (QB/LB) - Holy bloodlines batman! And of course, ain't no Houghtelling that isn't tall don't cha know. Talk about strong and fast, the splendid junior runs a 4.7 and benches.......you heard correctly, 300 pounds. And, the impossible finally happened at Cambridge......the program dropped to 8-Man football for the 1st time in it's glorious history. Not to worry, Houghtelling threw for 819 yards (5 TDs), ran for 443 (3 TDs) and punished folks from his LB position. Trust me, the Trojans will be better off in the 8-Man ranks with dwindling numbers out for football.

Tyler Swisher-Sandhills-Thedford - 6-2, 225, JR. (OC/DG/K) - As a sophomore, Swisher recorded....listen to this....47 pancake blocks. Yeah, that's when you drill your opponent into the sandhills soil blocking for your O-Line position. Swisher also 97 tackles, 57 were solos and 14 were behind the line. Oh.....that "K" you see after his name up there? Stands for kickoffs. Tyler kicked off 81 times for the Knights in 2015, blasting 44 of 'em into endzone for touchbacks. He averaged 47 yards a boot. Any other questions? Yeah, it's Mister Swisher. Kind of figured you guessed that one.

Cole Bruns-Bloomfield - 6-4, 250, Sr. (OL/DE) - Holy cow this kid is strong. Bruns loves to drill you into the grass on offense and plant you into the turf from his TE slot on defense. This dude actually ran a leg on the Bees 400 meter relay 2 years in a row at the O'Neill Invite. 6th last spring. Very disrupting on defense, Bruns is going to help put Bloomfield in a ratings contender in Class D-2 in 2016. 4 year starter.

Jacob Simonson-Grand Island Heartland Lutheran - 6-3, 175, Sr. (QB) - The tiny GI school west of Stuhr Museum finally drops down where they belong.....in 6-Man football. Simonson completed 55% of his 262 passes last year in 8-Man football for a D-2 leading 2,370 yards and 33 TDs with only 8 INTs. This is for a team that won 3 games and celebrated at that. Simonson should thrive in the 6-Man ranks and should provide fireworks every time the Red Hornets hit the field. He has an incredible target in Jeremiah Reeser......remember that name...that pass/catch duo.

Garrett Caldwell-Superior - 6-1, 220, Sr. (OL/LB) - Just tickles me pink to mention a kid from a Superior football programs that has suffered through a horrible drought playing 11-Man football. The last time the 'Cats had a winning season was 2007. But Garrett Caldwell gives this team hope in the 8-Man ranks, having recorded 71 tackles as a sophomore and 93 a year ago. 11 of those in 2015 were for losses, which earned big Garrett All-District. Keep the fire going Big Guy.

Bryant Jorn-Falls City Sacred Heart - 6-5, 290, Sr. (OL/DL) - Don't tell this guy he's an "under-the-radar" player. Oh, no, no, no. I saw dude play at St. Francis and he eats running backs for a snack and sacks QBs for the main course. Should make Doug Goltz and his Irish a top contender in Class D-2 with St. Francis and Sandhills-Thedford. You know the drill.....it's Mister Jorn.

Colton Leslie-Spalding Academy - 5-10, 170, Soph. (NG/RB) - All-State nose guard as a freshman! Ever heard of a running back/nose guard combination before? Well, in 6-Man football it's possible. Why was Leslie chosen for All-State? Try 90 tackles, 12 for losses on for size. There is no doubt about it, you have to be in shape and be an athlete to play this 6-Man game. You have to be able run around.....a ton. I timed a play in the St. Ed/Hyannis game last year in 95 degree humid heat......22 seconds. Tell me this isn't football. Leslie could be a 4 year All-State pick and has the Shamrocks in a position to get to UNK in 2016.